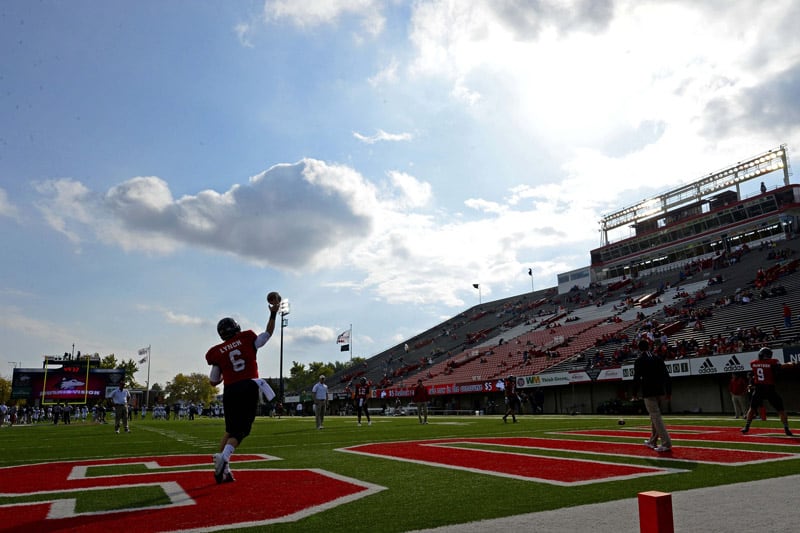 Northern Illinois is having what they termed SchedulePalooza this week, and it will feature a new home-and-home football series announcement each day this week.

Here is their first hint from Twitter followed by my guess:

My guess for the first @NIUAthletics #SchedulePalooza announcement is San Diego State.

The guess turned out to be correct as NIU Director of Athletics Sean T. Frazier has officially announced the series with the San Diego State Aztecs.

“Going forward, the College Football Playoff Committee will be evaluating Group of Five match-ups like this,” Frazier said. “San Diego State is the type of successful program we want to have on the schedule, and it’s exciting to bring a Mountain West Conference team to Huskie Stadium for the first time.”

In the first game of the series, NIU will host San Diego State at Huskie Stadium in Dekalb on Sept. 17, 2016. The final game will be played at Qualcomm Stadium in San Diego on Sept. 30, 2017.

NIU and SDSU have met four times on the gridiron. The Aztecs defeated the Huskies in two home-and-home series played in 1967-68 and 1970-71.

The Huskies now have two non-conference games scheduled for the 2016 and 2017 seasons. NIU opens the 2016 season at Wyoming and travels to Nebraska in 2017.

NIU is San Diego State’s third announced opponent for 2016 and second for 2017. The Aztecs are slated to host California and New Mexico State in 2016 and travel to Arizona State in 2017.

LOL. They are making a big show over playing another mid majors. With all this garbage over 4 days you would expect 4 power conference opponents. The other 3 series better be bigger much bugger than SDSU or this is a marketing dud. I’m talking SEC, Pac 12, B12, ACC s they already have 4 games with Nebraska and 2 with Iowa, 1 with Ohio St, so more B10 teams isn’t worthy of all the hype they are trying to create

Schoupe… NIU has been a perennail mid-major power and Huskie scheduling is very good for a mid-major. You are not NIU’s target demographic. The announcements are intended for fans who appreciate group of five football, MAC, and MWC fans and for potential recruits. But the publicity/hype got motivated you to post on the topic. So the marketing is working.

Really SDSU is much more respected than NIU b/c SDSU gets power 5 conf schools to do home and home..NIU doesn’t. SDSU has home and home with Ore St, Cal, ASU. UCLA, AZ while NIU has no home and homes with power 5 schools.

So far SDSU is a good get since it has been so hard to find teams willing to play at NIU. NIU is usually forced to play away games against Power 5 schools as no one would sign up for home and home. Since 2003, only Kansas has come to NIU. Before that Maryland, Iowa State, and Wake Forest in 2002 and 2003 and NIU is 4-0 in those games. I’m excited so far and hope it gets even better from here.

NIU is a good program but as long as they’re in the MAC they’re never going to get the recognition they’re looking for unless they have consecutive miraculous seasons and even then it would probably be short lived with the way the media works. Just look at NDSU they won three FCS titles in a row capped with a perfect season that includes a win over Kansas St. but very few people care outside of their fan base, unfortunately. Probably beat NIU too!

I feel like the MAC and MWC haven’t played a lot during the regular season, so I’m all in on this cross-country game. Beats the heck out of playing a IAA school or being forced to go on the road against an SEC behemoth.

Geez, give NIU a little bit of slack and credit. At least they are making it exciting for their fans. I hate when people knock the mid-majors. Have some class!

This is terrific stuff. No need to bash NIU, they shouldn’t go into hiding because they aren’t a Power 66 team. This is what they need to do, a nice change from the previous AD who I believe sold out a 3 for 1 with Nebraska for a 4 for 0. Like Southern Miss does currently.

Though not an NIU fan, though quickly becoming a fan of the AD, I’ll play along and guess:

Wed – home to Houston 2019, at Houston 2020, Houston filling holes on their schedule now that stadium issues are resolved.

Thur – at BYU 2015 (or 2016), home to BYU 2017. NIU marketing is righ up BYU’s alley and BYU would want to support, NIU can play non-conf in November, particularly while a 13 team MAC exists and BYU happy to play in Midwest. BYU AD Tom Holmoe also mentioned that a scheduling announcement the fans would like may be upcoming, which sounds like a sixth 2015 home game but this would mean NIU pushing out Murray State, UNLV or Wyoming but that could balance their 2017 home/away balance.

Nebraska plays 7 to 8 home games a year. Teams should stop scheduling them until they play more home and home (or at least a two for one).

Bet anything that one of the series will by BYU.

Easy bet–since someone already mentioned that BYU was planning on scheduling the game… two and a half hours before your post.