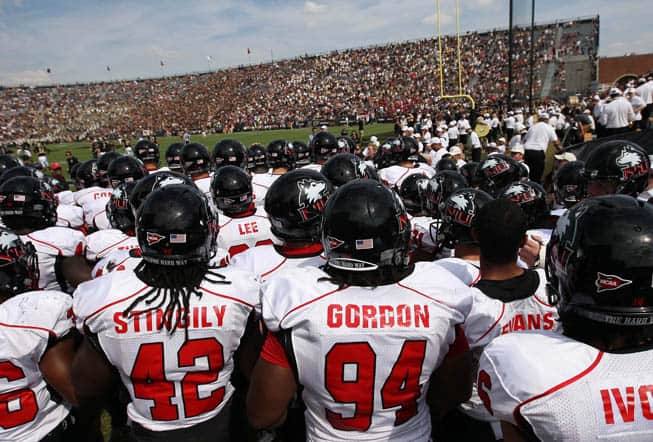 The Huskies host UNLV at Huskie Stadium on Sept. 5 to open the 2015 season. The game is the second half of a home-and-home series that begins in Las Vegas in 2014.

A week later on Sept. 12, NIU welcomes the Murray State Racers of the FCS to town. The Huskies then travel to face the Ohio State Buckeyes on Sept. 19.

The Huskies later host their third non-conference game of the season in Dekalb, this one against Wyoming of the MWC on Sept. 26.

With the standard four MAC games at home, NIU will host a total of seven games at Huskie Stadium in 2015.

“The 2015 schedule closely reflects the model we are striving for in our scheduling philosophy.” Frazier said. “We want to play a minimum of six home games in Huskie Stadium with a seventh being played in the Chicagoland area. Under the new College Football Playoff, we’re going to be measured by strength of schedule and common opponents will be weighed heavily. Games against teams like UNLV and Wyoming will help us in this area.”

How on earth will they get 6 home games the calibre of UNLV (and a game in Chicago) when playing Nebraska and others continually on the road?

You think hosting UNLV is some amazing task? They’re going to CMU in 2016, too. Hell, CMU hosted MSU last year, and they’re getting Syracuse and Oklahoma State at home in the future too. UNLV is nothing compared to those schools.

Those schools won’t come to Dekalb. With the record NIU has had against the Big Ten the past 5 seasons and how competitive other games against power conference opponents have been playing the huskies is not a cake walk game anymore so big schools refuse to add them to their schedule and risk loosing a game the will definitely affect their playoff chances

This is great for Huskies. Not being a top power conference it gives the Mac clout with strength of schedule considerations.