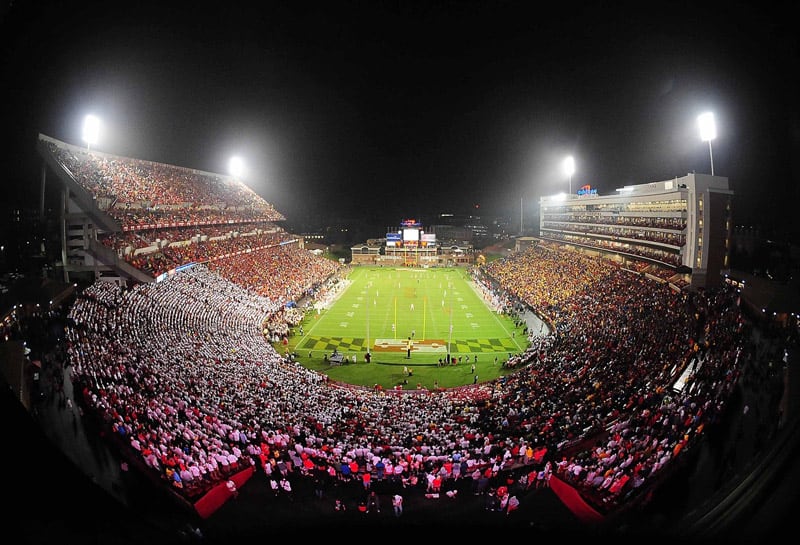 Northern Illinois wrapped up its fourth and final day of SchedulePalooza with the announcement of a future football series against the Maryland Terrapins.

But before the intrigue could continue, Brett McMurphy of ESPN spoiled the fun by tweeting the match-up he learned from a “source.”

“This series with Maryland is a fantastic way to close out an incredible week of scheduling announcements,” Frazier said. “Huskie fans have been waiting for a Big Ten team to visit Huskie Stadium, and so many have vivid memories of the last time Maryland played here. That 2003 game really ignited our fan base, and I hope this announcement and SchedulePalooza have done the same for a new generation of NIU fans.”

“I like what we have been able to accomplish in scheduling with these series so far,” he continued. “We will play quality opponents both on the road and at home, and all of these games help us get where we need to be when it comes to positioning ourselves for the future under the College Football Playoff. There is still work to be done. Every good concert deserves an encore, right? Well so does SchedulePalooza! Stay tuned!”

Northern Illinois will travel to face Maryland at Byrd Stadium in College Park on Sept. 12, 2020. The Huskies will then host the Terps at Huskie Stadium in Dekalb on Sept. 25, 2021.

The 2020 game will mark the fourth time that these two schools have met on the football field. Maryland won the first meeting back in 1996 and then they split a home-and-home series in 2003 and 2004.

good for both schools….

Not a bad week.
Maryland game is great
BYU game is great
SDSU is a good team, decent conference.
Utah is a bad team, but they play in a good conference. So even that was good.
Give the AD Sean a raise.

NIU is positioning itself for a spot in The American, but with OOC opponents like this… they’d be great in the XII, to come in with Cincinnati.

I’m seriously impressed by NIU’s scheduling. All credit to the school.

NIU is doing what Fresno State has been doing for the last 10+ years with bigger programs.
In what universe will an SEC team come to a WAC (2011) school? Ole Miss did. Go Dogs!

This is great for NIU. I’m surprised Maryland would opt for this. Geographically, Maryland will already have a presence in Illinois, because of their new conference alignment. It seems to me like Maryland would want to schedule a home and away series with a school closer to home in a state where their conference isn’t located. I think that East Carolina would be a better match for a nonconference partnership for the Terrapins.

Maryland’s presence in Illinois really won’t be as big as people think. The B1G conference schedule is out through 2019 and Maryland will only have one game each against Illinois and Northwestern and both of those games are in College Park. NIU will also do more for SOS than ECU will (though that can certainly change) so it’s a good thing for Maryland as well. And like everyone else has stated, I am really impressed by NIU’s scheduling. They are certainly not ducking anybody.