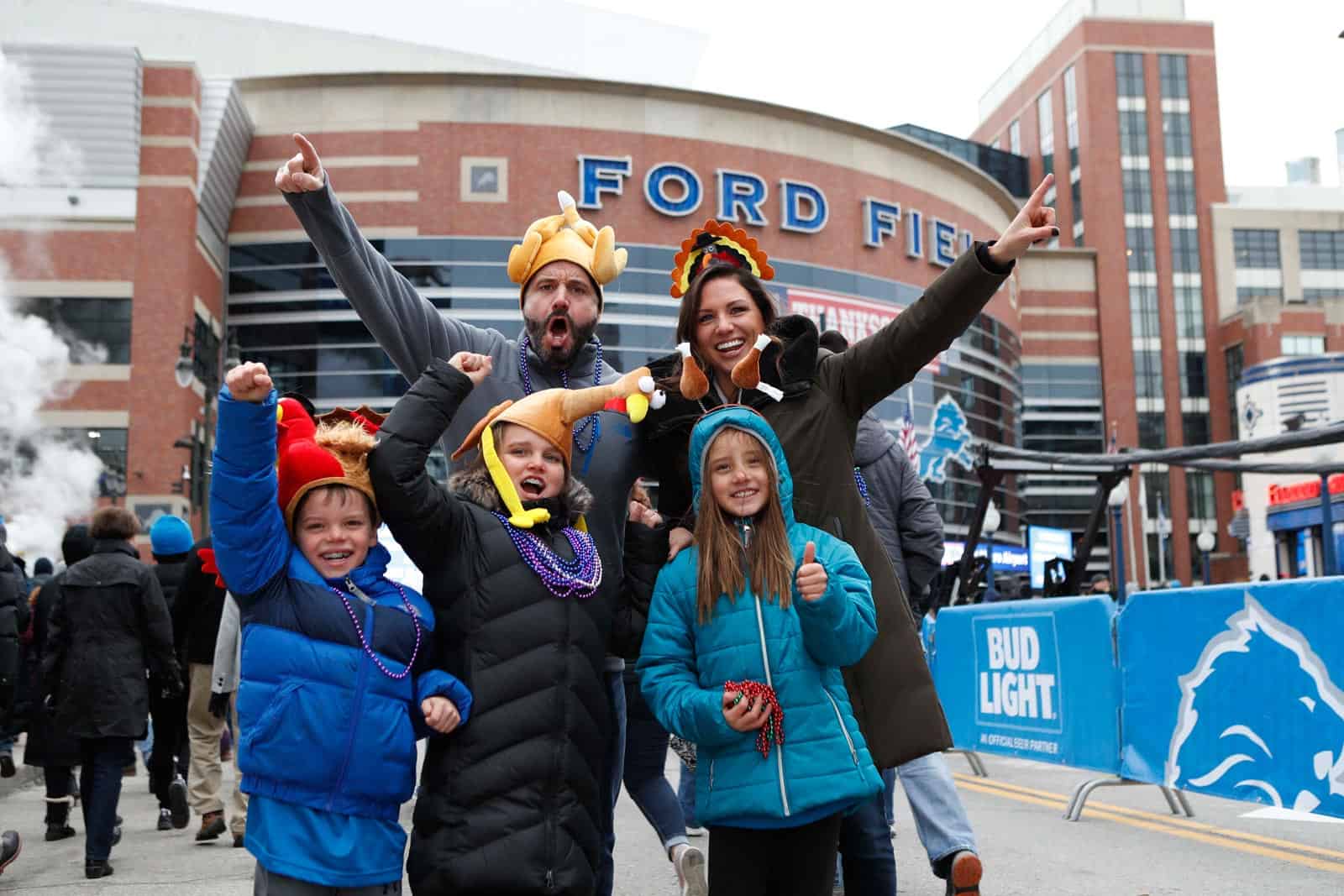 The Lovell family poses in Thanksgiving Day gear before the 2018 game between the Detroit Lions and the Chicago Bears at Ford Field. (Raj Mehta-USA TODAY Sports)

The NFL Thanksgiving schedule for 2019 features three games for the 14th consecutive season.

Turkey day action begins with the Detroit Lions hosting the NFC North rival Chicago Bears at Ford Field in Detroit, Mich. The game will be televised by FOX at 12:30pm ET.

Detroit is currently at the bottom of the NFC North standings with a 3-7-1 record. The Bears (5-6) are just ahead of the Lions, while the Green Bay Packers (8-3) and Minnesota Vikings (8-3) sit atop the standings.

In their first meeting earlier this season, Chicago defeated Detroit 20-13 at Soldier Field.

The second NFL Thanksgiving game in 2019 features the Dallas Cowboys playing host to the Buffalo Bills at AT&T Stadium in Arlington, Texas. CBS will televise the matchup at 4:30pm ET.

Dallas leads the NFC East with a 6-5 record, while Buffalo is in second place in the AFC East at 8-3 overall.

The Cowboys and Bills last met during the regular-season in 2015 in Buffalo. Buffalo won that contest 16-6, but Dallas still leads the overall series 8-4.

The final NFL game on Thursday is in prime time, and it features the Atlanta Falcons hosting the New Orleans Saints at Mercedes-Benz Stadium in Atlanta, Ga. The game is set for 8:20pm ET on NBC.

With an 9-2 overall record, the New Orleans Saints currently lead the NFC South by a full four games over the Carolina Panthers. At 3-8, Atlanta is in last place in the division, a full six games behind New Orleans.

The Falcons and Saints met earlier this season at Mercedes-Benz Superdome in New Orleans, La. Atlanta upset New Orleans in that contest, winning 26-9.

After Thanksgiving, Week 13 NFL action continues on Sunday, Dec. 1 with 12 games, including the New England Patriots traveling to take on the Houston Texans in Sunday Night Football. The Monday Night Football matchup features the Seattle Seahawks hosting the Minnesota Vikings.