NFL rookies get pranked by Madden 15 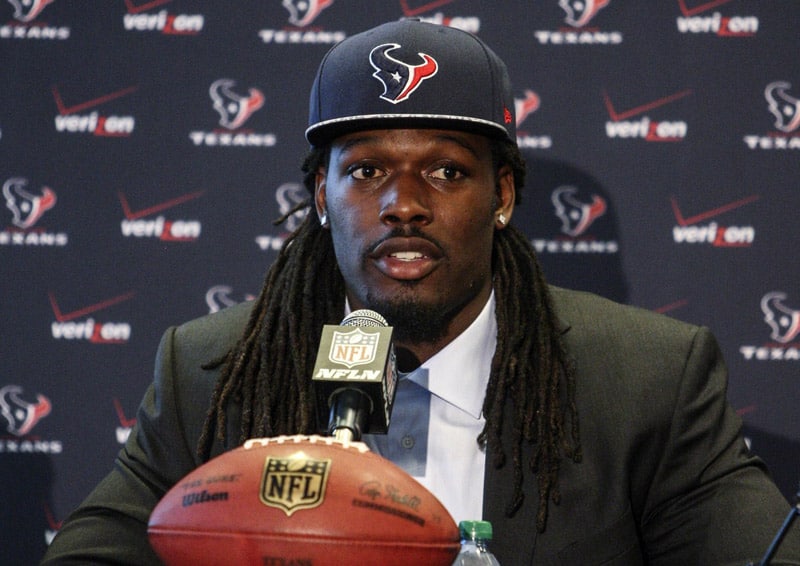 On July 18, EA Sports released a video playing a joke on NFL rookies by asking them to rank themselves on Madden 15 and then telling them their real rankings–far below what the new NFL players expected.

Here’s a look at the featured rookies and where they will be playing this season:

Clowney, both the USA Today’s National and the SEC’s Defensive Player of the Year, played for the South Carolina Gamecocks during his collegiate career. The Houston Texans chose him as the number one overall pick in the draft and will make him an outside linebacker, despite his experience as a defensive end for the Gamecocks. While Clowney had sports hernia surgery in mid-June, he expects to get back on the field for training camp this month.

Bortles was selected as the third overall pick by the Jacksonville Jaguars on May 8 and signed a contract worth $20.6 million for four years. He played for the University of Central Florida Knights as a quarterback and led them to win the American Athletic Conference Championship and the 2014 Fiesta Bowl, where he was the Offensive MVP. While the Jaguars did not plan to start a game with Bortles until 2015, you might see him start in a late preseason game according to Coach Gus Bradley.

Watkins played for the Clemson University Tigers and immediately made an impact on his team his freshman year with 12 touchdowns and 11 school freshman records. He was named MVP for the 2014 Orange Bowl after he set a record for getting 16 receptions for 227 yards. The Buffalo Bills picked him fourth in the draft and he signed a four-year contract worth $19.94 million with a $12.8 million signing bonus. His favorite football team as a child was the Bills and he will be playing as a wide receiver. His older brother, Jaylen Watkins, plays for the Philadelphia Eagles.

Mack played football for the University at Buffalo Bulls and was selected fifth overall by the Raiders during the draft. He redshirted in 2009, won all-conference honors his first collegiate season, tied for first for the NCAA in career tackles with 75 in 2013, and broke an NCAA record for forced fumbles with 16. Mack was the highest selected player ever from Buffalo and will be playing as an outside linebacker for the Raiders.

Despite only starting football in his senior year of high school, he was recruited by the Texas A&M Aggies, where he redshirted as a freshman in 2011. Evans broke a school record in the 2013 season when he caught 7 passes for 279 yards. He ended his 2013 season with the Aggies with 12 touchdowns and 69 receptions for 1,394 yards and was selected as the seventh overall pick by the Buccaneers. Evans will play as a wide receiver.

Ebron played for the University of North Carolina and started all 11 games as a sophomore in 2012. He has played as both a tight end and a defensive end and was a finalist for the John Mackey Award for the nation’s top tight end in 2013. The Lions selected him as the tenth overall pick in the 2014 draft, where he will play as a tight end.

Manziel, also known as “Johnny Football,” redshirted as a freshman for the Texas A&M Aggies, where he led the team to a victory in the 2013 Cotton Bowl Classic. His nickname is trademarked and he has already signed an apparel deal with Nike for a line of clothing. Manziel has also gained media attention for his antics off the field and for his multiple honors and awards during his collegiate seasons. He was the first freshman to win a Heisman Trophy, Manning Award, and the Davey O’Brien National Quarterback Award. Manziel was also drafted by the San Diego Padres as a shortstop in the 2014 MLB Draft. He was chosen 22nd overall by the Browns and will play as a quarterback.

Benjamin played for the Florida State Seminoles and was redshirted in 2011. In 2013, he had 15 touchdowns, including the game-winning one against Auburn for the BCS title, and led the ACC in touchdown receptions. Benjamin is ranked by Rivals.com as the 8th best wide receiver in the 2014 draft and was selected by the Panthers as the 28th pick in the first round.

Hill played for the Louisiana State University Tigers, where he was chosen as the 2014 Outback Bowl MVP in 2013 when he rushed for 216 yards and 2 touchdowns. Rivals.com selected him as the number 21 running back in his class and he was chosen 55th overall in the second round draft by the Bengals, where he will play as a running back.

Vincent Lamont “Tre” Mason III was chosen 75th overall in the third round of the 2014 draft after playing for the Auburn Tigers. In 2013, he was the SEC Championship Game MVP and was chosen as a finalist for the Heisman Trophy. He broke a school record and Heisman winner, Bo Jackson’s, 1,786 rushing yards with 1,816 rushing yards in his last collegiate season. Rivals.com listed him as the 14th best running back in his class, which is the position he will play with the Rams this season.

Rankings began being released on Monday, July 21. For more information, check out Madden 15 on EA Sports.

this is not cool to pranked about them