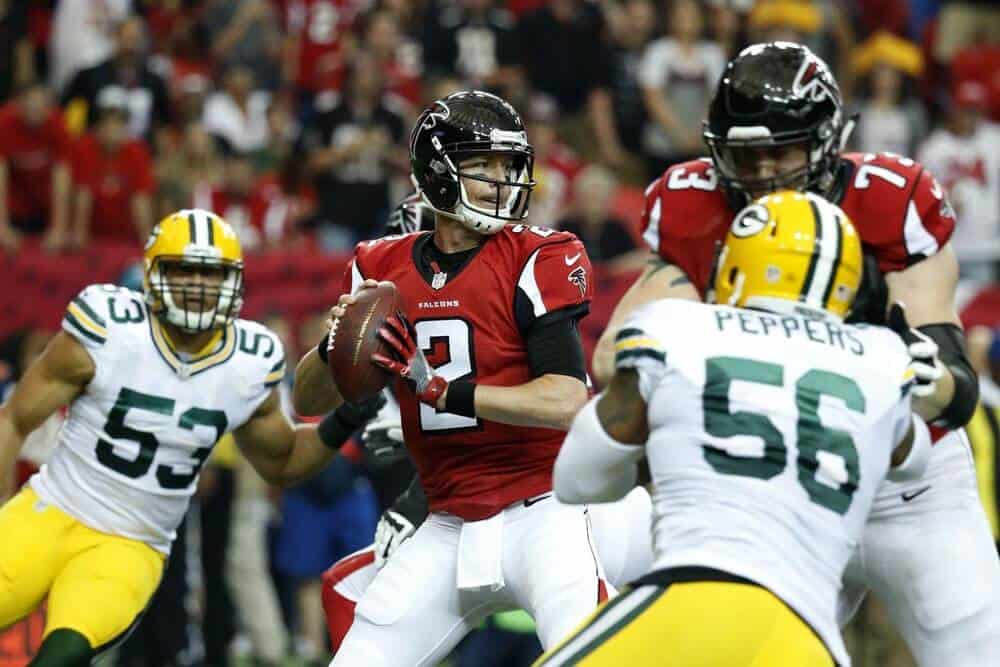 The NFL Playoff Schedule continues this weekend with the AFC and NFC Championship Games. Both games will be played on Sunday, Jan. 22, 2017.

In the NFC, the No. 2 seed Atlanta Falcons will host the No. 4 seed Green Bay Packers at the Georgia Dome in Atlanta. The game will kick off at 3:05pm ET on FOX.

The AFC Championship Game features the No. 1 seed New England Patriots hosting the No. 3 seed Pittsburgh Steelers at Gillette Stadium in Foxboro, Massachusetts. The game kicks off at 6:40pm ET on CBS.

The AFC and NFC Champions will meet in Super Bowl LI at NRG Stadium in Houston, Texas on Sunday, Feb. 5, 2017. The game will be televised by FOX at 6:30pm ET.

When I was a little girl, watching football on TV with my Dad, the Green Bay Packers
symbolized everything good about football. Even though we lived on the West Coast, in Washington State, we knew the Pack commanded respect for their skills and their integrity.
Best Wishes for a great game from a long time fan.

Thats very kind of you speaking of your Father . Wishing i get the same from my daughter one day ……….. GO PACK Bring home the Vince Lombardi trophy

If it wasn’t for the revenue generated at these games there would be no reason to play any of them. Just like I’ve predicted for the last 6 weeks the steelers & fudge packers will win this week with the fudge packers winning the super fixed bowl. Vegas & the n.f.l. and the referees will make sure of it. The officiating is horrendous at best and they determine the outcome of every game that’s played. It so bad now they do not even worry about trying to hide it, and if the team getting screwed says a word, they’ll get it worse. It happened last week except the 2 best teams (Patriots & Falcons, unfortunately they won’t be in the super fixed bowl) in the n.f.l. over came the terrible calls to win their games The constant no calls for holding by the steelers & fudge packers offensive lines is an embarrassment to the referees & n.f.l. as a league that promotes fair play. And now even the broadcasters, analysts, anyone involved is on board and aware of the fixing. The camera angle is set up to justify what ever the n.f.l. wants & the terrible calls made. There are even mysterious penalties called now, that replays aren’t even shown. The n.f.l. has simply become part of the entertainment industry. The way some teams are allowed to play like thugs (steelers, seahawks, broncos, houston) while other teams (patriots, eagles, falcons, lions to name a few) have a flag thrown on them for looking cross eyed at their opponent is just flat out favortism. But the ironic thing is, these teams that the experts say are so good, and have the best q.b. or offensive line (like if you allow them to tackle the defenders without calling a penalty doesn’t help) why do they need so much help from the referees to win. Could it be the biased officiating is actually what makes these teams better than they actually are? Watch Sunday”s games and see how many times the fudge packers get stopped on 3rd down only to have a mysterious penalty called awarding them the 1st down to keep the drive alive. Or watch how many times the Patriots have to pick up the same 3rd down 2 or 3 times. It’s rigged with the fudge packers winning it all with all world, commercial maker mr. rodgers super bowl m.v.p. just like 2 years ago when they handed it to the broncos on a silver platter. Granted manning didn’t win m.v.p. like he would have if it wasn’t for the outstanding game that linebacker had.

Get over it and enjoy the games

Looks like someone’s butt hurt because their team didn’t make it.

Just what are you smoking, dude? And which team of yours obviously didn’t make it? There’s ALOT of hostility and accusations there.

Hey Steve take the tit out of your mouth and man up. Evidently someone pissed in your Wheaties or you weren’t big enough or talented enough to play the game. Don’t watch it if it makes your period start. I bet you don’t eat meat either.

If you really feel that way why waste your time watching the games. I would be willing to bet no NFL player agrees with you.

Your a crybaby and probably a Clinton and Obama supporter. It’s everybody else’s fault. Go protest Trump instead of watching football.

Try watching badminton. It would suit you better. Wah

Get some help man…you need it.
I didn’t watch all season because of the disrespect (SOME) of the players were showing for the flag but I even get over it during the playoffs!

If you feel that way why waste your time watching the games or any football for the matter. Sounds like your team went out early. Hang in there, there is plenty more seasons coming up. Don’t let it eat away at you like that buddy. I actually wish you good luck in the future but don’t let today bother you.

THOUGH THE REFS CAN BE SHADY AT TIMES; THE PATRIOTS WILL PREVAIL!

Way to make an ass out of yourself considering the no blown calls, thug plays or paid referees. Not only were you wrong about that, you were extremely wrong about both teams making it into the Super Bowl, hmmmmm. I wonder if it is still rigged?

Anastasia im a very serious football fan but if you really need evidence just use logic.Alll of the money vegas is worth,do you really think that they dont influence how much money they make?That is way to much money to leave up to chance.

…..take it from someone who worked in Vegas, there’s zero chance they influence outcomes. It’ll sound counter-intuitive but there’s no money in the sportsbooks there

The refs are bad and the NFL is corrupt as shown by deflategate. There is pass interference or holding on almost all plays. And everything is about money. But Vegas has little to do with it.
And when mentioning thugs – don’t forget the Ravens. The way the NFL dresses these thugs up and displays them on TV is a joke. But then, with Trump as President, what does one expect from this Country – fairness, courtesy, integrity, intelligence? LOL
We get what we deserve.

Maybe we could just stick to the subject of Football. Forget about the politics. Save that for some other comment page where they are actually having a conversation about government politics.

Can everyone stop crying? This isn’t politics, it’s football. There are no cry rooms or safe spaces. My team won last year. They’ll give me a championship every 20 years or so. I’m good with that. Get over it.

As a diehard KC fan are you telling me the steelers o-line didnt hold 1 time and draw a flag..n the loudest stadium n the nfl, really!! I saw so many face mask penalties and blatant holds, not 2 mention pass int. no calls, case n point..on the back of Kelce and he had enuf and reacted 2 the no call but immediately drew a flag 4 unsportsman!! Really! Yes we dropped passes that should have won it but it was so obvious by what was being called who was gonna win.

Tim, your team lost get over it. Damn what happened to men these days. It’s a game where it’s played at full speed. Missed calls happen, get over it and just enjoy the game. Sounds like all you do is watch the refs. It’s football, not refscall. Get over it

I will guess this hostility I’m reading in the comments are early signs of football withdrawal.

Comrade Trump said the games are fixed, and 48 million tend to agree with anything he says.

Too funny And so true!?

I like football. The season will be gone soon and I’ll miss the office pool and my fantasy teams.
But that doesn’t mean that I cant see where it is doomed. It will go the way of the gladiators as will boxing. To ‘prevent’ or ‘limit’ concussions, they made helmets. Now helmets are used as weapons. Look at the Jordy Nelson play. Defensive players are taught to hit hard (injure) others. Thuggary works and it is taught throughout the league. It will doom the sport as they will keep trying to limit it with silly rules. High school moms will not want their kids to play it. No matter how hard the NFL pushes pink ribbons and pretends it is a safe and wholesome sport.
I suppose it and I will be anachronisms soon.

Thank you Byron Collum for understanding that my comment was a loving memory, and meant as a tribute to my Dad. I am sad to read comments on the level of those by Steve Johnson and F U. They are not only a reflection on the mental and spiritual capacity of the authors, but also an insult to the NFL, and to thinking people everywhere. When did it become “okay” to use this kind of obscene terminology in a public forum? Now, more than ever, we all need to try to find the best in ourselves and others.

alot bet on sporting events, losers always shout about fixed calls. do you realise the noise created by the stadium, this makes any decision difficult to please any fan. Super Bowl gm won`t have bad calls, so their isn`t a reason for other gms to have them……

I’m a packer fan all the way. Do I get pissed off when the lose or if they lose today? Your damn right I get pissed. Will I throw a tantrum? Small one but surely I will throw one. But come on, some of you guys should be watching sycronized swimming and relax a little. It’s football and it’s not always to go your way like it or not. BUT ,there is always a next season. Grow up.

Enjoy your tantrum, the Pats will win today!

Can you update the PDF schedule for the playoffs? Always fun to post it in my cube and generate conversation. Thanks!

Should be updated now.