NFL to Play Three Games in London in 2014 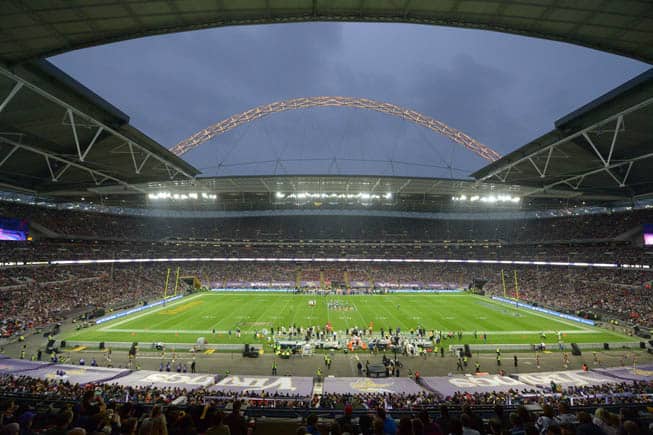 The Atlanta Falcons, Jacksonville Jaguars, and Oakland Raiders will each host a regular-season game in London during the 2014 season, the NFL has announced.

Each game will be played at Wembley Stadium. Dates of the games and opponents for each team will be announced at a later date.

Due to an increase in popularity of the International Series, the NFL is adding a third game next season.

“Our fans in the UK have continued to demonstrate that they love football and want more,” NFL Commissioner Roger Goodell said. “Both of this year’s games in London sold out quickly. The fan enthusiasm for our sport continues to grow. By playing two games in the UK this year, we are creating more fans. We hope that with three games in London next year we will attract even more people to our game.”

Earlier this season in London, Minnesota beat Pittsburgh 34-27 before a crowd of over 83,000. The second International Series game of 2013 is slated for Oct. 27 when Jacksonville hosts San Francisco.

Not even having Japan or rest of Asia playing games down in the near future. Speaking of Japan, American Football is one of the top 3 sports in that country.

I’m sure if Japan throws some money at it, we’ll send some games their way.

Australia too. New Zealand was trying to get a CFB bowl game there back in the 90s(?) so there definitely is some interest heading in that direction.

Over-saturating a single market instead of moving games into a viable stadia in Berlin, Dublin and/or Amsterdam–NFL decisions are questionable–

On that same note—enough with the awkward bye weeks and exended pre-season. Go to a three preseason game schedule (one home, one away, one neutral) and an 18-game regular season schedule over 19 weeks—all teams take a bye during week 10 to eliminate unfair advantages. To address the player injury issue (other union issues as well) allow the 53-man roster to go up to 55.

I think the main reason they make the byes on different weeks is so that fans as a whole can always have something to watch on Sunday even when their team doesn’t play. I like it the way it is, though I agree with all of your other suggestions.