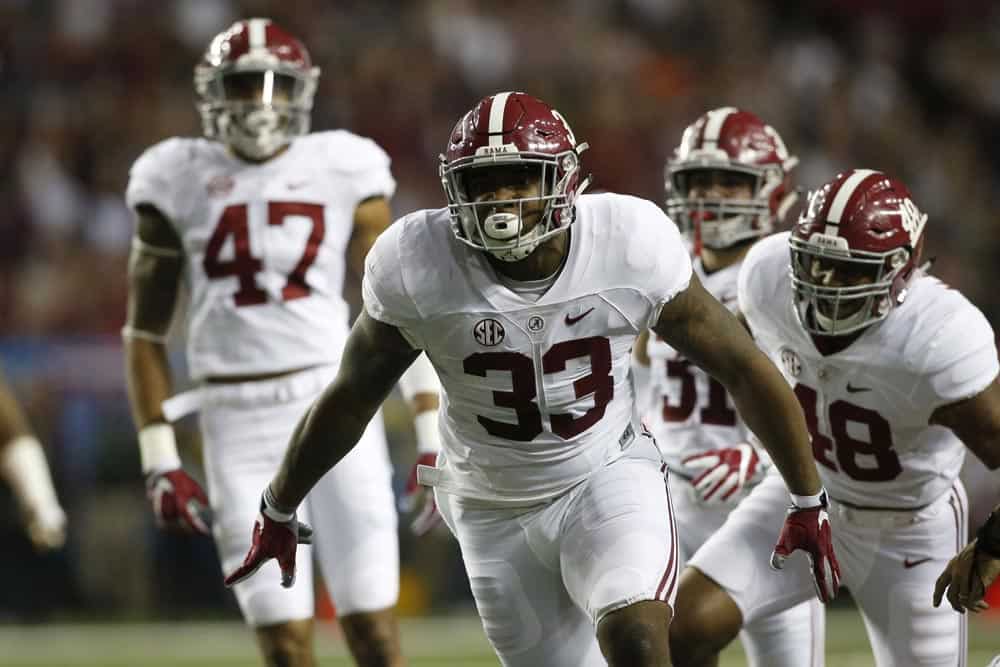 There are four college football bowl games slated for New Year’s Eve 2016, and two of the games are the College Football Playoff semifinals.

This is the third season of the “New Year’s Six” bowl games, which includes the two semifinal games and the four top-tier bowls. All of these games will be played on New Year’s Eve and January 2, 2017 this season.

The New Year’s Eve bowl schedule kicks off at 11:00am ET at Camping World Stadium in Orlando with the Buffalo Wild Wings Citrus Bowl. It features the LSU Tigers vs. the Louisville Cardinals.

Also at 11:00am ET is the TaxSlayer Bowl in Jacksonville, Florida, where Georgia Tech will take on Kentucky.

The first College Football Playoff semifinal is slated for 3:00pm ET at the Chick-fil-A Peach Bowl, where No. 1 Alabama faces No. 4 Washington. The final game of the evening is also a playoff and it features No. 2 Clemson vs. No. 3 Ohio State in the PlayStation Fiesta Bowl.

Good Job “Bama”
Love This Team For Years On Years
Hate To Miss A Game
Keep Doing It To It !!!

I would call that the most dominate or best league if I did not know the definitions of “best” or “dominant”.

The SEC has won eight national titles in the last ten years.

They’ll play for another next week that could make it nine the last eleven.

In fact, if you go back to 2003, when LSU beat Oklahoma, LSU, Florida, and Alabama have individually won more national titles than any other conference combined.

Alabama has won more national titles in that time than ALL of the Power 5 conferences, minus the SEC…

But yeah, the SEC is hardly dominating the sport. Unless you count national championships… and most people do… and then it’s not even close.

This idea of using one year or a couple of weeks as evidence that the SEC has not dominated the sport is absurd.

I would argue that you haven’t got a clue what the words ‘best’ and ‘dominant’ mean at all.

Who is Ohio State?

Come on Bama – give us a break and let us win this year. We will give it back to you next year. Clemson Tiger Fan

If it wasn’t for that on side kick last year, Clemson probably would of had it.

The last two years the Big Ten is 0-2 and lost by a combined score of 69-0 in the College Football Playoff… Can we stop inviting them and just take two teams from the SEC instead? Seriously. This is ridiculous.

Ohio State got embarrassed. As did Michigan State last year. I can’t defend either team for their performance because both were pathetic. But why would you take another team from the SEC? The SEC was bad in the regular season and not much better in the bowl season. If not for Alabama, the SEC would be the 4th, maybe 5th best conference this year. Regardless of how the title game ends, the ACC will clearly come out as the top conference.

Because the SEC is consistently better than the Big Ten. Every. Single. Year.

They weren’t better this year. The SEC had the best team (or at least top 2), sure, but who else was in the conference? I’m not getting into a long argument because at the end of the day I care more about my team than my conference and currently my team (Ohio State) has its tail between its legs (after playing an ACC team, a conference that beat up on the SEC as well) but I don’t know how the SEC having a 5-6 bowl record all of a sudden grants them any bragging rights.

Um… the SEC is still alive and the Big Ten isn’t.

Again… the SEC was better.