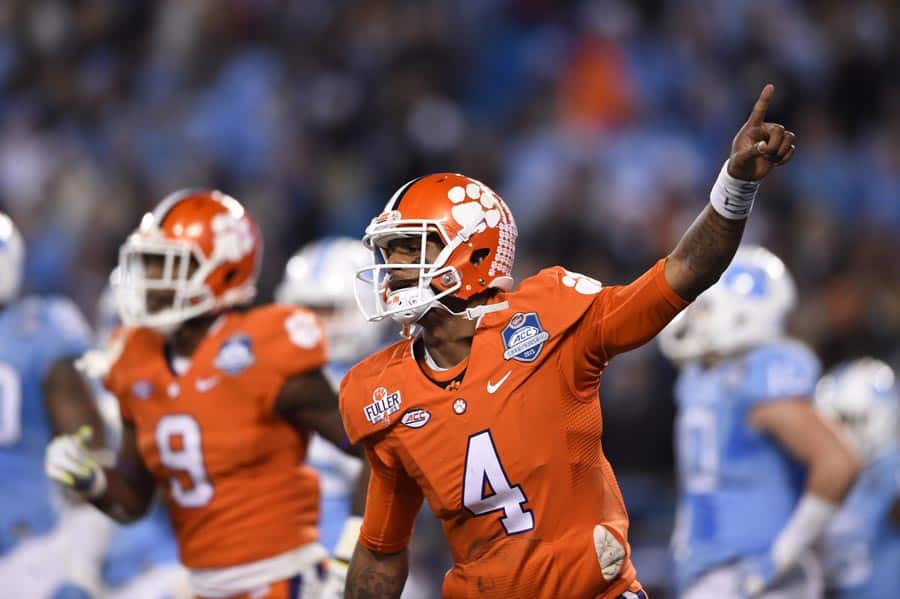 There are three college football bowl games slated for New Year’s Eve 2015, and two of the games are the College Football Playoff semifinals.

This is the second season of the “New Year’s Six” bowl games, which includes the two semifinal games and the four top-tier bowls. All of these games will be played on New Year’s Eve and New Year’s Day this season.

The New Year’s Eve bowl schedule kicks off at Noon ET at the Georgia Dome in Atlanta with the Chick-fil-A Peach Bowl. It features the Houston Cougars taking on the Florida State Seminoles.

Next up is the Capital One Orange Bowl, where No. 1 Clemson faces No. 4 Oklahoma in the first of two playoff games. The final game of the evening is also a playoff and it features No. 2 Alabama vs. No. 3 Michigan State in the Goodyear Cotton Bowl.

Best game of the day at 8 on New Years Eve. How stupid!

Most people work until 5pm!

Two biggest games of the year on New Year’s Eve …really? How about New Year’s Day when nothing is going on? Nothing like trying to get out for a New Years Party and watch football…what are you thinking!?

It’s because the Rose and Sugar Bowls fought to keep their New Years Day time slots. Since they won’t be hosting every year, this is what happened. I don’t see it as a big deal, I just get out of the office early!

They scheduled these games backwards for being on New year’s eve. The playoff teams should be first at 1200 and 4. What a bummer!!!

Very stupid. Maybe if the viewership is low enough the network(s) will get the message about scheduling.

Used to be able to watch these games now without ESPN, I can’t. Bring back free TV

Cool, early day for most kick back start long weekend with some great football thanks ESPN

I love the schedule. Looking forward to a great evening of football. Go Clemson, Go State!

ESPN SUCKS, ONLY ONE BOWL GAME THATS NOT ON PAY TV , ESPN HAS A LOCK ON ALL OF THEM. WHICH IS SAD ,THEY NOT ONLY CHARGE THE PEOPLE TO WATCH , THEY CHARGE EVERY COMPANY THAT ADVERTIZES WITH THEM. SO IN REALITY . PEOPLE ARE PAYING FOR COMMERCIAL TV ,…..#BUMMER

Screw ESPN Gary.They have a lock on college football games it seems. I have to pay for a higher tier with my cable company (around $50 more per month).in order to see anything on ESPN. It’s hard to stay interested in college football when it’s turning into a “pay per view” scenario. They’ve even latched on to the Monday night pro games.

If Rose isn’t a semifinal game

If Rose is a semifinal

Unless you don’t work, or don’t go out New Years Eve, or you are non-sociable at parties, OR the party is actually a football viewing affair, most people will miss out on some great football.

I agree with Chandler, this is terrible scheduling. If these games are so important, why aren’t they being played on New Year’s Day, or Saturday? Barbara

I work a full time job our plant is shutdown. I have kids and want to enjoy it at home so that’s your point of view thanks for speaking for everyone…idiot

I don’t get ESPN on my channels, nor do I want to purchase an additional bundle fee just to watch a few games. As someone else said, if you pay to view, you still have all the commercials. Not happy that regular networks don’t cover theses games.

Buck up and pay. Nothing in this world is free. Work 2 extra hours a month if you need to afford the coverage. This is the new reality.

Completely agree with Pete. Bowl games should be “for the people”, not just the cable zombies that support the corporados. I’m happy to pay for professional sports, or pay per game…but surrendering 2 hours a month and signing a 12 month contract – not a chance.

To buck up nothing is free reality Dave. I am a veteran football watcher, retired living on a fixed income, too old to be hired let alone work two hours a month extra to afford sports channels, the spirit is willing the flesh is not, I don’t have the internet my friend is typing this for me. Enjoy your football channels. When you get too old to work, my New Yeats wish for you is to be able to afford the sports channels. So many seniors can’t afford necessites let alone extras.

Dang this makes me sad to read this! Hey if u let me I will pay for your providers sports bundle for a year! Reply with ur email address and I will take care of it for you?

I agree 100% M.E. I’m in the same boat as you are. Pushing 80 and totally fed up with cable TV. I can only afford the basic cable which eliminates ESPN entirely. I live in a dead zone so TV antennas are NG . . .we have basic which consists of the main networks primarily, a few Spanish language stations and a load of channels selling crap. Damn, there’s 2 Shark vacuum stations and even a bra channel.among this junk.

Just sucks i cant watch necause their all on canle and i dont have it. But go sooners

As a non-cable subscriber, I cannot watch anything on ESPN(x). Playoffs should be required to be on open broadcast networks or offered via free live streaming. A pox on the NCAA for stooping to this money-grubbing ploy.

Sorry, Bub but this is America! The land of the free, the home of the brave and a society devoted to capitalism!

I thought the anti-trust laws did away with LEGAL MONOPOLIES…………. It looks like they missed one ! No espn, no college football. I want my FREE TV !!!