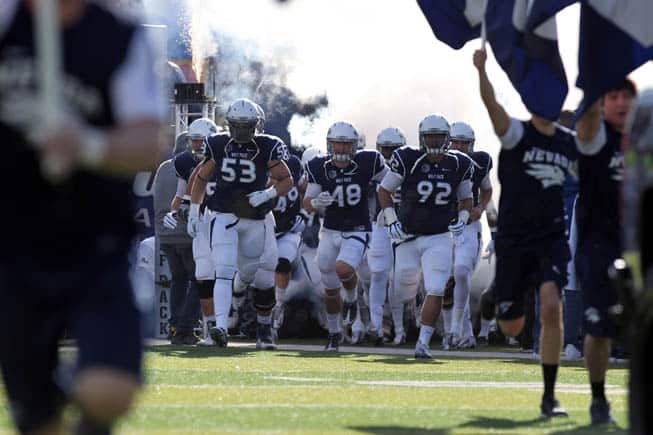 The Nevada Wolf Pack have never played a team from the SEC, but that will change next season.

Today it was announced that Nevada will travel to face the Texas A&M Aggies at Kyle Field in College Station on Sept. 19, 2015. The Wolf Pack will reportedly receive a $1.5 million guarantee.

Nevada and Texas A&M have met one time previously, however. The two schools played in San Antonio way back in 1950 when the Aggies were a member of the Southwest Conference and the Wolf Pack were a Division II Independent.

Nevada has also added a home-and-home series against the Buffalo Bulls of the Mid-American Conference. Nevada will travel to Buffalo on Sept. 26, 2015 and will host the Bulls in Reno on Sept. 17, 2016.

Along with the additions came a few cancellations. Nevada was scheduled to face UCLA in a home-and-home series in 2015 and 2016, but that will no longer happen. Also, Nevada’s trip to face BYU in Provo in 2019 has been axed.

The final scheduling move announced by Nevada today is that their 2015 game at Idaho has been postponed to either the 2020 or 2021 season.

With today’s announcement, Nevada has completed their non-conference football schedules through the 2017 season. The Wolf Pack need only one more game for 2018 and two in 2019.

Buffalo also announced this series with Nevada as well as a home-and-home with Florida Atlantic. September 19, 2015 in Boca Raton. September 23, 2017 in Amherst.