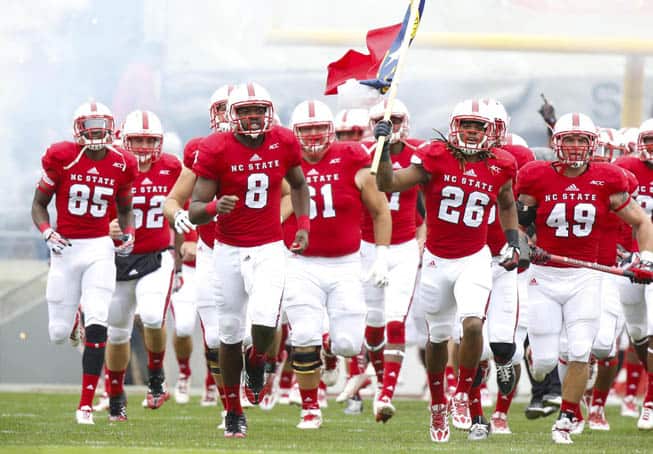 The NC State Wolfpack and the Troy Trojans have scheduled a home-and-home football series for the 2015 and 2017 seasons, Troy Athletics Director John Hartwell announced Monday.

NC State will host the first game of the series at Carter-Finley Stadium in Raleigh on Sept. 5, 2015. The game will be the season-opener and first ever meeting between the two schools.

The second and final game of the series will be played on Sept. 23, 2017 at Veterans Memorial Stadium in Troy, Alabama.

“Anytime we can get an AQ opponent to come to Troy, and to do so in a home-and-home series, it’s a tremendous get for us,” Hartwell said. “It will be an opportunity to showcase not just our football program, but also our facilities, our University and the city of Troy. We’re not scheduling to just say that we played them; it’s one that we think we have a legitimate shot of not only competing, but also winning one or both of those games.

“This also makes it easier for future scheduling as we can tell other schools that Mississippi State, Navy, Duke, NC State and Boise State have all been in here in a seven-year window.”

NC State was previously scheduled to open the 2015 season at South Alabama on Sept. 5. A new date for that game will be announced soon, per the USA athletics department.

With the Wolfpack now visiting Troy in 2017, it’s more and more likely that they will not travel to face LSU that season as has been rumored for some time.

Other games in 2015 for NC State include a trip to Old Dominion on Sept. 19 and the aforementioned trip to South Alabama, which could be moved to another season.

Troy has now completed their non-conference schedule for the 2015 season and has three games set in 2017. In 2015, the Trojans also visit Wisconsin and Mississippi State and host UAB. In 2017, Troy visits Boise State and LSU.

What happened to the Wolfpack program? NC State non-conference schedule is at the bottom of all Power 5 conference programs. Trading a visit to South Alabama for a visit to Troy is not a clear trade up.

Penn St, Arizona, Missouri, Missi St, and Vanderbilt are still in need of a power five match-up for the 2015 season. UConn as well. Both ULL and Charlotte could use big pay day 2015 games.

I think Debbie Yao has lost it. So N.C. St. plays South Ala. and Troy in 20q15. I suppose the Troy game replaces LSU in 2017. This stinks and I for one will not be buying season tickets with this kind of schedule. I’ve had with the price of tickets and the quality of opponents being brought to Carter Finley Stadium.

NC State will probably lose both of these games, and then whine about how unfair it was, because Troy had nothing to lose in this series.

Buying out of games really doesn’t do anything if you replace teams like C. Mich. with a game against Troy St. in southern Ala. in early Sept. where it is 90 degrees and 100% humidity. Our scheduling just doesn’t make sense. What is our fasination with playing teams from the Sun Belt Conference????

Is there any chance that NC State could get Elon or Wagner or UT Martin? They would really draw well with their great football traditions.