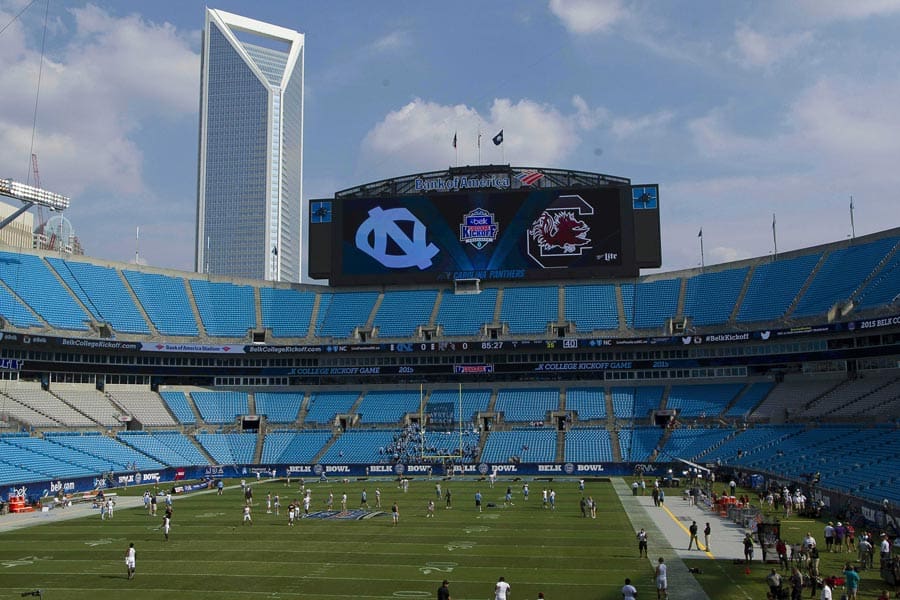 The NC State Wolfpack and the South Carolina Gamecocks will open the 2017 season in Charlotte in the Belk College Kickoff Game, the Charlotte Sports Foundation announced today.

The game will be played in September 2017 at Bank of America Stadium in Charlotte, North Carolina.

“We are excited to announce that these two prominent universities will be facing off in Charlotte in 2017,” said Will Webb, Executive Director of the Charlotte Sports Foundation. “It is a great time to be a college football fan in Charlotte, and we look forward to welcoming Gamecock and Wolfpack fans to our city.”

NC State and South Carolina have met 57 times on the gridiron and the Gamecocks lead the series 27-26-4. In their last meeting in 2009, South Carolina won 7-3 in Raleigh.

“We have been in discussions with South Carolina for a couple of years and were able this past August to find a mutually acceptable season to play,” said NC State Director of Athletics Debbie Yow. “Wolfpackers will look forward with great anticipation to this ACC-SEC matchup.”

NC State was previously scheduled to open the 2017 season at home vs. Furman. They have pushed that game back two weeks to Sept. 16. The Wolfpack also host Marshall on Sept. 9 and travel to Notre Dame on Oct. 28.

This neutral site game should draw in fans easily being in Charlotte.

Good, this allows Troy to have UAB visit in 2017, when the UAB program resumes.

NC State’s schedule in 2017 is worlds better than this year.

Attendance was at that level due to outrageous ticket prices, not fan interest.

this is it this our seasons

perfect solutions with this one