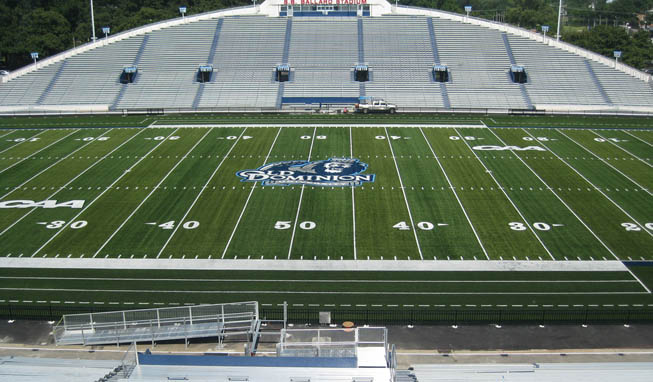 The NC State Wolfpack and the Old Dominion Monarchs have scheduled a 2014-15 home-and-home football series, The Virginian-Pilot has reported.

NC State will host Old Dominion at Carter-Finley Stadium in Raleigh in 2014, and will then travel to face the Monarchs at Foreman Field at S. B. Ballard Stadium in Norfolk in 2015.

“This is the first of what I believe will be many BCS schools that will agree to play Old Dominion home-and-home,” head coach Bobby Wilder said.

“People on a national stage realize how good the high school football is here in Hampton Roads. They want to come into this market. That’s why I believe more BCS schools will want to come play Old Dominion.”

Old Dominion will be classified as an FCS Independent for the 2013 season. They are moving up to the FBS in 2014 and will play a full Conference USA schedule.

NC State has tentatively completed their 2014 non-conference slate with the addition of ODU. The Wolfpack open the season at Central Michigan (Aug. 28), play at USF (Sept. 13), and also host Presbyterian.

In 2015, the only other game currently schedule for NC State is a season-opener at South Alabama on Sept. 5.

Good for ODU, I’m a FSU fan and live in Norfolk and support ODU in several sport’s. Ill be there pulling for the Monarchs!

Why would N.C. St. schedule a Home & Home with Old Dominon??? It just doesn’t make sense.

a win and recruiting in Virginia

And empty seats in Carter-Finley!

and that is something new? We are not talking about Va. Tech or Clemson.

Hampton Roads area is an important recruiting area for all ACC schools. Playing in Norfolk will help the appeal of the Wolfpack there.

Home game attendance is less about the quality of the opponent and more about the loyalty of fans.

NCSU will bring a lot of fans. Raleigh is only a 3 hour drive. Even though Greenville, NC and Washington, NC is ECU country; there are some NCSU fans there who are closer to ODU than they are to NCSU.

State travels well and always sells out carter Finley. Fan base isn’t an issue. Recruiting is key, but I’d like to see some more games played in SEC territory however maybe not SEC schools.

NC State’s 2014 non-conference schedule has to be the WORST in the country,