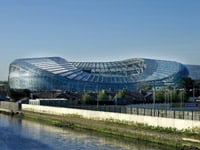 The Naval Academy has announced that their 2012 football game against Notre Dame will be played at Aviva Stadium in Dublin, Ireland on September 1.

Aviva Stadium opened in May and seats 51,700. The stadium is home to the Irish rugby union team and the Republic of Ireland national football team.

The Notre Dame Fighting Irish lead the overall series against the Navy Midshipmen 71-11-1. Their 2010 contest will be played on October 23 at Meadowlands Stadium in East Rutherford, New Jersey.

What party for the Irish – no non-Irish allowed!!!!

I’ll see you there!

when do these tickets go on sale? Do definately want to go….go Irish!

Notre Dame is usually better than Navy, so it probably won’t be too exciting. However, the chance for foreigners to watch American football would be fun.