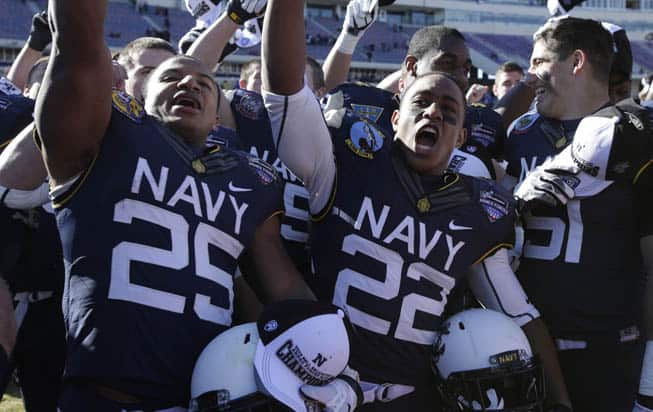 The Navy Midshipmen have posted their 2017 non-conference football schedule to their official website. The schedule includes games against Air Force, Army, FAU, and Notre Dame.

The Midshipmen then begin their quest for another Commander in Chief’s Trophy when they host Air Force at Navy-Marine Corps. Memorial Stadium in Annapolis on Sept. 30. Navy trails in the overall series 19-27 but has won two straight over the Falcons.

Navy’s final 2017 non-conference game will be the 118th edition of the Army-Navy game. The annual rivalry game will be played at Lincoln Financial Field in Philadelphia, PA on Dec. 9.

The Midshipmen have dominated the Black Knights of late, winning 12 consecutive match-ups to extend their lead in the series to 58-49-7.

Navy, which is set to join The American in 2015, has set this season’s Blue & Gold Spring Game for Friday, April 11 at 7pm ET. The Middies kick off the 2014 season on Saturday, Aug. 30 vs. Ohio State at M&T Bank Stadium in Baltimore, MD.