National Signing Day: How one day in February fields the CFB Playoff bracket 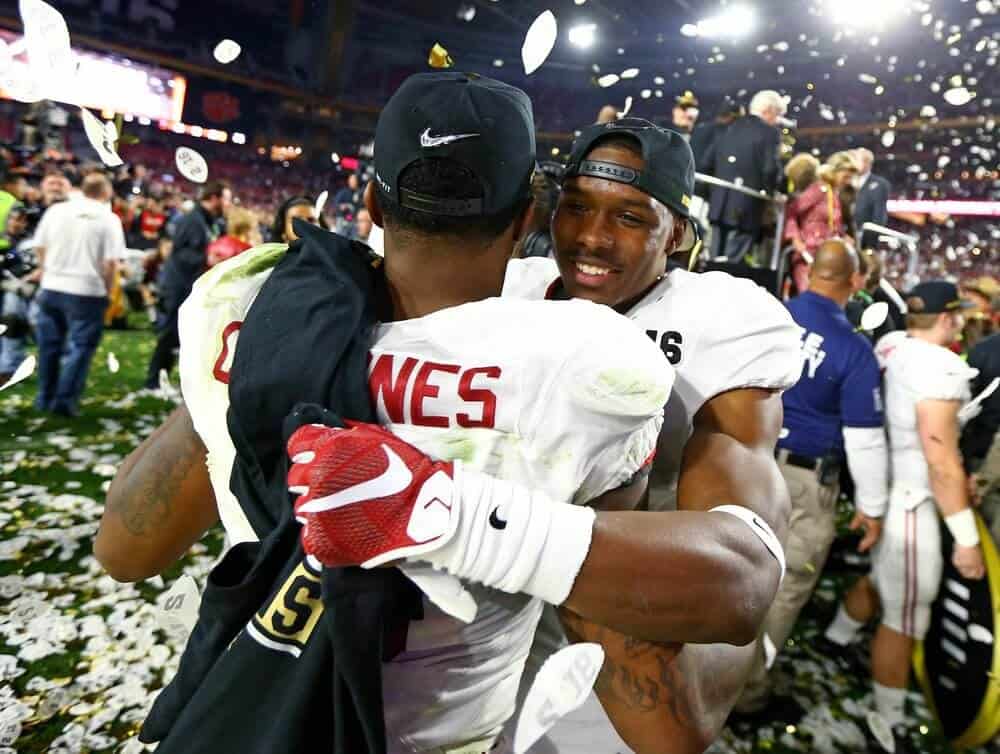 Feb. 1, 2017 is the day that will ultimately decide which teams play for a national championship over the next five seasons.

The common link connecting the only three teams to have ever won a national title under the CFB Playoff regime is a top-ten average in team recruiting rankings (as per Rivals.com) over the five national signing days leading up to the championship. Take a look.

The only other school that’s ever won a CFB Playoff game is Oregon, who destroyed Florida State 59-20 in the first-ever bracket in 2014. The Ducks average rank from 2010-14 was 16.6 – out of the top ten but well within the top twenty.

Next, check out the four schools who are 0-1 in CFB Playoff action.

The message is clear – a program can make the Playoff with subpar recruiting ranks, but they won’t make it to/win the title game. Or, such a team hasn’t pulled that off yet.

Next, let’s look at each of the playoff seasons and identify those schools with a five-year top-ten average in team recruiting that didn’t make the bracket.

LSU – 7.6 average – finished 8-5, tied for fourth place in the SEC West. Lost to Notre Dame in the Music City. Unranked in the final AP.

Auburn – 8.4 average – finished 7-6, last place in the SEC West. Beat Memphis in the Birmingham. Unranked in the final AP.

Georgia – 8.4 average – finished 10-3, tied for second in the SEC East. Beat Penn State in the TaxSlayer. Unranked in the final AP.

Georgia – 9.6 average – finished 8-5, tied for second in the SEC East. Beat TCU in the Liberty. Unranked in the final AP.

Seeing the same school names repeatedly brings up several points. First, an aristocracy exists in major college football. It’s an elite group that takes many years and lots of cash to break into. Next, the teams highlighted underachieved in the years in which they are listed.

It also highlights how difficult it is to win the SEC West – regardless of how many elite athletes you recruit, the deck is stacked against you like no other division in college football.

Finally, it goes a long way in explaining the coaching changes at Florida, USC, Texas, Georgia and LSU. It also ramps up the pressure on Gus Malzahn at Auburn.

Looking ahead, listed below are the ten teams with a top ten team recruiting average from 2013-17. Also included is their rank in ESPN’s Way Too Early Top 25. As of now, these are our national championship contenders.

Notably, the new additions to this otherwise static list are Texas A&M and Notre Dame. After dropping to No. 17 in team rankings in 2016, the Aggies are back in the top ten with its 2017 class – enough to push its average into the elite ranks. For the Irish, they’ve earned top 15 mention since 2014 and still have the benefit of a No. 3 rank in 2013.

For A&M, the path to an actual national championship will be made considerably more difficult, due to its membership in the SEC West – home to 40 percent of the teams on the elite list. What this means for Kevin Sumlin’s job security is unknown.

To finish, following a list of schools that are in ESPN’s rankings, but who don’t have the recruiting numbers to suggest a legitimate national title threat in 2017.

Team recruiting rankings courtesy of Rivals.com. 2017 rankings, which are still changing until National Signing Day finishes, were sourced on Jan. 31, 2017.

Maybe it’s just me but ESPN.com had this same story TODAY. Didn’t read to check attribution