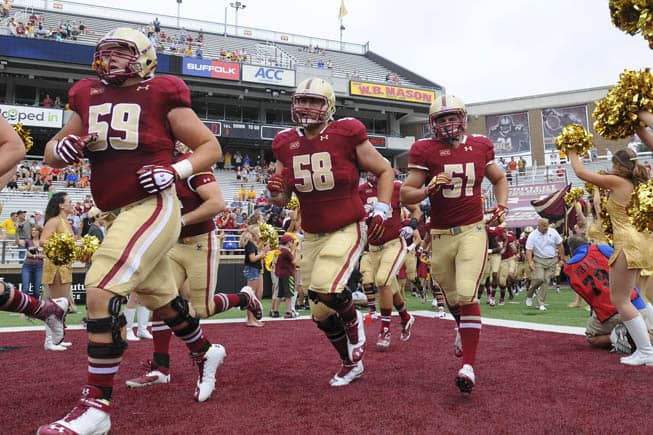 With the ACC and SEC requiring members to play at least one power-five opponent in non-conference play each year, you’ve got to figure that some phones will be ringing more often than others.

Yes, for every one call to Alabama for a future meeting there should be at least six calls to Kentucky. In both cases, the caller will have fulfilled their obligation by playing an SEC team.

Since all schedules are not created equally, here are the top seven programs teams should target for their power five non-league requirement. None of them are above .500 in non-conference play since 2011.

These teams’ phones should be ringing off the hook.

Purdue’s last win over a power-five team in non-league play came seven years ago, in 2007, when it beat Notre Dame 33-19.

The Buffs’ most recent victory over a non-conference power-five foe came in 2010, it was still in the Big 12 then, when it beat Georgia 29-27.

The Demon Deacons’ most recent win over a power-five team out of the ACC was in 2010 when it beat Vanderbilt 34-13.

Boston College—like Wake Forest—is 5-8 in non-conference action since 2011 but improved to a 3-2 record last season.

The Eagles’ last non-ACC win came via a 48-34 victory over New Mexico State in 2013, but they haven’t beaten a team from a power five league since beating Michigan State 24-21 in the 2007 Champs Sports Bowl.

Umm, I don’t get this. Do we know how strength of schedule is going to be handled going forward? Is the comitee really going to say “wow Mississippi State beat 2-10 Colorado and 4-8 Indiana! If they make it to the SEC title game they are definitely in the 4 team playoff!”

Just because going beating up on weak schedules in the past meant something does not mean that will be the way it is going forward.

Umm, If Mississippi State makes the SECCG it would require them to win the SEC western Division .Not gonna happen ,not gonna happen ,your scenario is so far fetched you need to change medication instead of taking the one you have been on.

Why schedule a team like BYU that might beat you, when you can beat up on Colorado, and then brag that you beat a Power 5 team?

Both Colorado under MacIntyre and Cal under Dykes will be really good soon. Schedule at your own risk, there are only a select few Power 5 auto-wins out there.

Someone would rather play Georgia Tech instead of say, Kansas? I doubt it. Tech’s a consistent bowl team and never finish below .500 in the ACC. They’re the item that doesn’t belong here.

The list is strictly based on their non-conference winning % lately. Georgia Tech’s record suffers from having lost to Georgia a lot. If this were an opinion-based article, Tech would certainly be lower or not on the list because many teams don’t want to face a triple-option offense and Paul Johnson’s blocking schemes.

I agree about Ga. Tech……..no one who doesn’t have to, doesn’t want to have to prep for then play a team that runs the triple.

The title of the article is misleading then. What is the point of writing the article if you are just going by non-conference winning % and have no critical thought?

Articles based on numbers are written all the time. Thanks for reading.

Great point on GA Tech Kevin, If you have one guy on your D that can’t play assignment sound. You don’t want Tech.

There were talks of Georgia Tech and South Carolina home-home series that kept getting pushed back because of the league expending scheduling conflicts. I wouldn’t mind seeing them play as a gamecocks fan. We’ve always struggle with the option. Navy give us fits a few years ago.

Yep….Ga. Tech. And Paul Johnson’s joke of an offense are definitely on a downward spiral.

I think when Cal beat Colorado in 2011 that was technically a non-conference game even though both were in the Pac-12 since it had been scheduled before conference realignment.

Correct. The game did not count towards conference records for either team.

Bwburke94 That was when Cal had some pretty good teams. And some really solid running backs. Thats why they won games like they did. They don’t have that now a days.

The term “Power 5” is kind of premature, isn’t it?? Couldn’t we allow the AAC to be around for a few years before we determine them to be a notch below?? They have won their only BCS game thus far

They’re currently 2-2 in the post season or 1-1 if you exclude Rutgers and Louisville since they’re no longer a part of the conference, and the AAC champions (UCF) did beat the BIG12 champions (Baylor) 52-42. So I agree with you Matt, it does appear to be premature but if anything the term could change to “Power 6”. We just have to wait and see what the American does going forward between win/loss ratio, who they add, and/or who they lose, plus the talent that will go to the AAC in terms of recruiting, as well as, the development of their athletes.

I think they should be in the mix. We could really included them in the mix if they were to mix a few teams around and not lose Louisville.

I see your point, however, things change and the BE (as far as football is concerned) is no more. We are talking about things moving forward and I believe the AAC has a lot of potential, no one is saying the AAC is a power conference but it shouldn’t just be overlooked. Don’t underestimate this conference for it might just surprise you. Basketball wise it does look very promising and with UConn leading the way other conferences need to watch out.

By the way I made a typo earlier it should say 2-3 and 1-2 for the AAC post season record.

AAC aka “The American”, last year won men’s and women’s basketball National Championships, and won a BCS Bowel game vs. Big 12 Champion Baylor. Last year was the 1st year the AAC renamed itself after selling the Big East name to the Catholic 7 for 120 million dollars. The two National Championship winners last year (UConn men and women) are permanent members as is last years BCS Bowel winner UCF, and of course one of the best programs (Cincinnati Bearcats) over last 10 years in all of college athletics is a permenent member of AAC

B.C. & UConn would be a really good blockbuster for the New England fans. It’s comparable to Yale & Harvard, but on a completely higher level.