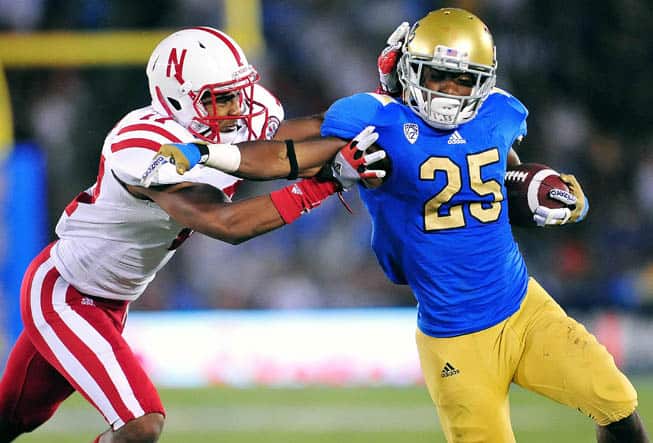 Nebraska-UCLA is one of two Top 25 matchups this week. (Gary A. Vasquez-USA TODAY Sports)

Week two of the college football season gave us two more astounding upsets. Texas went into Provo to take on a BYU Cougars team that had lost to Virginia the week before. Unbelievably, the Longhorns gave up 550 yards of rushing, including 259 to starting QB Taysom Hill. It’s hard to imagine a more devastating upset.

Unless you’re Lane Kiffin and USC. The Trojans suffered one of the more embarrassing upsets in school history in its 10-7 home loss to Washington State. USC quarterbacks were a combined 11 of 21 for just 54 yards. Max Wittek ended the game with a QBR of 0.7.

These two games are what make week 3 so exciting. It’s becoming more and more difficult to gauge where the huge upsets will come from. Maybe one of them will come from the most anticipated college football games of week 3.

The Bruins face their first real challenge of the season when they travel to Lincoln to take on the Cornhuskers. UCLA made quick work of Nevada in its opener while Nebraska struggled to put away Wyoming in week one before demolishing hapless Southern Mississippi a week ago.

Taylor Martinez has been efficient at quarterback thus far while leading an offense that’s 8th in the nation in rushing. Jim Mora’s defense must concentrate on stopping the run first and force Martinez into 3rd and long situations or else it could be a long flight home to L.A.

The latest “Game of the Century” kicks off in College Station in a battle most college football fans circled on their calendars at the beginning of summer.

There’s a good chance you fall into one of two Johnny Manziel camps: You find him to be a Joe Namath-like rebel (sans Twitter) and want to watch him stick it to a Crimson Tide squad that has won three of the last four national titles. Or you’ve grown tired of his schtick, know for certain he got paid this summer for signing memorabilia, and you can’t wait to see him sitting on the bench for a Canadian Football team next year.

No matter what side of the fence you reside on, Texas A&M versus Alabama is THE reason to fire up the grill, get some cold ones on ice, and invite your friends over. Just remember this little gem of a stat: At both LSU and Alabama, Nick Saban is 15-2 in revenge games. That’s quite the amazing record when Saban squares off against teams that beat him the previous meeting.

Oregon returns home after sprinting past Virginia last week 59-10 in Charlottesville. Although it’s only been two games against inferior opponents, it’s still mind-boggling to see the Ducks averaging 425 rushing yards per game (second in the nation) and averaging 62.5 points per game, which is somehow still only good enough for second in the country behind Baylor.

Tennessee was handed an absolute gift last week when Western Kentucky turned the ball over on back-to-back-to-back-to-back-to-back possessions. Yes, that’s 5 straight turnovers – in a 6-play span – and still the Hilltoppers were within striking distance early in the 3rd quarter. The Vols shouldn’t expect the Ducks to be so generous and butterfingered. If they can’t control the ball on offense and get some early points, this one could get out of control quick.

Our Under the Radar matchup of the week pits one of the more underrated in-state rivalry games. Last year, Iowa State pulled the upset on the road in Iowa City after also defeating the Hawkeyes in 2011 in overtime.

For the Cyclones, this game is especially important after their week 1 meltdown at home to Northern Iowa. Their defense must do a better job against the run after giving up 199 yards to the Panthers’ David Johnson.

Like their in-state rival, the Hawkeyes also suffered a rough week 1 home loss when Northern Illinois snuck out of Kinnick Stadium with a last-second field goal. After a sluggish win last week versus Missouri State, starting QB Jake Rudock needs to protect the ball better after throwing 3 interceptions in the first two games.

No matter what coast you live on, it’s always great to go deep into the night with a solid out-of-conference matchup. #20 Wisconsin travels to Tempe to take on an Arizona State squad that should probably be ranked (certainly considering that conference foe USC began the season in the top 25 before suffering that horrific loss at home to Washington State).

That was the sixth game on my list and I simply ran out of room in the article. :]

Ole Miss at texas will also be a very interesting game.

If the Longhorns lose tomorrow, I could easily see Mack Brown being fired. Especially if Mississippi blows them out.

good list, the Arizona State game with Wisconsin should be great. Washington vs Illinois could be interesting too!

If Johnny Manziel being paid for signing autographs was the worst thing in college football,
we’d have no problems in what is probably the most corrupt and phony “amateur” sport on the planet. 95% of those guys on the field have as much business being in college as my old shoe,