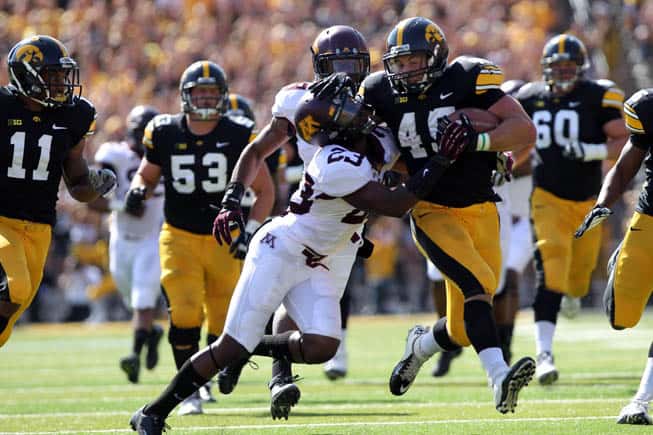 Iowa at Minnesota is this week's Under the Radar game. (Reese Strickland-USA TODAY Sports)

To paraphrase the great college football writer Ivan Maisel over at ESPN, the only good thing about week 4 is that it’s now mercifully over. Ohio State, Louisville and Miami all won their games by 70 points or more over ridiculously overmatched FCS squads. The only game between two top 25 programs (Arizona State at Stanford) didn’t even get interesting until late and still resulted in a two-touchdown victory for the Cardinal.

Now that those FBS vs. FCS scrimmages are over, the majority of schools are digging into conference play. With so many great matchups on the docket this week, let’s take a peak at the most anticipated college football games of week 5.

Thursday night football on ESPN gives us a solid matchup in the Coastal Division of the ACC. Virginia Tech and Georgia Tech are probably the only teams that can give Miami a real challenge to see who plays in the ACC Championship game. The Yellow Jackets are currently 2-0 in conference play having rallied last week versus North Carolina. If they can take down the Hokies at home, they’ll have two extra days of rest before a massive showdown Oct. 5 at Miami.

It doesn’t get much better than a top 10 matchup between SEC powers. This game is especially important for the Bulldogs as two losses could very well bury their national title hopes. Come through with a victory over an LSU offense vastly improved from last year and Georgia could find themselves inching toward a top 5 ranking. However, if Zack Mettenberger continues his hot hand (10 touchdowns to just 1 interception) the Tigers will surely secure a 5-0 start and a top 5 ranking.

Notre Dame has been spectacularly unimpressive thus far in 2013. After a late rally to knock off Purdue two weeks ago, the Irish slogged through a 4-point win over a Michigan State squad that – thankfully for the Notre Dame defense – ranks 111th in passing yards.

#14 Oklahoma comes to South Bend with an uncharacteristically weak passing game. The defense has been stellar thus far, however, giving up only 9 points per game. This contest has the feel of a game decided by which field goal kicker can keep his composure under pressure.

Remember during the summer when FBSchedules ran articles ranking the top games of the season? Pretty sure we didn’t have Iowa at Minnesota.

This week’s Under the Radar game will probably get lost in the shuffle of the 3:30 p.m. ET time slot when it goes up against LSU/Georgia and Oklahoma/Notre Dame. This game is especially huge for the Gophers who could find themselves at 5-0 next week when they visit undefeated Michigan. Considering how the Wolverines have looked the past few weeks versus Akron and UConn, the Legends Division of the Big 10 is more wide open than we may have thought.

Once the Crimson Tide survived the circus act that is Johnny Football in week 3, there appeared to be only a few games on the schedule that could really give them trouble. Nov. 9 versus LSU is one; this Saturday versus #21 Ole Miss is the other.

Alabama looked uninterested and bored in last week’s snoozer against Colorado State. If Nick Saban’s history has told us anything it’s that his players won’t fall asleep two weeks in a row. One major point of concern is a defense that’s ranked 36th overall in points allowed. Ole Miss is averaging 250 yards rushing per game. Could this game surprise us just as much as Texas A&M’s shocker in Tuscaloosa last year?

Other than the California Golden Bears, every team in the Pac-12 has a winning record. In fact, Arizona and Washington currently represent 2 of the 6 undefeated teams in the conference. One of them will go home with a loss Saturday night when the Wildcats travel north to take on the Huskies and their frenzied fans.

ABC’s primetime game is a good one. #23 Wisconsin rebounded nicely last week versus Purdue after that wild ending in Tempe two weeks ago. Ohio State wrote Florida A&M a huge check before tallying up 76 points in a game no fan should have had to pay money to see in person.

It’s hard to believe this game won’t decide the Leaders Division of the Big 10. With Penn State still on probation – and the trifecta of Illinois/Purdue/Indiana currently posing no real threat – Saturday night’s showdown will probably determine who plays in the Big 10 Championship this December.

Currently, Ohio State plans to play both Braxton Miller and Kenny Guiton at quarterback. It should make for an intriguing storyline as the game progresses to see if Urban Meyer sticks with his preseason Heisman candidate or the replacement that has already tossed 13 touchdowns.

Great selection of the best games. I am also looking forward to these games, even though nationally they may not be considered great matchups: USC at Arizona State, Miami at South Florida, Stanford at Washington State and Pittsburgh at Virginia. But I am a huge fan of Miami and Arizona State.

Bill: I’m super intrigued by the Stanford game as well. Has Wazzou progressed to the point where they can beat USC AND Stanford in the same season? Seems hard to believe but we’ll see.

Not only does the Iowa-Minnesota game match each school against its greatest traditional rival, there is more than just pride at stake. The winner of this game takes home Floyd of Rosedale, the famous bronze pig trophy that came about as a result of the hard fought games in 1934 and 1935. If you consider yourself a serious college football fan, take a few minutes to read up on the fascinating history of Floyd of Rosedale at Wikipedia. You won’t be disappointed. This is one of the four trophies that the Minnesota Gophers play for — the others being the Little Brown Jug (vs Michigan), Paul Bunyan’s Axe (vs Wisconsin) and the Governor’s Victory Bell (vs Penn State).