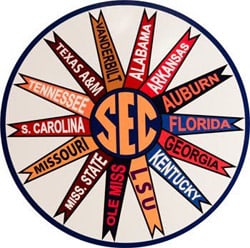 Today the Missouri Tigers and the Texas A&M Aggies have officially joined the SEC. The conference now has 14 members and has expanded for the first time since 1992.

Missouri will compete in the East Division along with Florida, Georgia, Kentucky, Missouri, South Carolina, Tennessee, and Vanderbilt. Their first game of the 2012 season is on September 1 at home against Southeastern Louisiana and their first SEC game is September 8 vs. Georgia.

Texas A&M will play in the West Division along with Alabama, Arkansas, Auburn, LSU, Mississippi State, and Ole Miss. The Aggies open vs. Louisiana Tech at Shreveport on August 30 and then kick off SEC play on September 8 at home against Florida.

The permanent cross-division game for Missouri will be Arkansas while Texas A&M’s opponent will be South Carolina.

welcome to the family
War Eagle

Thanks guys, you did the Big 12 a favor!

The bad feelings and sour grapes! The only ones Missouri and Texas A&M did favors for were themselves. They sought stability. Who knows what these Conferences are going to morph into in the decades ahead? What will happen to the Big 12 if someday Texas finally decides for sure that they belong on the West Coast? I think the SEC will eventually take Schools from North Carolina and Virginia to make 16. That 16 will be like the Rock of Gibraltar! Can the Big Whatever say the same?

September 22 in Columbia, SC – The inaugural edition of “The Battle of the Columbias” will be played between the Mizzou Tigers and the USC Gamecocks. Both the Universities of Missouri and South Carolina are located in Columbia. This should be a fun game.

Let’s not forget about the Tiger Series between Mizzou, LSU and Auburn.

Both Missouri and A&M will get their asses kicked in The SEC!!!!!