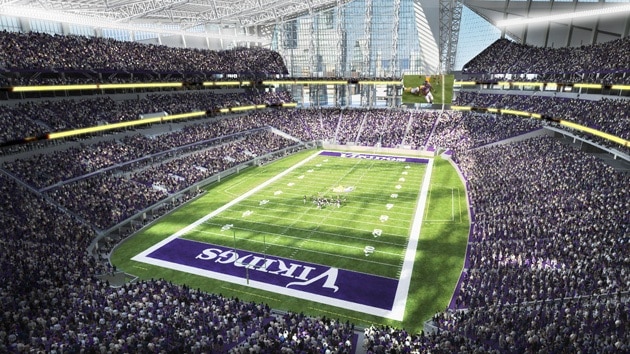 The game will be played at the new Minnesota Vikings stadium in Minneapolis. The stadium is currently under construction and is projected to open in 2016.

Minneapolis also hosted Super Bowl XXVI in 1992. The game between Washington and Buffalo was played at the Hubert H. Humphrey Metrodome.

The NFL likes to reward teams who build new stadiums with hosting a Super Bowl so I am pretty sure that Atlanta’s turn will come.

As a Vikings fan, I am very happy that Minnesota will host Super Bowl LII. It hasn’t fully sunk in yet but over the next four years it definitely will!

What about Seattle as host? It is the most gorgeous setting in football and warmer than New York City.

I can see the 12th man now surrounding the stadium screaming their lungs out when Seattle play in it’s 6th Super bowl in a row!!

You can say what you want about the new stadium craze, but I think Minnesota’s have been justified (both Target Field and the new Vikings dome). The Metrodome was a bust and it took the roof caving in to get a new stadium plan going. The new Vikings stadium looks a classy venue without being too exorbitant, while Target Field is a classic baseball venue. Sports fans in the Twin Cities have it pretty good right now.

I was fortunate to see both the Twins and the Vikings play at the old Metropolitan Stadium. I also saw both teams play in the dome. Hooray for Target Field but I’m sorry they put the Vikes in another enclosed venue because like Lambeau in Green Bay, outdoors in December in Minnesota was always a benefit. The Vikings haven’t won once since they moved to the Dome and I watched the last time they won the NFC Championship against the LA Rams at minus 16 degrees outdoors in 1976. Not all Minnesota fans are wusses like me. (I moved to the Sun Belt ten years ago.)