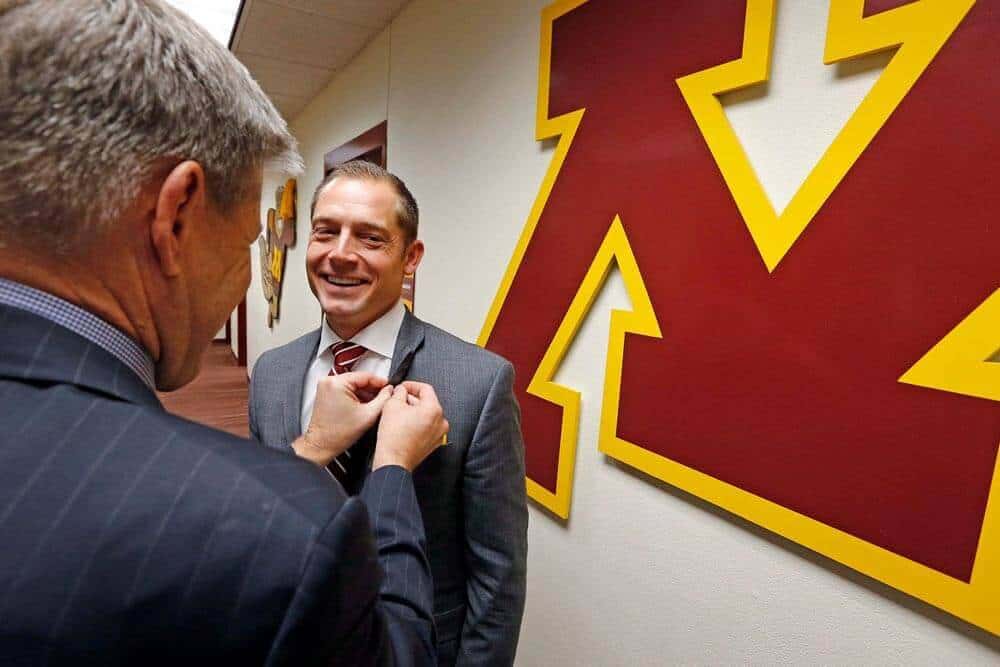 Head coach P.J. Fleck takes over the reins at Minnesota after leading Western Michigan to its first-ever double-digit win season and it’s first-ever mention in the AP Top 25. The Broncos finished 2016 at 13-1, ranked No. 15 in the final AP. They also captured their first MAC championship since 1988.

He assumes responsibility for a Golden Gopher program that hasn’t posted 13 wins since 1904 and hasn’t been ranked in the postseason Top 15 since 1962. The last time Minnesota won the Big Ten was in 1967.

Can Fleck realistically manufacture the kind of results he achieved in the MAC West in the Big Ten West?

How many FBS programs do you think have earned more recognized national championships than Minnesota?

Minnesota has one more title than both Miami (Fla.) and Nebraska, two more than LSU, Penn State, and Texas and three more than Auburn, Florida, and Florida State.

Equally stunning is how the Golden Gophers’ 18 all-time Big Ten titles stacks up – third in a conference jammed with storied programs.

The only two schools with more Big Ten hardware are Michigan (42) and Ohio State (35). Notables with fewer titles than Minnesota are Wisconsin (14) and Iowa (11). As far as Penn State (with four titles) and Nebraska (0), they joined the conference later – in 1993 and 2011 respectively.

It all adds credence to the argument that the achievements are nothing more than products of a bygone era that is, well and truly, gone. But, before poo pooing a resurgence of the once mighty gridiron Gopher, consider the case of programs like Michigan State and Ole Miss.

Both Michigan State and Ole Miss suffered through long, drawn out periods of darkness when past success seemed to mean nothing more than – you guessed – ancient history. The reality was, in both cases, that national championship contention was just around the corner.

All the Right Stuff

Despite the long lean years, P.J. Fleck is walking into an ideal situation at Minnesota. Though he’s not taking over at Oregon, LSU or Texas – he’s also not the new guy at Purdue or Indiana. Take a look at the facts.

The numbers don’t lie…Minnesota was moving in the right direction before the coaching change.

The Golden Gophers did well by landing in the West division of the Big Ten when the league was split into the East/West format in 2014. Though they still must grapple with conference heavyweights like Wisconsin, Nebraska and Iowa – national contenders from the East like Ohio State, Michigan, Penn State, and Michigan State are met on a rotating, as opposed to permanent, basis.

The West provides a better platform for a team making a historic turnaround. It affords the Gophers a more realistic avenue for such a surge than say Maryland or Indiana in the East.

Minnesota’s schedule sets up well for Fleck’s first year at the helm. In non-conference play, it has a road trip to Oregon State and then Buffalo and Middle Tennessee at home in Minneapolis. From the Big Ten East it draws Maryland, Michigan State, and Michigan. Though that’s no picnic, Ohio State and Penn State aren’t an issue. It also gets fellow West heavyweights Wisconsin and Nebraska at home.

Phil Steele ranks the Gophers’ slate as the 102nd most difficult out of the 130 FBS programs in 2017. It’s the second easiest in the entire Big Ten, just eight slots harder than Indiana at No. 110.

The common denominator in the football revivals at Michigan State and Ole Miss are a coaching change. The right guy, at the right place, at the right time.

In the 10 seasons before Mark Dantonio took over at Michigan State, the Spartans went 56-52, earned one double-digit win season, and finished in the AP Top 25 once. In the ten seasons since he became head coach, they’ve gone 90-42, posted five 10-plus win records, and finished ranked six times.

Both scenarios compare well with what Fleck achieved at Western Michigan. In the four seasons before his tenure, the Broncos went 21-27 vs. the 30-22 mark during his run. That includes a 1-11 record in his first year (2013). Minus the slow start, WMU went 29-11 with Fleck, the best three years in the history of the program.

The most exciting element of a transformation is that the origins can’t be traced until after the change takes place. Could the 2017 season be the beginning of something glorious for Minnesota football?

I don’t believe this article is factual. Minnesota is tied for 19th most NCAA recognized national championships. Please see below.

The link you provided is for all sports. This article only covers football, and the stats source is linked at the bottom.

This article is about NCAA football FBS championships.

As far as the Pitt national championships it isnt very difficult to find:

The University of Minnesota claims 7 national championships in football but one of those is not recognized by everyone. Most media sources say we have six. (I’m a gopher btw).

This is a cool article, you should do more write-ups on other programs with new incoming head coaches.

I agree, this is a cool article. Minnesota was once a great program and if you look at all the ingredients they have today they again can be a great program. No reason they can’t be one of the top programs again at least in the Big Ten.