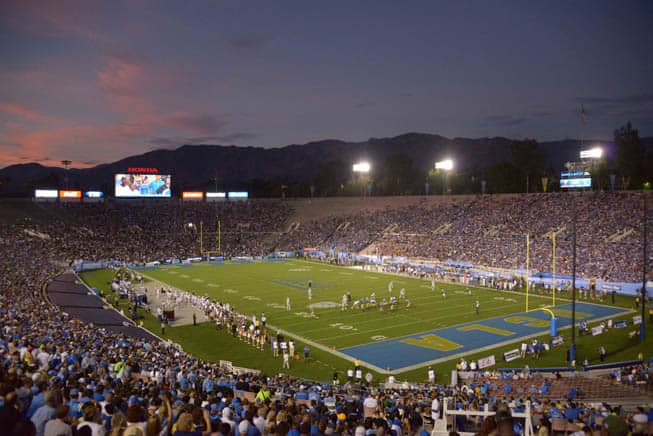 UCLA will host Michigan at the Rose Bowl in 2023. (Kirby Lee-USA TODAY Sports)

The Michigan Wolverines and the UCLA Bruins have scheduled a home-and-home football series for 2022 and 2023, both schools announced this morning.

This series was listed in a future football schedule document that the Big Ten accidentally leaked yesterday. It’s possible that the leak forced the two schools to go ahead with their series announcement.

Michigan will host the first game of the series in Ann Arbor on Sept. 10, 2022. The Wolverines will then travel to face the Bruins at the Rose Bowl in Pasadena on Sept. 2, 2023. The 2023 contest will be the season-opener for both schools.

“This home-and-home series is one we believe fans of both universities, and fans of college football at the national level, will enjoy immensely,” said UCLA Athletic Director Dan Guerrero. “We’re excited to face a quality opponent such as Michigan.”

These two games are the first announced non-conference match-ups for both schools for the 2022 and 2023 seasons.

UM had to get back to the Rose Bowl some how, MSU will do it the old fashioned way.

I would just love to visit Los Angeles again. It’s been since August 1972.

I can’t wait to see the Michigan / UCLA game either.