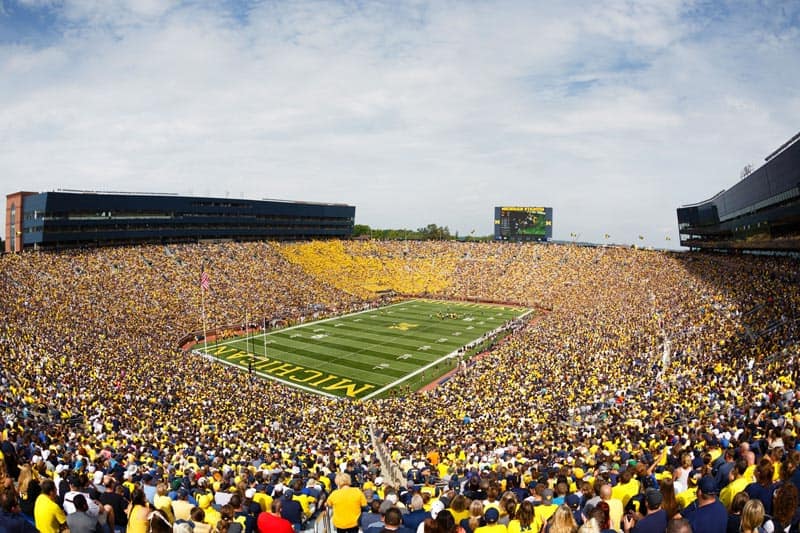 The Michigan-Texas series will begin in Ann Arbor in 2024. (Rick Osentoski-USA TODAY Sports)

The Michigan Wolverines and the Texas Longhorns have scheduled a home-and-home football series for 2024 and 2027, both schools announced today.

Michigan will host the first game of the series at Michigan Stadium in Ann Arbor on Aug. 31, 2024. The series will then conclude at Darrell K Royal – Texas Memorial Stadium in Austin on Sept. 4, 2027.

“A matchup of this magnitude doesn’t come along all that often,” said head coach Brady Hoke. “And when it does it’s special for both programs and the great fans that support each institution.

“This is also a special series for all fans of college football, and I anticipate great games just like the first contest played between the two programs.”

According to the Texas release, they have an “agreement in principle” with Michigan and it will be presented to the Board of Regents for consideration on Nov. 5-6, 2014.

Michigan and Texas have met only once on the football field — the 2005 Rose Bowl. The Longhorns beat the Wolverines in that game 38-37.

Once again, the best looking uniforms on the field together. Now let’s get both of these programs back to a level where these games are history-makers!

Good to see these kind of power home-and-home games continue.

Any word on if the 2019-20 ND-Texas series will be moved? And instead, will Texas play Florida those two seasons?

Florida would never agree to play a home & home out of conference, it would have to be a neutral site game

2019-20 ND-Texas games still on as of yesterday, but doesn’t mean they won’t cancel or move them soon.

“A matchup of this magnitude doesn’t come along all that often,” said head coach Brady Hoke, who will be on his fourth or fifth head coaching job by the time the first game of this series is played.

Good to see again the home to home games begin …….
Lets see how they rock…