Michigan and Notre Dame to renew football series in 2018 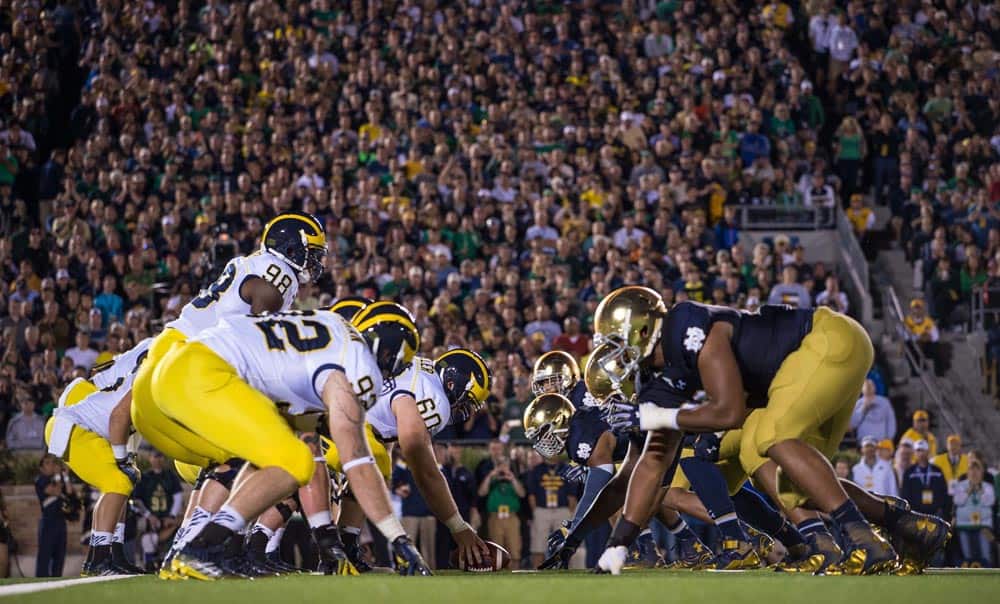 The Michigan Wolverines and the Notre Dame Fighting Irish will renew their football series in 2018, the two schools announced on Thursday.

Notre Dame and Michigan have agreed to a home-and-home series. The two schools will meet on Sept. 1, 2018 at Notre Dame Stadium in South Bend and on Oct. 26, 2019 at Michigan Stadium in Ann Arbor.

“This is a game that holds great significance for the student-athletes and coaches who compete on the field,” said Warde Manuel, U-M’s Donald R. Shepherd Director of Athletics. “A great deal of credit goes to Coach Harbaugh and Coach Kelly for initiating the discussion of scheduling this series. This rivalry is also important for the fans of both programs, and we look forward to renewing one of college football’s great rivalries.”

Michigan and Notre Dame last met in 2014 at Notre Dame Stadium where the Fighting Irish rolled to a 31-0 win. The two schools first met on the football field in 1887 and Michigan leads the overall series 24-17-1.

“We are having on-going discussions regarding extending the series with Notre Dame but nothing is finalized,” Manuel said. “I look forward to working with Jack Swarbrick to try to accomplish this common goal while striving to achieve a balance of seven home games each season. Scheduling is a fluid process and we need to be strategic in the way we schedule out into the future.”

The two schools were previously scheduled to play play from 2015 through 2017, but Notre Dame canceled those games. That cancellation, which left the Wolverines with no future games against the Irish, was primarily due to Notre Dame agreeing to schedule five games against ACC teams each season.

“Today is a great day for Notre Dame, Michigan and college football fans across the country,” Notre Dame vice president and James E. Rohr Director of Athletics Jack Swarbrick said. “Shortly after Warde Manuel was hired as Michigan’s athletic director, he and I began working to make this renewal of the series possible. That we could get games on the schedule as soon as ’18 and ’19 required a lot of work by our staffs and some great cooperation by the Big Ten, ACC and other schools that were on our future schedules.

To make room for the series, Michigan has cancelled a previously scheduled home-and-home series with the Arkansas Razorbacks and “will fulfill the obligations set forth in the contract.” Michigan and Arkansas were scheduled to meet on Sept. 1, 2018 in Ann Arbor and on Aug. 31, 2019 in Fayetteville.

Additionally, Michigan was previously scheduled to host Rutgers on Oct. 26, 2019. That game has now been moved to Sept. 28, 2019 to accommodate the UM-Notre Dame game.

In 2018, Michigan will face Notre Dame, Michigan State, and Ohio State all on the road, and their home schedule will look about like it does in 2016, very weak.

In 2019, Michigan will face Notre Dame, Michigan State, and Ohio State at home in what would be the final three home games for Michigan, within the space of 5 weeks (6 Saturdays).

If I’m a Michigan fan, I’m not thrilled about exactly *how* this series came back on.

Forgot to mention in my haste that in addition to all the schedule imbalance that comes as a a result of this series, Michigan essentially paid Arkansas 2 million dollars to not have one home game with them, a decent Power 5 and SEC program. Whoops.

Michigan is looking at the overall road games rather than who they are playing in them. With the 9th conference game just added, they are playing 5H/4A conference games in even years and 4H/5A in odd years. If they had stuck with the Arkansas series they would have played 8H/4A in 2018 and 6H/6A in 2019. By playing ND on the road in 2018 and at home in 2019, that makes both years 7H/5A.

They plan to address the MSU and tOSU scheduling issue with the B1G, and will probably get that changed. But not prior to 2018-19.

I get completely why Michigan made this move because how can you pass up on getting Notre Dame back, but man as an Arkansas fan this sucks. I was really looking forward to this series and now I’m not sure who Arkansas will get for a home-and-home those two years. Looking at the schedules there really isn’t anyone available. BYU maybe, but their schedule is already pretty full.

I wouldn’t be surprised to see BYU contact Arkansas about playing in 2018 and 2019. BYU has room on their schedule in both 2018 and 2019, and has wanted to play Arkasas for a while. Plus, BYU counts as a P5 under the SEC scheduling rules.

Liked this article until it got into the cancellation. There was room to add this series and keep Arkansas – would’ve been tough, but that would have been one hell of a schedule.

Michigan could have kept it but so far the CFP has shown they don’t really value playing 2 p5’s OOC with a 9 game conf schedule…ie…Stanford last year.

And all was right with the world again now that we have the top programs in college football playing each other again. I just don’t want to hear about the SEC backing out of another home n home series with a P5 team. Ohhhh wait, I don’t have to since Michigan cancelled this one but there will be a lot more hype on this game then there would’ve been around the Arkansas game.

When SEC backs out of P5 series it has been replaced with a non P5. Btw, the SEC also schedules the least p5’s and the most FCS. Let’s not froget the SEC team who avoid playing home/home OOC series vs p5’s It’s apples and oranges

It looks better if Notre Dame does it.

Sounds like the nonsensical rambling of Special Ed Fan

Sounds like nonsensical rambling by you. Michigan backs out of the series yet you hit the SEC with replacing P5 with non P5. I’m not bashing Michigan for replacing the game with ND & I don’t really care about the SEC playing the least P5 or FCS teams, that is a you problem that you just can’t get over.

None of these other schools really want to schedule the SEC. Look what happened to Wisconsin last year… Same thing this year. They want to subjectively quilify some G5s as P5s. Michigan wants to pay 2M to renew an old rivalry? Great for them! Bielema isnt crying. Just another BIG premadonna move.

ND is a much better game in fan interest, tv ,etc than Arkansas. The series home/away dates were clearly dictated by the years Michigan has 5 B10 conf home game vs 4.

Oregon needs a P5 home game in 2018. Can’t return the favor until 2023, probably a deal-breaker for the piggies.

It looks like ND still has an open date in 2018. As the trend is for P5 team to play at least 10 regular season games with P5 teams, scheduling another game with a P5 team would show ND is not going to fight the trend. Keep in mind in 2017 outside if BYU ND will be the only P5 team which can not pick up a “data point” for playing in a CCG.

What will ND do to fill in the open date?

Michigan v. Norte Dame is a regional rivalry that moves the needle very little outside Great Lakes States. It has been played many times – there is nothing unique here, unless both are Top 10. Similar rivalry to Georgia v. Clemson.

Michigan v. Arkansas would have been different and special. B1G in an SEC stadium. Hogs in the Big House. Once in a generation game.

You may have some valid points but I disagree. Even though I think it would’ve been great to watch the Hogz in the big house, I just think the ND vs Michigan game is on another level. Whether there in the top 10 or not, its always a big game, just like the USC vs ND game is big every year. The series has been missed.

Clemson v Ga is like ND v Michigan. Um. Do u know anything about the history of this game. The number one and two winning teams of all time…clemson doesnt even play georgia often.

Notre Dame has only won at Michigan once since the Lou Holtz era came to an end. I think the game hosted by UM should be at Ford Field so that the Irish have a better chance of winning the 2019 game.

Yes, it would make great business sense for the school to move it out of it’s 110,000 capacity stadium and put it 45 minutes away in a stadium that holds 65,000.

Well I’m thrilled to see wolverine meat coming back to South Bend it is a very big rival game for us IRISH fans. The last meeting was in South Bend could never get them to come plays us at home and when they did they seen very quickly how strong the IRISH nation is everyone thought it was a fluke but we will overcome the odds yet again and send them wolverine’s home with there tails tucked between there legs.

I personally would love to see the Fighting Irish play the Arkansas Razorbacks all my family is die hard hog fans but me I bleed blue and gold. I honestly don’t think the hogs would hold a candle to the Irish. But I don’t think they would ever consider it they would back down to us just like they do when it comes to the issue of the Hogs and ASU Redwolves they know they would get beat to scared of a challenge

@Shep…agreed…it would be astronomicalky stupid to EVER move a ND -Mich game away from the largest football stadium in the country…The BIG HOUSE!!!!
@William Johnston…How’d 2016 turn out for your sorry Sissy Irish? Not too good huh? Learn your history dude

@Jim….you obviously don’t know the history of UM ND or UM OSU…..its like Georgia Clemson? Realky? Really? and you favorite team is? Georgia st? Do tell…you and Keowee really don’t have a clue.