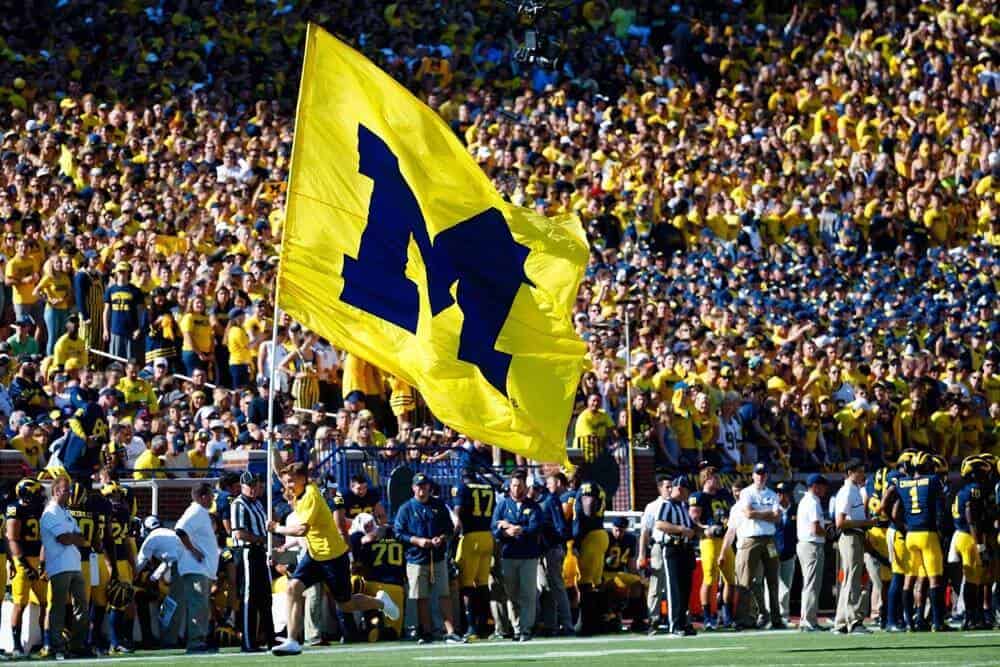 The Michigan Wolverines have completed their 2018 and 2019 football schedules with the addition of two non-conference games, the school announced on Thursday.

Michigan has added a home game against the Western Michigan Broncos for Sept. 8, 2018, and WMU will receive a $1.2 million guarantee. The Wolverines open the season with a trip to Notre Dame on Sept. 1 and later host SMU on Sept. 15.

New to Michigan’s schedule in 2019 is a home game against Middle Tennessee on Aug. 31. The Wolverines will pay the Blue Raiders a $1.6 million guarantee for the game.

Michigan is also slated to host Army on Sept. 7 and Notre Dame on Oct. 26 in non-conference action.

Big Ten opponents for Michigan in 2019 include Rutgers, Iowa, Michigan State, and Ohio State at home and Wisconsin, Illinois, Penn State, Maryland, and Indiana on the road.

Interesting that Michigan has ND on the schedule during BIG play, normally BIG teams plays OOC at the beginning of the season. I assume this was the only time that both teams could pair up. They’re also dishing out a nice little pay check to M.Tennessee & W.Michigan, some FCS teams don’t even get that much.

No FCS teams get anywhere close to 7 figures, and that MTSU payout is absurd – someone must’ve owed a favor

MTSU is not a FCS team, they play in Conference USA.

What is the latest on Michigan trying to weasel out of the Washington series in 2020-2021? Now that Petersen has Washington football on the rise, is Harbaugh running scared and is using the Virginia Tech series a a bailout reason? If so, why not cancel Virginia Tech and keep Washington-that is certainly a more storied rivalry over the past 40 years with 4 Rose Bowl encounters and 4 OOC games having been played.

Haven’t heard anything definitive yet.

It’s because the CFP committee has more or less made it clear that you only need 1 P5 OOC game in your schedule, especially if you already have 9 conference games. When UM scheduled UW, the B1G still had 8 conference games.

There’s no “weaselling”, it’s stupid to make the schedule harder than it needs to be. Plus Fuente at VT is building a strong program anyways.

I hope Harbaugh & Co don’t cancel the 2020-21 series with UW. Certainly would put the UW schedule in a bind. How much is the buyout for Michigan and when is the deadline to cancel?

Guarantee: For each game played, the home institution shall pay the visiting institution $1,000,000 on or before February 1 following the game in question. If either team fails to appear for one of the scheduled games, that team shall pay to the other team a cancellation fee of $1,500,000, within ten days after the scheduled game date. If the cancelling team is the visiting team, that team shall also forfeit and not be entitled to receive the guarantee amount set forth in the first sentence of this paragraph. No cancellation fee shall be paid if the parties mutually agree irr writing to cancel a scheduled game.

UM certainly is weaseling, Ohio State will be playing Texas and Notre Dame OOC 2 years in a row.

Michigan is weasels going. TRying to cancel out of what would be your most challenging OCC game for another cupcake will not impress the committee. MIchigan already has enough weak Big Ten patsies. LOok at Rutgers, Maryland, Purdue, Illinois to name the most obvious.

Look at Washington-they canceled a gimme home game with Nevada to play Auburn @ neutral site Atlanta (only 2300 miles from Seattle) and a hard 2 hour drive from Auburn. They also play BYU plus nine PAC 12 games which from top to bottom is a bigger grind than the bottom half of the Big 10.

I always hoped UM vs UW could become a frequent home-home series. The Huskies have always been good (tough) opponents. Let VA Tech go.
Re: why make the schedule any tougher than need be? Because we are Michigan. We don’t back down from a challenge. Soft Big Ten schedule? Not our fault. Talk to the geniuses in ChicagoLand.

Michigan has traditionally always played a major program in their first or 2nd week of the season non conference games. This has always distinguished them from the programs such as Florida, FSU, Alabama and even Ohio State. I’m glad Notre Dame is back in the mix. No big issue with playing VT instead of Washington. VT has been a good program over the years and Washington more of a recent shining star in the West. GO BLUE!

If you sign a contract you keep you word. You don’t just change something so that it makes it easier for you. You certainly don’t do that if you schedule some thing three years ago and then try to bail out because you feel things might be too difficult and put your opponent (Washington) in the position of trying to come up with a team of similar stature at the last moment when no one is available.

Per the damage these kind of cancellations does to their schedules (and SOS in the eyes of the CFP committee), I don’t understand why the AD’s for some programs are not requiring a much more significant cancellation penalty. I question the ethics.