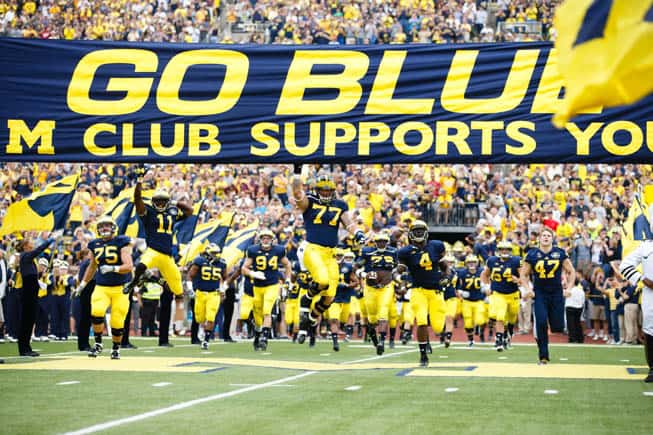 The Michigan Wolverines have added games against Air Force, SMU, and UCF to their future football schedules, the school announced today.

Each of the games announced today were listed in the Big Ten future schedule document that was accidentally leaked last week.

Michigan will host UCF at Michigan Stadium in Ann Arbor on Sept. 10, 2016. The game will be the first ever meeting between the two schools.

The Wolverines also announced that their Sept. 24, 2016 game vs. Ball State is being moved to a later season. The date was unannounced, but could be Sept. 8, 2018 according to the B1G schedule leak.

Michigan has nearly completed their non-conference schedules through the 2019 season. The Wolverines have one opening in 2017, which could be filled by a neutral site game vs. Florida, and two in 2019.

Did Michigan schedule away games versus BYU and Colorado? Did they already play at those two schools? If the answer to both of those is “no,” I’m pretty surprised. BYU and Colorado don’t seem like the kind of schools that would agree to 1-and-done road games.

No, Michigan is not playing at either school. Both schools do schedule one and does for the right price which schools like Michigan will pay. Colorado also did a one and done at Ohio State last year.

Is michigan afraid to play brian kelly’ s notre dame football team? Usc? Ucla? Oregon? Arizona? You know what i mean! Competitve schools that elevate your program. Alabama, for instance. Nick sabin is similiar to bear bryant, simply because of strength of schedule. I prefer playing against the best. It’s good way to improve. Winning isn’t everything, it’s the only thing. I wish jim harbaugh and his team nothing but the best. Good luck jimmy! What a positive for michigan wolverine football! Sincerely, T.G. Dunkwear

When the next Michigan Minnesota Brown Jug rivalry game to be played.

I can’t wait till this season starts