Miami (FL) in Talks to Play Alabama or LSU 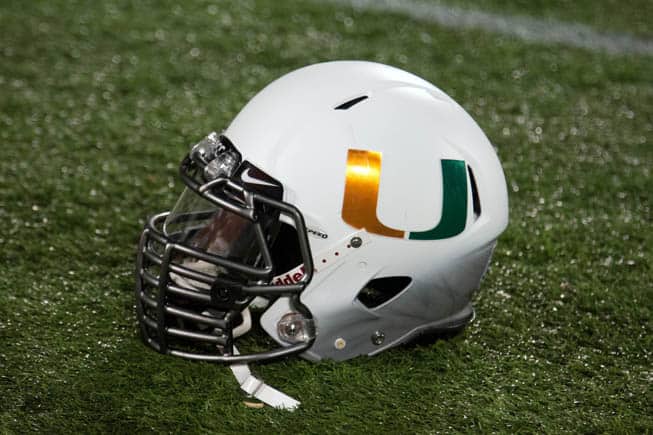 The Miami Hurricanes are in talks to play a future football game against the Alabama Crimson Tide or the LSU Tigers, Barry Jackson of the Miami Herald has reported.

If Miami were to play Alabama, the game would take place in 2017 as part of the Chick-fil-A Kickoff Game in Atlanta. The game would also be at the new Atlanta stadium, which is currently scheduled to open in March of 2017.

Should the Hurricanes play the LSU Tigers, the two would meet at AT&T Stadium in Arlington as part of the 2018 Cowboys Classic.

According to Jackson, Miami will “consider playing in one but not both.”

The Hurricanes haven’t faced a team from the SEC in the regular-season, other than Florida, since playing the Tennessee Volunteers in a home-and-home series back in 2002 and 2003.

With strength of schedule an important part in being selected to the College Football Playoff, many schools are evaluating their future schedules and looking for potential upgrades.

The Hurricanes already have power-five opponents set for the next couple of seasons. Miami hosts Nebraska in 2015 and travels to Notre Dame in 2016. The Canes also play a home-and-home series with Rutgers in 2018 and 2019 and Michigan State in 2020 and 2021.

lol miami can barely beat the wake forest’s of the world…this is a joke.

and FSU…and after this year, Ga Tech & Virginia

The time has come for Miami to become relevant again. Miami sits on one of the gold mines of recruiting in south Florida, and has the ability to draw good recruits from other states. It is time for Al Golden to show he can recruit the talent and have the coaching staff to make the Hurricanes relevant. At this tome based on recent history Miami would be scheduling over its head to schedule a game like this.

Miami needs to rise to make the ACC Coastal division theirs, like FSU does in the Atlantic. If they can do that the ACC might be able to leave a huge mark on college football in the playoffs before the SEC. The key is getting these tough match ups in ooc play and racking up those Ws.

Miami couldnt beat their way out of a wet paper bag

So you’re really comparing the worst years of Bama football to the current era? First of all, no one is afraid of Miami, and not many consider them a major conference opponent right now. Bama would handle them easily on the road or at home. As a fan, I would love to see them do a home and home series with the likes of USC, Stanford, or pretty much any high-profile team. A series was supposed to be scheduled with Michigan State but they backed out. Is that ‘Bama’s fault, as well? Keep griping while the Tide keeps winning.

Mark, you just partially proved bbd’s statement. “No one is afraid of Miami”, so Alabama schedules them rather than a major conference power.

Exactly. Alabama would never schedule a top 15 OOC opponent like an LSU does just about every single season. No surprise the SEC Headquarters are in Bama and Bama plays the weakest schedule every year of all SEC teams. They are in the commissioner’s pocket but that doesn’t come as a big surprise, they’ve always cheated.

Yall are stupid. Bama plays a weak schedule? Since when? If you ask me the ACC is one of the WEAKEST conferences. Whos good. FSU? Oh, right they beat up on weak teams all day long they should be good with all the practice games they have. Same as Oregon and Ohio state. They both are in weak conferences. Every team has a few cupcake games and then they start the real teams. Bama plays LSU, Texas A&M, and Auburn every year. Those are respectable opponents. Tennessee, Arkansas and Florida are fluctuating in skill every year. Bama seems like they have a weak schedule because they win. Stop hating Bama because they win.

Deuce your dumb. In 2017 Miami team will be able to compete with Alabama. If you pay attention to the entire college football instead of just Bama. The Bama era is over buddy. Dynasty is out the window loser. Let’s go canes !!!!

It’s all a dream anyway. Miami and Florida should meet every year at a neutral site like Tampa or Orlando. That will take care of playing one of the Power 5 conferences. Then every 5th and 6th year, play the home and home, then back to the neutral site for 4 years. We all know that it’s about money and this might be the way to save and earn the most money.

It’s Bama’s histotry they don;t play home and home series. You might want to look up the number of away games they played in the 90’s..try 2. There will never be a series between USC, Stanford b/c Bama will not travel. Btw, unlike Bama those schools also have AD’s that do their jobs thus book games. Bama is whining now they can’t find a game in 2015 to fill the OOC. Of course they wait to the last minute to book. .ie…they have not a single game booked in 2016 or nay other year. Compare that to USC, Stanford or other schools that are serious about playing OOC series vs other major schools. Bama will be whining again next year they can’t find games for 2016.

Anyone that starts their comment with “LOL” is hard to take seriously.

Now that every other coach in the SEC voted to stay with an 8-game conference schedule (everyone but Nick Saban that is) instead of 9, don’t be surprised to see a series pop up. That was a big reason why the schedule was not set. The Pac-12 has a set 9-game conference schedule and those AD’s, who are just so serious about playing OOC opponents, had no uncertainty to deal with.

Also, those west coast and B1G teams HAD to schedule stronger opponents because their conference schedule is so weak. Without it, they may not make the new 4-team playoffs. SEC teams don’t have that problem.

You’re obviously a hater of all things Bama, so no matter how strong/high-profile of an OOC opponent is scheduled to open the season (Michigan, Clemson, WVU, VT, etc) it all means nothing without a home and home? Makes sense.

I think what everyone is trying to say, regardless if they despise the crimson tide and/or the SEC in general for w.e reason, is that if you’re in the strongest conference then flex your muscle. Neutral site games should be reserved for match-ups that had problems with fans of the opposing schools getting into brawls and for when travel costs for a home and home series is not advantageous. But ask yourself this: who wouldn’t be excited about [email protected] then [email protected] the very next year? I know I would and I don’t really care to much about the PAC 12 or the SEC but that match-up is a high octane one. Sure a Miami-Alabama series may not be as exciting to most people but it would be more so than a neutral site meeting.

Why doesn’t Bama play Oklahoma again and see how that works out for them! Cry on Sabanites!

If Miami ends up playing against either Alabama or LSU, I hope that it is an excellent game with an exciting down to the wire finish.

Alabama @ Stanford & Stanford @ Alabama in back to back years would be exciting and it could very well determine which one of those schools would end up making the College Football Playoff in a given year.

I agree it would (likely) be a down to the wire game and hope it is LSU in Arlington that gets scheduled. Geaux Tigers!

How about Alabama-Penn State in 2015, and Alabama-Florida State in the same year.

Bama should play the ‘Canes in Joe Robbie/Pro Player/Land Shark/Sun Life Stadium. Then Nick Saban can steal ALL their recruits.