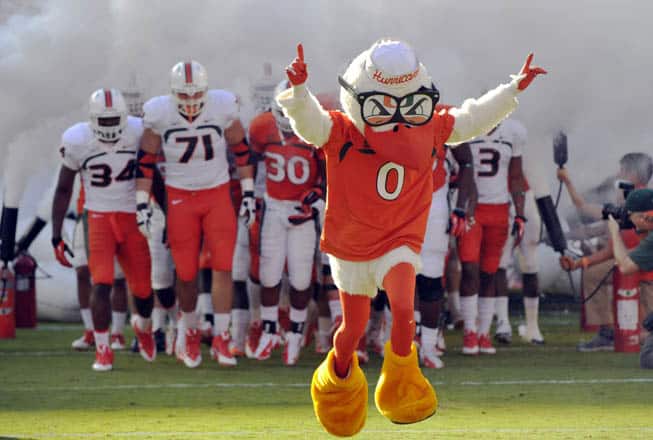 The Miami Hurricanes are close to renewing football series’ against the Florida Gators and the Florida International Golden Panthers.

There is one requirement, however. Florida will only play Miami at a neutral-site, which Foley also stated last year.

“I would have to think about Orlando,” Blake James told the Miami Herald. “That’s not real neutral but it’s an easy distance to our campus.”

The Gators and the Hurricanes met last season at Sun Life Stadium in Miami. Miami won the game 21-16 and has beaten the Gators in seven of the last eight contests dating back to 1986.

Earlier this year, UF announced that they were extending their annual home-and-home series with rival Florida State through the 2018 season.

That announcement essentially stifled any chance of Florida and Miami playing a home-and-home series any time soon. With the rigors of an SEC schedule, the Gators certainly don’t want the added toughness of playing the Seminoles and the Hurricanes in the same season very often.

Miami is also reportedly close to scheduling Florida International again. The two schools met in 2006 and 2007, with Miami winning both games.

But the 2006 contest was marred by a bench-clearing brawl in the third quarter. After Miami went up 14-0, a fight broke out which resulted in the ejection of eight FIU players and five Miami players.

Neutral site? 1. Can they afford 2 neutral site games a year? (With that pitiful OOC schedule they have, they would make the home game up by playing Eastern Kentucky and Eastern Michigan.) and 2. When UF played Miami at SunLife last year, I swore the crowd favored Florida. And playing in Miami would help recruiting that area. It’s just UF being UF. No wonder they wasn’t very good last year. (And all this is coming from a UGA fan!)

I was at the game. Every time we (Miami) play FSU or UF at home, we’re promised these huge contingencies. That September 2013 game against UF barely had 10k Gator fans out of 77k… Not sure why you’d think it favored Florida.

I would do a dam thing florida wants. It home and home or nothing. There talking about playing Texas in the future so stop the cap about to tough a schedule. Man up. Yeah Kentucky, Vanderbilt tough conference games. Blake James move on forget the gators. We have the all time record, last 7 out of 8 including the last game. They don’t want a home and home. I guess there our butcher forever then. Come to daddy gators.

Is that Georgia speak?

How do you consider this “close to renewing a series” as the headline states. Previous UF-Miami games were generally “home-and-home”, But as your report suggests UF does not want a home-and-home series.

And the UF-Miami agreements are not even close to being finished. It appears just a beginning discussion.

So please correct your headline.

A series can also be a series of games, not just home-home.

its a good point. its a misleading headline to try to increase hits. The article gives zero indication that UF and Miami are “close” to an agreement.

James is right, Orlando is not a “fair” neutral site, but it would be a big payday for UM and a good game for ESPN, so it will probably happen at some point. Maybe not for several years because of other games that both teams have already scheduled.

I think the gators are scared to play us

I don’t care where UM vs UF is played. This game should be played every year. It is an underrated rivalry and it creates a huge buzz in the state of Florida when the game is played. I prefer home and home series but a neutral site is fine. In the mid 80’s the series was played in Tampa at the old Sombrero. I believe that when USF has there stadium finished, then the rivalry can be renewed at Raymond James Stadium in Tampa in 2018. That year sounds logical considering both teams have their out of conference schedule mostly completed through 2017. I hope this happens but I am not holding my breath.

As a Seminole fan – I can tell you that UF is scared or Miami!!! This game will not happen!

Yo NC State schooled you and Clemson let you off the hook! But the bad news is that you were the #1 and the BCS expects better from you to WIN but you trailed behind unranked NCSU!!!!!!!!!!

It’s about money. Away games pay much, much less than home games. Miami has been almost as bad as florida lately. That’s like saying they’re too scared to play Kentucky.

Scared of Miami? You’re insane dude! FSU won the NC and we renewed the contract with Ya’ll. Why the hell should we be scared of Miami? Florida just didn’t play well in the red zone or they could have easily won that game against the Canes. Anynody who watched the game knows that. I hope it’s renewed.

UF has to play FSU. The legislature would require it if they tried to cancel the series. Trust me the Gators would drop them if they could. They’ve dropped everybody else who’s a challenge in the non-conference schedule. UF has lost 6 of the last 7 to Miami. They want no part of a potential early season loss. They want to be 4-0 going into SEC play.

That’s why the field is 100 yards and not 80 dumb ass. If only if and buts were candy and nuts we’d all gave a Merry Christmas. Just like a gator fan.

If you cave into the gators and play anything but a home and home you can keep my season tickets. We own the series, 8 of the last 9 and the last game. We don’t need them. I have many friends that are season ticket holders that feel the same way. There our b itches forever lol. You dictate terms. [email protected]

Bring it to Raymond James Stadium