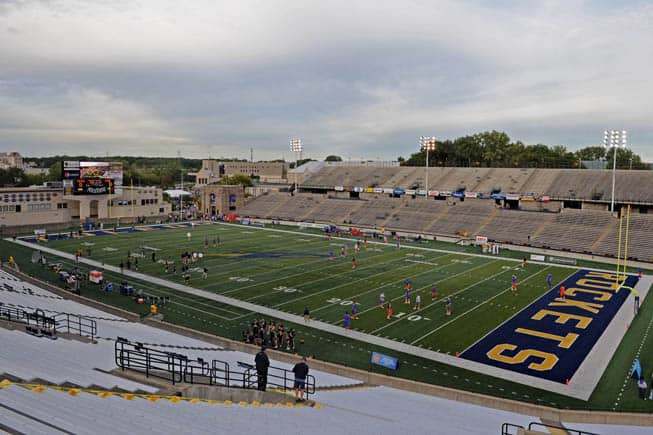 The Miami (FL) Hurricanes and the Toledo Rockets have moved their previously scheduled 2015-16 home-and-home football series to the 2017 and 2018 seasons, according to a release by Toledo today.

Toledo was previously scheduled to host Miami at the Glass Bowl on Sept. 5, 2015 and travel to face the Hurricanes at Sun Life Stadium on Sept. 3, 2016.

Miami and Toledo initially announced this series back in July of 2010. In their first and only contest back in 1987, the Hurricanes beat the Rockets 24-14 at home. Miami went on to win the national championship after defeating Oklahoma in the 1988 Orange Bowl.

Toledo also announced today that they have added New Hampshire to their 2014 football schedule. The Rockets will host the Wildcats on Aug. 30. The rest of their 2014 non-conference schedule includes Missouri (Sept. 6), at Cincinnati (Sept. 13, at Paul Brown Stadium), and at Iowa State (Sept. 20).

Why does Miami schedule home and home games like this?

I don’t know, I rather see South Florida regularly than games like this, why not Central Florida regularly if we having trouble getting games. Throw in Basketball, Baseball games, Volleyball, etc. as a packaged deal, I sure the other Florida schools would sign up.

I hope you do go, but I rather not play this game. I rather have South Florida or Central Florida, we recruit from the Tampa and Orlando areas. If we need an what should be an easy game instead of an FCS school, why not Georgia State they are upgrading from FCS to FBS, they play in the Georgia Dome (Atlanta). Or the schools I mentioned in my other comments.

Because neither Bethune-Cookman, Elon, Charleston Southern, UT-Martin, or Florida Gulf Coast were available.

-Well Florida Gulf Coast doesn’t play football, and its more like Florida A&M, Bethune-Cookman, Savannah State, as of late. But I know what you mean. If this in place of FCS school, okay, but how about a closer one, like Florida Atlantic, Georgia Southern, Georgia State, South Alabama, Troy, Appalachian State, etc maybe some place close to where we recruit then.
-I don’t get this game, does very little for Miami. Toledo has put together some good games, not knocking the school, so I wonder if this to upgrade the schedule in place of a FCS school, but still Ohio is not a state we recruit from. Yeah we have a kid from Ohio on the team, but not worth the trip. I would have dropped Toledo for Cincinnati, instead of this switch, sorry Toledo fans, Cincinnati has a little more rep behind them.
-I rather we play Florida Atlantic, Florida International, Central Florida, South Florida, Georgia State would be good using the Falcons stadium, yeah we play GT but how about years in which we have GT home.

Maybe because Toledo beat Cincinnati 2 years ago and they would like to play the weaker team, same story from all the FBS teams never want to travel and risk getting upset.

That would be good!

Or that Penn State series, or maybe we will have a Florida-Miami series those years, ha I kid.

Its this Miami’s new AD moving the game?

Its being moved now by the AD obviously so what do you think? I kind of wish this series would get canceled but it is what it is now .