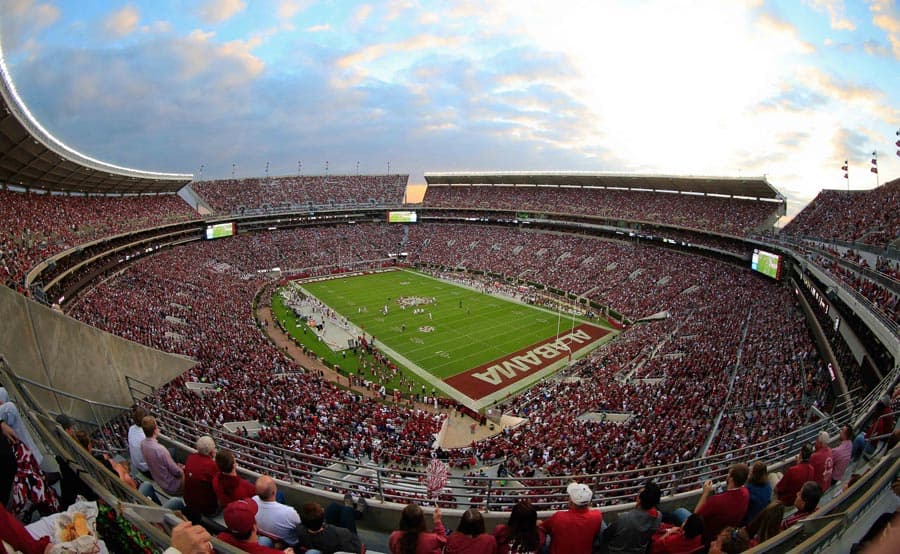 The Mercer Bears will play at the Alabama Crimson Tide in 2017 and 2021, the school announced on Thursday.

Exact dates for the games have yet to be determined, but both will be played at Bryant-Denny Stadium in Tuscaloosa.

“We are excited to add one of the elite college football programs to our schedule in 2017 and 2021,” said head coach Bobby Lamb. “This will be a great opportunity to test ourselves against a championship program in one of the most storied gameday environments in the country.”

Alabama has now tentatively completed their non-conference schedule for the 2017 season. The Crimson Tide are scheduled to open the season against Florida State in Atlanta and later host Fresno State and Colorado State in Tuscaloosa.

Super excited for these games

Me too!!! Its a great opportunity for Mercer’s football program to get not only a nice paycheck, but for them to get great media coverage even if it will be aired on SEC network! Its good to see the bridge between FCS and FBS football!

I was being sarcastic. This is a disgrace. Once again, the SEC for as great as they are proves once again how cowardly they can be.

How do SEC fans and Bama fans justify this?

Alabama is still playing a tougher schedule than about 125 D1 schools.

Alabama doesn’t. That’s the point. Do you not get that?

Guess what? Baylor’s schedule is worse. Alabama starts the season with FLORIDA STATE, and its other OOC’s are with Colorado State (now a top MWC team, and arranged when former Bama coach was HC at CSU), and Fresno State (a longtime top MWC team). Plus, Alabama winning its division will have 9 Conference games, no different from Baylor with no conference championship game. Baylor’s playing Incarnate Word. Go home.
Mercer is at least committed to moving to the top of FCS quickly, and getting into the Colonial in time, now that schools like ODU, Ga State, and Southern’s App State and Ga Southern have opened up the region for a new FCS player.

This is your reason for everything… SEC.
If that’s the case, why don’t you play 1 more conference game?

9 conference games in the Big 12 doesn’t make you better.

In the last two years, the SEC has had 34 players drafted in the first two rounds of the NFL draft. The Big 12 has had 6. Playing against the level of talent that these other conferences are playing against in comparison to what the SEC has to play week in and week out, 9 conferences games can only even the field…

But it doesn’t even do that. The SEC is still far and away the better conference, with better players, and better teams.

See, there are two kinds of football fans. Those that realize that not every D1 team is equal and understand the game of football and then there are people like Maverick who don’t.

Pretty sure the SEC east is a joke.

The SEC East may not be the best division in football, but at worst they are second behind the SEC West.

You’ve just lost all credibility. You are just a biased fan. SAD.

I am literally shocked you could spell ‘credibility.’

Look, if winning the SEC was easy, it would be called your mom.

Wow, I’m receiving “intelligence” attacks from someone that just doesn’t get it. If you can’t see that a conference playing one less week of conference games helps the conference’s overall perception, then you should take a math class, because it is an indisputable fact.

Once again, playing 9 conference games against teams that aren’t good to begin with doesn’t matter. Alabama will play more players drafted in the NFL draft in eight games than most will play all year.

The SEC is loaded with it. Other conferences aren’t. That’s what you continue to ‘not get.’

Better coaches cause teams in the SEC don’t mind paying top dollars cause college football just means more to fans in the south. Better teams, 9-2 in bowls speaks for itself. An SEC quarterback won a national championship plus you have TWO SEC QB’s in the super bowl, with 22 active players just from the SEC in the game, YES, better players.

Another cup cake scheduled for Bama. What with winning their 167 national championship!

The matchup fans have been clamoring for.

Hey, I’m a Mercer fan and have been looking for an excuse to visit Bryant-Denny. Tickets should be relatively cheap and I get to cheer my team on where they will definitely need some support.

Rare Mercer mention here! I understand the Bears might get destroyed but happy to see them get a game in Alabama nonetheless. My only other concern is that they already have Auburn in 2017 too so it may be too much for Coach Lamb and the players to handle in one season. I’d rather have one of those two games moved to another year.

This is interesting, Bama has not played them since 1939/40, it like stepping back in time in some ways. Nice to see Mercer reinstated their football program, good for them.

What you fail to realize is that Saban wants to play an fcs school late in the season for two reasons: 1) To give his starters a rest before the Iron Bowl and 2) To evaluate his backup players for the following year especially with recruiting season around the corner. If there wasn’t an advantage for Saban to play an fcs progran, then he would not schedule one.

Alabama will win this game handily, but don’t forget Wofford beat SC, Jackson State lost to Auburn in OT, and GA Southern beat Florida last year. You can never count out an fcs team unless their playing Alabama under Saban.

Sorry. Thanks for the correction Jim.

It’s not that good of a non-conference schedule. One great neutral game, two above average Group of 5 teams, and an FCS team. This is in addition to 8 conference games.

Now compare that to USC: One great home game (Texas), One great away game (Notre Dame), one average Group of 5 team, and no FCS games. This is in addition to 9 conference games.

Great to see Mercer getting a big fat paycheck, but this is Bama vs a limited scholarship team.

Mercer has a full FCS complement now. They only played in the Pioneer for the initial season to get started. They’re exactly where Troy, Georgia Southern, App State and many other 1AA’s that have gone on to FBS were.

Max scholarship players for an FCS is 65 players… For FBS it’s 85.

Exceptionally impressive for the defending national champions to schedule such a powerhouse team. The rest of their schedule is OK. But, when are SEC schools going to bag the annual FCS opponent?

Yes, I to hate these FBS games. However, for fans of other schools to throw stones at Alabama for playing in these games is laughable. Check your own schedule. And by the way, Alabama had the toughest schedule in college football on their way to a national championship in 2015.

Sorry, but the Big 10 is bringing to an end games scheduled against FCS opponents. None on future schedules for Penn St. and Ohio St., for example and the Big 10 has eliminated one non-conference game all together and replaced it with a 9th conference game like the Pac 12.

Why don’t all you guy list your team and conference and brag on how much better it is than the SEC.
What no ba–s?
Just all MOUTH!!

I love the Mercer Bears, but this is a disgrace. The results will be as unbalanced and unfair as Ga Southern/Bama 63 – 7. Shame on Bama, they should not play smaller schools. I hope the paycheck will be worth the injuries our team will incur.

Without these schools that are willing to share the wealth with the FCS some of the smaller schools might have to drop their programs. But some high and mighty schools like the Big Ten (or eleven or twelve) or Big Twelve ( or eleven or ten) want to keep all the money to themselves and not allow the smaller schools to have a chance to advance. Great that the SEC is doing this for the other schools.