MAC, Sun Belt to meet in Camellia Bowl beginning in 2014 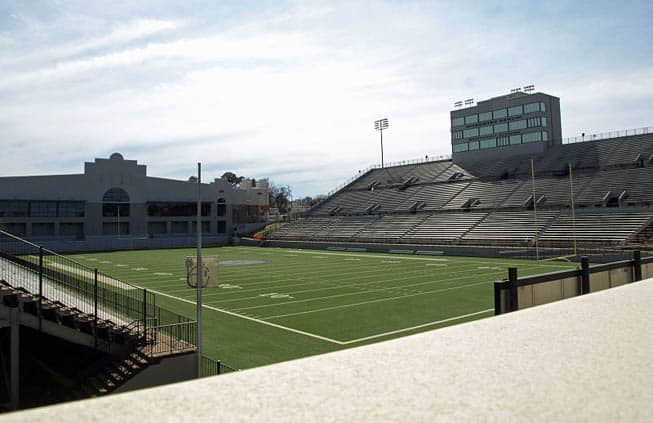 The MAC and Sun Belt will meet at the Cramton Bowl. (Chris Pruitt-WikiMedia Commons)

ESPN Regional Television, the Mid-American Conference, and the Sun Belt Conference have announced the creation of the Camellia Bowl beginning in December 2014.

Teams from the MAC and Sun Belt will square off each year from 2014 through 2019 prior to Christmas in a nationally televised game on either ESPN or ESPN2.

The site of the game will be the Cramton Bowl in Montgomery, Alabama. This 25,000 seat stadium opened in 1922 and was once home to the annual Blue-Gray Football Classic. Currently, it is the home stadium for four area high schools and the Raycom College Football All-Star Classic.

“The Mid-American Conference is proud to partner in the creation of the Camellia Bowl beginning with the 2014 season,” said Dr. Jon Steinbrecher, Mid-American Conference Commissioner. “The historic Cramton Bowl will be a great venue for our student-athletes and fans. Additionally, Montgomery’s entertainment district will provide a fun and lively bowl experience for all involved. I want to thank all parties involved for their diligence in creating this event, especially Montgomery mayor Todd Strange.”

“The Sun Belt Conference marks a significant moment in its history by partnering with the Mid-American Conference, ESPN, and the city of Montgomery for what will be a tremendously successful bowl game,” said Karl Benson, Sun Belt Conference Commissioner. “Montgomery has all the ingredients for a great bowl game and experience for our student-athletes and fans – a great venue in the renovated Cramton Bowl, a vibrant downtown with many new hotels and restaurants, and a location in the middle of the SBC footprint that will make travel very convenient for fans throughout our league. With every football season the SBC continues to show its strength and deserving place amongst college football’s best and soon a talented SBC team will represent our league well in this exciting new bowl game.”

The Camellia Bowl will be the third college football postseason bowl game in the State of Alabama. It joins the BBVA Compass Bowl in Birmingham and the GoDaddy Bowl in Mobile.

The Sun Belt is also working on another bowl that would be played in Little Rock, Arkansas.

“We haven’t given up on Little Rock yet,” Benson said. “The Sun Belt is still very interested in Little Rock, but we obviously need to have an opponent. I think Little Rock, for some of the same reasons that Montgomery worked, makes just as much sense as a game in Memphis or Shreveport or Birmingham or anyplace else in the footprint.”

Little Rock would be a great venue for a post season football bowl.

Too many bowls for the Sun Belt if they add Little Rock as well. How often do 4-5 Sun Belt teams win 6 games? Especially now that they have been weakened by CUSA.

Weakened? CUSA took the weakest of the SBC schools.

Really disappointed to see the Little Caesars / Motor City Bowl going away, it was a great chance to see some MACtion in Metro Detroit (at least we’ll have the MAC Championship game). But I have a feeling that the B1G or ACC may have trouble filling the Lions bowl game every year, so one of the regional teams will probably slide into that.

Why? Who the heck wants to go to Detroit at Christmas time? Not exactly my idea of an award for a decent or good season.

I disagree Ben, the Sun Belt is on the verge of being one of the powerful mid-major conferences.

I’m actually okay with this. The main reason being that these teams do not get enough TV time.At the very least they get some more money going into the schools that could help them with their needs.

another meaningless bowl involving second tier teams from third rate conferences in fourth rate cities playing in front of half empty small stadiums! how exciting! Bowl games used to mean something-a reward for a great season…now it like getting a certificate of participation in grade school track.

another meaningless bowl involving second tier teams from third rate conferences in fourth rate cities playing in front of half empty small stadiums! how exciting! Bowl games used to mean something-a reward for a great season…now it like getting a certificate of participation in grade school track.

Stay tuned! ESPN reporting C-USA to add two new bowls in Boca Raton, FL and in Nassau, Bahamas. If the Pizza Bowl survives, there could be 39 bowl games in 2014.

Hey hater I mean nampa do you have anything good to say? Ever? The Sun Belt and MAC deserve bowl games too. Plus you ever been to Montgomery? The city has really improved in the past 10 years. Downtown has been revitalized and the stadium looks great since the renovation. Now it may not be paradise but it has improved.

Actually have to disagree. The smaller/mid-major schools are some of the most exciting to watch during bowl season. And Montgomery is in the heart of the south, and nearly 45 miles away from Troy and only a couple hours from South Alabama. This bowl will be filled for sure and if anything these two conferences are second rate conferences.

Nampa, have you ever played football? There are so many great football players in the MAC and Sunbelt conferences. Not everybody gets to play in the Rose Bowl but the MAC had 87 players on NFL rosters last year. That’s a lot of talent on display. Montgomery has a great football tradition and I would fly there for this game in a heartbeat. The only question is who will UMass be playing?

Kevin Faulkner moved to an on campus stadium in 2012.

The new $4.2 million athletic stadium at Faulkner University opened in the fall of 2012. The total complex includes the 4,200-seat stadium, the John Mark Stallings field and the Leopold D. Lee field house. Faulkner Stadium is the new home to the university’s football team, men’s and women’s soccer teams and the marching band.
The fall of 2012 marks the first season for football games played on the Faulkner campus.

Ok, I got the info from Wiki so I guess it was outdated.

no problem, you do a great job I just wanted to let you know
thanks

The University of Kentucky would like to go to this meaningless bowl. Even though they are a last place team in a first rate conference. Of course they might not get by Western Kentuky ranked 4th in the Sun Belt Conference.

Bowls should be a reward and an honor for those who perform well, not an entitlement for mediocrity.

If the teams aren’t good enough to entertain you, change the channel. I am sure there is something on Nick Jr. that will hold your attention.

Bill,
maybe if we ignore nampa and he will go away
I sure can’t wait to those Idaho Vandals come to the plains of East Alabama!!!

It is nice to know that a few thousand people really care about these new bowls. At the rate we creating new bowls , in a few years some teams will have to go to two bowls a year just to fill them up. Come on let’s get real, the SEC now will have 10 spots minimum to fill in bowl games out of 14 teams. Let see 10 divided by 14= 72 %. So maybe we should create enough bowls so that those 28% that are left out should have a bowl to go to.

Don’t worry nampa, they have a ways to go before they create enough bowls so that your Idaho gets into one.

sorry Ray “Good one” not go one…to much Scotch!

yawn….we want more G5 teams to play Power5 teams in the postseason. OR at least make these games a kind of 1 vs 4 and 2 vs. three two square off for another bowl a week later. Kind of make top to bottom playoffs where by which teams can possibly have two postseason games (Camellia and Motor City Winner go to St. Petersburg or BBVA Compass

Did they have find that gun that puts a gun to people’s head and forces them to watch bowl games? The way people whine about them, I’m sure they found them.