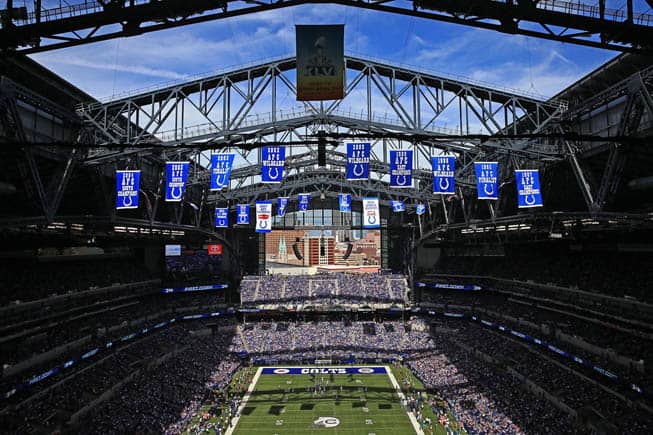 Stadium Journey, a website and monthly magazine which focuses on rating stadium experiences from around the world, has released its list of Top 100 Stadium Experiences of 2013.

The highest rated football venue is Lucas Oil Stadium, home of the NFL’s Indianapolis Colts. Lucas Oil Stadium is ranked 4th overall, received a FANFARE Score of 4.9, and was described by Stadium Journey Special Correspondent Sean MacDonald as possibly “the best sports experience in the world.”

Notre Dame Stadium is the highest ranked college football stadium at No. 8 and a FANFARE Score of 4.7. Paul Swaney, Stadium Journey Co-Founder, wrote of the iconic stadium:

“It is one of those special places that all sports fan aspire to visit, even if they are not fans of college football. It doesn’t matter what inspires you to go and see a game at Notre Dame Stadium; whether it is the fervent fan following, your appreciation of history, or the movie Rudy. Whatever your reason, you would be justified to go and see a Fighting Irish home game, and chances are your expectations will be exceeded.”

Which stadium was rated as the best experience for 2013? Amsoil Arena, the home of the Minnesota-Duluth Bulldogs of the National Collegiate Hockey Conference (NCAA Division I).

Listed below are the Top 10 stadium experiences for College Football and the NFL:

Has the author ever been there? I think most Trojans would agree that Memorial Coliseum doesn’t belong in the top 10 let alone top 5.

While the article suggests that it discusses the best venues of 2013, the write ups are dated. The write up about Notre Dame Stadium is three years old. The comments to the write up are dated 2010-2012. The College Football Hall of Fame has closed and moved to Atlanta. Not very timely.

Ever heard of a place called Camp Randall?

Notre Dame huh. Let’s see, the seats are wood planks that are splintering, 4″ wide; lots of “comfort” there. the scoreboard is so old; I remember one like that back 50 years ago when I was a child going to games. no video replay. NBC paid for their lights for goodness sakes and they can’t put up a video replay screen; they added 40,000 seats but didn’t add extra bathrooms; what a bunch of crap of it being the best in college. This must have been written by an alum.

They didn’t add extra bathrooms??? The whole second level that was added has their own bathrooms, you don’t have to go down to the old section to take a leak. But yes, the wood plank benches are terrible!!! They also have better food in the upper section that was added on…

Chris, when was the last time you were at a game at Notre Dame, just curious….

I was at the Notre Dame Pittsburgh game in the undefeated season last year. Definitely new bathrooms in the second section. Also, ND is indeed the best venue for college football and is repeatedly voted as such because of the environment, campus, and friendliness.

Chris, are you an IRISH hater????? There is more to the experience than a “4” wooden plank”. Look at the overall experience!!!!! Most people would love the opportunity to go to a game there!!!

Hi folks. I’m the founder of Stadium Journey. First, it should be cleared up that we have a network of writers. I certainly didn’t individually go to more than 1,500 stadiums last year, but our team, working on a consistent rating scale template did.

The Notre Dame review is in fact from this season. The page has existed and we have had previous iterations, which is why the comments seem dated.

I have been to Camp Randall, and it’s a great venue. I think Madison is one of the best, if not THE best college town in all the land. Wisconsin would have come in in the top 20 had we stretched the list out that far.

I’d also invite you to do a “crowd review” for any venues you have visited. We use ratings from our members as a secondary factor when compiling lists like this.

Thanks for the feedback…

as an Alabama fan it pains me to say this but no Jordan Hare? I went to the Auburn vs Miss. State game it was electric and that is even before they started to hit their groove this season Jordan Hare deserves to at least be in the top 8 collage football stadiums of 2013

Is this a joke…ever been to Athens, Ga. Stadium right in the middle of campus. Beautiful setting..

Bubba, the article is about all of college football, not all of the SEC. Fly to Chicago next fall and rent a car for a fall Saturday in South Bend. You get 18 inches on a wooden bench, a hot dog and a hot chocolate if it’s cold. The interior of the stadium is painted battleship gray in honor of the US Navy, Maybe the Blue Angels will fly in. Forget the football, the music alone, the art, the fall color and the Disney-like hospitality make it worth the trip. When the band sits down, you get to watch America’s winningest team.

Living in the past is why Michigan has become old and stale losers. Go Green!

Heinz Field??? Carolina??? CLEVELAND?!?!….most average places to watch a game ever. Ever been to Denver?? San Fran?? (I know its falling apart and old but still better than at least half these places), METLIFE??? Ya’ll don’t even know.

century link should b #1, best venue in sports. did I mention it’s the loudest in the world. let’s go 12 man

Are you high?? Ever heard of a place called Death Valley in Baton Rouge??

I am from Australia, I enjoyed the game between Notre Dame and BYU on 23 November 2013 the stadium and atmosphere was awesome there nothing like this in OZ. Thanks for amazing moments while I was on holiday in US. Go the Irish this year.

Glad you had a great time!

That was the coldest game at Notre Dame Stadium in at least 20 years. If you stayed until the end of that one, you are one sturdy individual.