LSU vs. Wisconsin at Lambeau Field in 2016 Finally Official 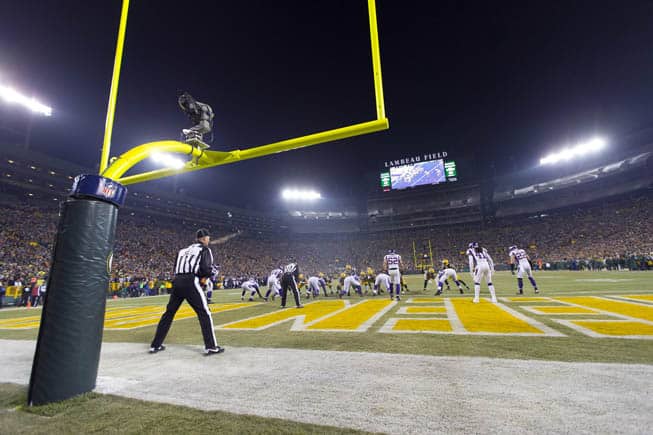 It’s finally official! The LSU Tigers will face off against the Wisconsin Badgers at Lambeau Field in Green Bay on Sept. 3, 2016.

Wisconsin made the announcement this afternoon after the UW Board of Regents approved the contract. Reports indicate that Wisconsin will receive $3 million for the game.

“I’m very excited about this game and I hope our fans are, too,” Wisconsin Director of Athletics Barry Alvarez said. “We have a great working relationship with the Packers and Mark Murphy and I want to thank them for all their help in getting this game scheduled. It is a tremendous opportunity to showcase our program, a great experience for our players to play in one of the most revered stadiums in the country and a terrific chance for our fans to see us play a quality opponent in the state of Wisconsin.”

News of the LSU-Wisconsin game on the “Frozen Tundra” was first reported back in April by the Journal-Sentinel. The two schools will first meet to open the 2014 season at Reliant Stadium in Houston, Texas on Aug. 30.

Wisconsin has also completed their 2016 football schedule with the addition of Akron (Sept. 10) and Georgia State (Sept. 17). We first reported the Georgia State contest on Tuesday.

The 2016 season is the first for the Big Ten with a nine-game conference football schedule. In the inaugural season, Wisconsin will have four home games and five road games.

The Badgers will host Ohio State, Nebraska, Illinois, and Minnesota at Camp Randall Stadium. They will travel to face Michigan, Michigan State, Iowa, Northwestern, and Purdue.

LSU’s 2016 football schedule remains in flux. They were scheduled to open the season against Southern Miss on Sept. 3, so that game will now have to be postponed or canceled altogether.

Also, the SEC is having ongoing discussions about their future football scheduling format. They will still play an eight-game conference slate through 2015, but could go to nine-games as early as 2016.

For now, the Tigers are set to host Jacksonville State on Sept. 17 and South Alabama on Oct. 15.

the tundra is not frozen on labor day.

totally a win for lsu, they have a more explosive offense than the badgers…
im not going just for lsu because wisconin does have a defense and an offense, but what I a trying to say is overall lsu is better…

we will be briging our shovels to dig a frozen hole for the badgers!!! Geaux Tigers!!!

I want tickets NOW
wooohooo!!
Go Badgers-its time for a jump around on a tiggers tail

What a road trip! Cheeze at the end.

Props to LSU for actually traveling north of the Mason-Dixon line because Bama, Ole Miss or Miss State won’t!

Rather see this and other SEC teams travel up north in November than the SEC playing FCS schools in November to see them in colder weather but this is baby steps I guess.