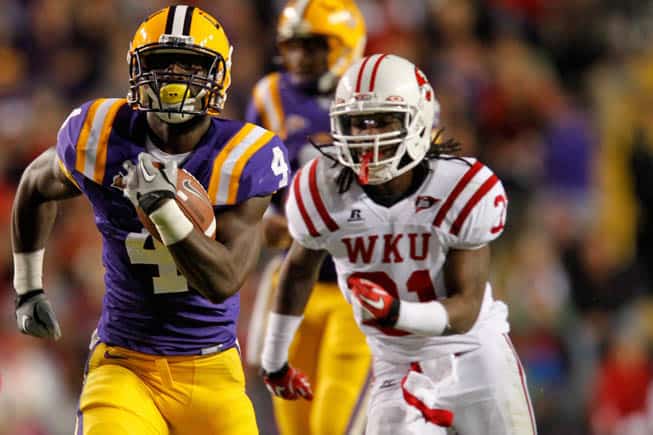 The LSU Tigers and the Western Kentucky Hilltoppers have moved their previously scheduled football game in 2016 to the 2015 season, the Bowling Green Daily News has reported.

Yesterday, we reported that Miami (OH) had scheduled a 2015-16 home-and-home football series with Western Kentucky. The 2016 game was listed for Sept. 17 at Miami, which was the same date that Western Kentucky was scheduled to visit LSU.

Now Western Kentucky will make the trip to Tiger Stadium in Baton Rouge on Nov. 14, 2015. It will be WKU’s second trip to Death Valley following their 42-9 loss there in 2011.

If Bobby Petrino is still the head coach of Western Kentucky in 2015, it will be his third trip to Baton Rouge and fifth meeting overall against LSU. Petrino was 2-2 against the Tigers when he was at Arkansas, but suffered both losses on the road.

Western Kentucky also has four non-conference games slated for 2015. The Hilltoppers travel to Indiana (Sept. 19), host Miami, OH (Sept. 26), and travel to LSU (Nov. 14). WKU was previously slated to host Army on Sept. 26, and it’s currently unknown what date that game will be moved to.

It doesn’t matter if its 2016 or 2015 it’s still gonna be fun to whoop Bobby Petrino & his Hilltoppers. Just hope he will keep his mind on coaching.

There is no scenario that would put Petrino there in 2015. If he has another incident like he did in Arkansas he will be run out of town.

Or if he behaves himself, he will be immediately hired away by whatever major program goes 4-8 this season and fires their current coach.

You are probably correct. When I was writing that, I was thinking it would only be his 2nd season at WKU.

another crappy all home game non league schedule for LSU with four crappy teams coming to Baton Rouge for a paycheck to support their money losing football programs. The only time you ever see most SEC teams play decent non league teams is in a bowl game. No offense ASU but you haven’t done anything in 17 years.

this year alone SEC teams against other BCS conference teams
LSU vs TCU
Alabama vs Va Tech
Tennessee vs Oregon
Florida vs Miami and FSU
Miss St. vs Ok St
Ole Miss vs Texas
South Carolina vs UNC, UCF and Clemson
Uga vs Clemson and Ga Tech
Auburn vs Wash. State
Arkansas vs Rutgers
Vandy vs Wake Forest
Missoui vs Indiana
Kentucky vs Louisville
so other than Texas A&M all SEC teams play at least one BCS team from another league and last time I checked none of these are bowl games.
Please in the future know what you’re talking about before typing.

Did you forget when LSU smashed Phil Knight’s pet Ducks in Dallas a couple of years ago?