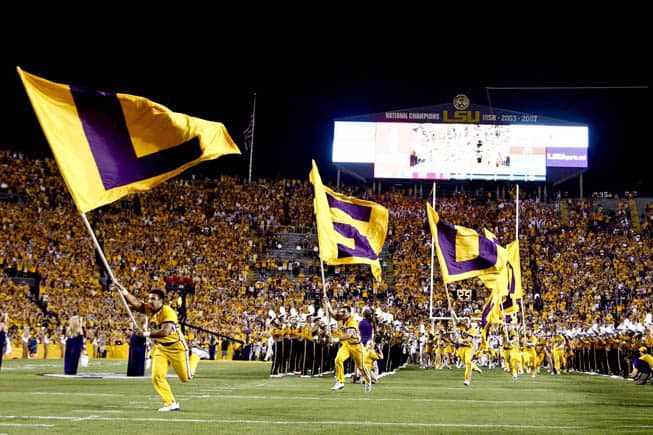 The LSU Tigers have made several changes to their future football schedules over the past few months, including the postponement of two home-and-home series and date changes for other games.

Here is a breakdown of LSU’s future schedules from 2015 through 2023 along with other information we obtained from the school.

The Tigers still need to schedule two non-conference games in 2015, and one of those has been rumored to be the first game in a home-and-home series vs. Syracuse.

LSU will receive $2.1 million for playing Wisconsin at Lambeau Field. According to a copy of the contract, LSU will wear white jerseys while Wisconsin will wear red in both the 2014 and 2016 games.

Southern Miss will receive a guarantee of $950,000 for the game on Sept. 10, 2016. This contest was contracted back in 2005 and has had its date changed at least three times. It was pushed back a week from Sept. 3, 2016 after the Wisconsin game was scheduled.

If the SEC moves to a nine-game conference schedule beginning in 2016, either the Jacksonville State, Southern Miss or South Alabama game will have to be moved or bought out.

There have been rumors of a cancellation or postponement of the LSU-NC State series, but it remains as contracted. LSU is scheduled to visit NC State on Sept. 12, 2020.

If the SEC moves to nine games and LSU does end up playing Syracuse in 2017, the Tigers will need to move or cancel one game.

On Sept. 20, 2005, LSU and Arizona State entered into an agreement for a home-and-home football series to be played in 2015 in Baton Rouge and 2016 in Tempe. But last August, news of a postponement of the series broke.

LSU and Oklahoma also agreed to a home-and-home football series way back in 2005. The two were scheduled to meet on Sept. 15, 2018 in Norman and Sept. 21, 2019 in Baton Rouge, but OU announced a postponement of the series last November.

New dates for the series have yet to be set, but the two schools have agreed to “determine suitable dates to schedule the games for back to back seasons sometime after the 2019 season” and will “work in good faith to finalize these dates on or before July 1, 2014.”

They are saying GEAUX TIGERS will be syracuse to the Schedule

It is French Cajun Slang for Go, which lsu copied from the University of Louisiana in Lafayette starting using in the early 70’s, along with all the other colleges and High Schools starting using.