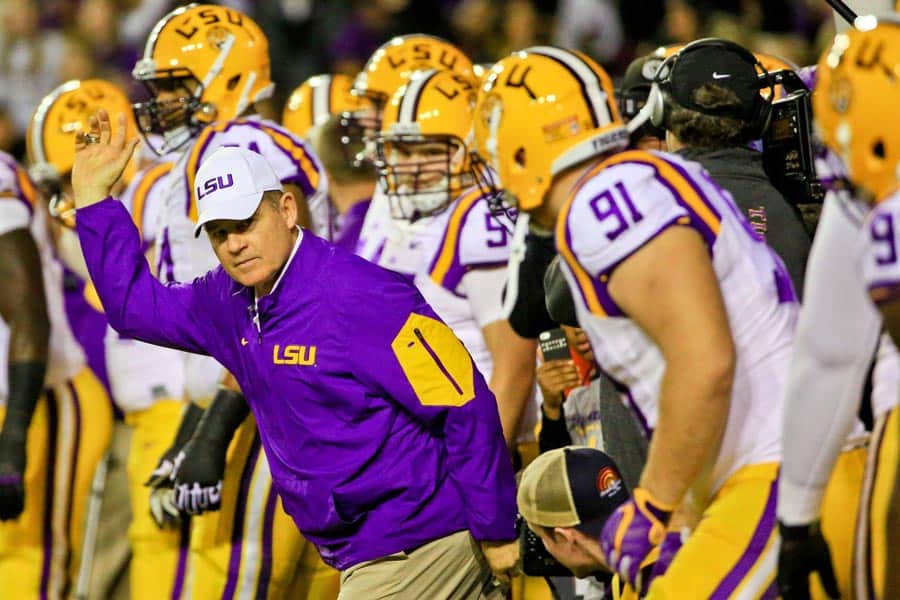 The LSU Tigers have completed their 2018 non-conference football schedule with the addition of three opponents, the school announced today.

“We want to continue to schedule teams from our state when possible, which allows resources to remain in the state and the fans in Louisiana to experience the best venue in the country, Tiger Stadium,” LSU Vice Chancellor and Director of Athletics Joe Alleva said.

LSU opens the 2018 season against the Miami Hurricanes. That game, which was previously announced, will be played on Saturday, Sept. 1, 2018 at AT&T Stadium in Arlington, Texas.

The Tigers and Hurricanes have met 12 times on the gridiron. In their last matchup, LSU defeated Miami 40-3 in the 2005 Chick-fil-A Bowl to extend their lead in the series to 9-3.

One week later on Sept. 8, LSU hosts the Southeastern Louisiana Lions in their first contest of the season at Tiger Stadium in Baton Rouge. The two schools’ first and only meeting came back in 1949 at LSU.

On Oct. 20, 2018, LSU hosts in-state foe Louisiana Tech at Tiger Stadium. The Tigers have won 15 straight games against the Bulldogs and hold an 18-1 series advantage.

In SEC play in 2018, LSU is scheduled to host Alabama, Ole Miss, Mississippi State, and Georgia and travel to Arkansas, Auburn, Texas A&M, and Florida.

Woah!!!! BIG TIME SEC SCHEDULING! LSU is really going for world class non conference games. I can hear ESPN’s pundits speaking, “LSU is the number 1 team in the land. They just won 4 non-conference games, and only one was close against Miami.”

Maverick, who do you cheer for?
Man up.

Schoup, special ed? Get a life man and grow the hell up. The South is not stupid and comments like yours shows that maybe you are!

When you play in the toughest conference, you dont need tough OOC games; fairly simple logic.

I hope this is sarcasm.

8 conference games compared to 9 conference games in a 14 team conference means 7 of those teams will have 1 less loss (if that 4th OOC game is against a nobody team that the SEC always plays). If you played 9 games, some of your teams would have more losses and show that your conference is more on par with the other conferences than you’d like to admit.

Maverick,
So your saying the SEC plays 4th OOC game that is a nobody? Please provide me with a FBS team out there that does not play (in your words) a “nobody team”? Your basically looking the for the SEC to go to 9 conferences games so they can have more loses, now I get it. The last time I checked the power 5 conferences seemed pretty even to to me in the bowl games, they all went to big time bowls, not just the SEC. Last year you & others luv to blame the OOC for the SEC not doing so well in the bowls, this year the SEC is 8-2 in bowls, NOTHING HAS CHANGED! The SEC is on par with the other conferences, once again, it all balances out in the end, the end it is the part you don’t seem to get.

No one is taking away from the accomplishments of the SEC. We are simply stating that the SEC continues to play the least amount of Power 5 games. Your “argument” that the SEC plays 8 games in the toughest conference doesn’t mean that they are excused from playing a weak non schedule and 4 games as such. If you were as great as you say you are, you would play at least 10 Power 5 games.

How does this not make sense?

You think Clemson wants to play an SEC non conference game and wreck their perfect season before the championship game? You think they would be in the discussion if they played a couple SEC teams as non conerence games and lost?

LSU WILL NOT SCHEDULE IN STATE, FORMER SEC RIVAL TULANE BECAUSE LSU KNOWS TULANE WILL BE WINNING TEN TO 11 GAMES PER YEAR WITH COACH FRITZ.

Willie Fritz may do very well at Tulane but that has nothing to do with the rivalry with LSU, they cancelled it back in 09′ when it was announced that LSU would pay Tulane $700,000 to void the final six years of the home-and-home series. LSU held that it would benefit if the remaining games were all played in Baton Rouge. Not wanting to give up its home games, Tulane agreed to end the series early, though the teams did agree to play one future game in New Orleans. LSU also has won the last 18 in a row against the Green Wave, don’t think they are that worried about it.

I was at Sam Houston State when Fritz brought the program to national prominence, the man is a winner.

For you bunch of SEC haters count up the number of bowl games won by the SEC. I will count for you illiterate retards –8,-2
What does ooc have to do with how good you are?
schoup and Maverick, man up who do you cheer for?
No ba–s

Mav the only thing I can say is last year when the SEC went 7-5 in Bowls they mattered. Now that the SEC is 8-2 the Bowls and they don’t matter. It has to be the same each year brother. Not saying you said this but I’ve heard many Big 10 (14) can’t count fans say this over the past 2 seasons. When the SEC does well “bowls games are exhibitions”. Let the SEC rule and “bowl games are meaningless”. Please decide the rule and apply it every year

by the way pulling for Clemson,,,my love for the SEC ends when it come to the Crimson Tide
WDE

Nawlpete you finished 3-9 this season and 2-6 in bowl games.
So there is going to be a Miracle in Bayou this fall.

The sec dont have to go ooc to play a great team. Almost ever week they play a top 25 team just in conference games. No other conference can say that. Thats why they have to play top teams to even have a chance to make the playoffs. #sec.haters