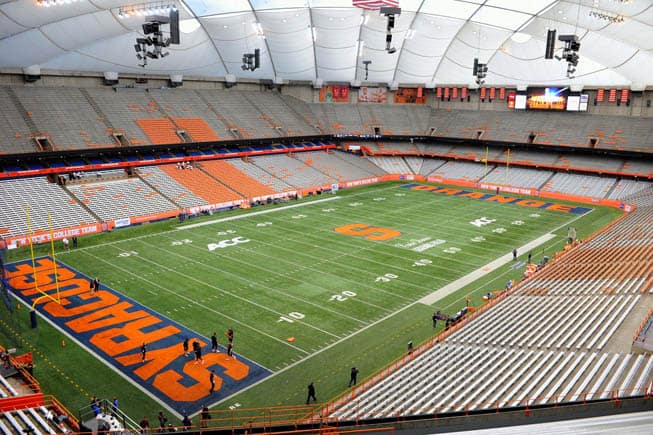 Syracuse will host LSU at the Carrier Dome in 2015. (Rich Barnes-USA TODAY Sports)

The LSU Tigers and the Syracuse Orange have finalized a home-and-home football series for 2015 and 2017.

News of the series was first reported last month by CBSSports.com. Then, in a release announcing a series vs. UCLA, LSU acknowledged the series with the Orange was close to being finalized.

Syracuse will host the first game of the series at the Carrier Dome on Sept. 26, 2015. LSU will host the second and final game at Tiger Stadium in Baton Rouge on Sept. 9, 2017.

“It is a great opportunity to match the tradition of our program against the storied tradition of LSU,” said head coach Scott Shafer. “As members of the Atlantic Coast Conference we play some of the best teams in the country. This is a chance for our student-athletes to play against the one of best outside of our conference. I know they will be juiced up to have the opportunity for our fans to come to the Carrier Dome to watch some great football in a matchup of the ACC and the SEC.”

LSU and Syracuse have met twice in their history, both in postseason bowl games. LSU defeated Syracuse 13-10 in the 1965 Sugar Bowl, and then the Orange evened the series with a 23-10 victory in the 1989 Hall of Fame Bowl.

“This is another attractive non-conference series that our fans will enjoy and our football program will benefit from,” LSU Vice Chancellor and Director of Athletics Joe Alleva said. “To be able to bring LSU football to the northeast part of the country for a football game will be a unique experience and then to have Syracuse return the trip to Tiger Stadium in 2017 will be a nice addition to our home schedule.”

LSU also announced today that they will open the 2015 season at Tiger Stadium against the McNeese State Cowboys on Sept. 5.

In 2017, the Tigers have four games, all of which are slated for Death Valley — Georgia Southern (Sept. 2), Troy (Sept. 30), and NC State (TBA). The NC State game was previously set for Sept. 9 and, with Syracuse taking that date, may be moved to a future season.

Syracuse currently only has one other non-conference game announced for both the 2015 and 2017 seasons. The Orange are slated to host Central Michigan in 2015 (Sept. 19) and then again in 2017 on a date to be announced.

Les Miles is 41-2 in out of conference games while at LSU.

LSU is a great program. The Tigers had some great OOC wins in the 2011 and 2010 seasons, including wins over:

That’s a whole lot of FCS, Sun Belt, MAC, and Conference-USA to pad the record. Only 9 OOC games against BCS teams in 6 seasons (including bowl games) and half of those BCS opponents were very pedestrian.

Show me a program with a substantively better OOC record over the same period and we’ll talk.

That Dome is so ugly. Saw it from the outside and didn’t even know it was a sporting facility. It’s painted tan. Tan. Won’t be making any road trips there.

A great place especially if it’s cold and rainy outside and the beer vendors serve you at your seat.

Hate to burst your bubble but one of those LSU losses came in Capital One Bowl, against PENN STATE!!!!! I heard PSU and LSU are working out a neutral site game against each other, there is an opponent that is worthy of LSU to play in Non-conference!

Alabama had a H&H with Penn State a couple of years back that everybody seems to forget.