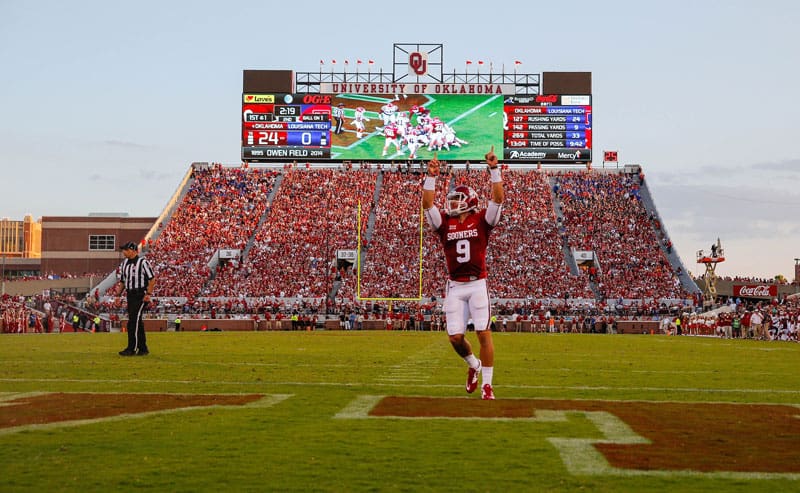 The LSU Tigers and the Oklahoma Sooners have a contract for a home-and-home series on the books, it just won’t be played this decade.

But in November of 2013, Oklahoma scheduled a new home-and-home series with the UCLA Bruins for 2018 and 2019 and, at the same time, announced that the LSU series was being postponed.

Per a November letter between LSU and Oklahoma, the two schools agreed to “determine suitable dates to schedule the games for back to back seasons sometime after the 2019 season” and will “work in good faith to finalize these dates on or before July 1, 2014.”

According to a document obtained by FBSchedules.com from LSU, the two schools have satisfied that obligation and finalized new dates. But fans wanting to see these two teams square off will have to wait a long time. Oklahoma will host LSU on Sept. 18, 2027 and will return the trip to LSU on Sept. 9, 2028.

If LSU and Oklahoma actually end up meeting on the gridiron those two seasons, they will have played 22 years after first signing a contract.

LSU and Oklahoma also share a new honor–they have the home-and-home series that is scheduled the farthest into the future by one season. The series eclipses Nebraska-Tennessee, which is set for 2026-27.

What’s the record for a game that is scheduled for the furthest in the future? This has gotta be right up there.

Probably this one, although Nebraska-Tennessee was moved to 2026-27 last year.

Yeah, I was going to respond to it as well, this game is really out there!

Nathan Did you even READ the comment before posting your question??? He was asking about all-time scheduling records, not the currently scheduled game that was mentioned in the article.

lots of 1st graders, offspring of these two schools’ alumni, jumping for joy….

So much for “let’s just focus on the next game”

Everyone do us read this, paused, and realized how old we’d be when it was played. Sigh.

By this time, the Big 12 will be dissolved and this will be a conference game for the Sooners.