LSU may play Wisconsin at Reliant Stadium in 2014 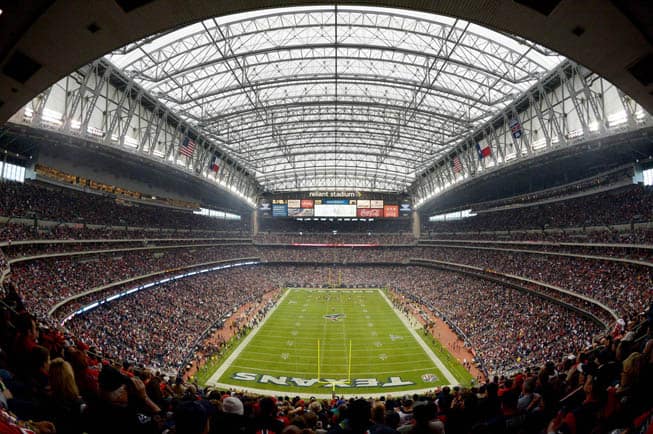 FOX 26 Sports in Houston has reported that the LSU Tigers will face the Wisconsin Badgers in the 2014 Texas Kickoff Classic at Reliant Stadium. The game would likely be played on Saturday, Aug. 30, 2014.

But LSU associate athletic director Verge Ausberry quickly denied that report and stated that a contract is not in place to play Wisconsin in Houston.

“Nothing has been finalized,” Ausberry told The Times-Picayune. “We’re still talking to other teams.”

In an interview last night on WNXX 104.5, LSU athletic director Joe Alleva also said that the game has not yet been confirmed.

“We are in conversations with Wisconsin, as well as a couple of other teams, actually” Alleva stated. “We would very much like to play our opening game next year in Reliant Stadium. The opponent has yet to be determined, but Wisconsin is a very good possibility.”

“There’s no deal yet, we haven’t worked out any kind of financial deal yet. Our goal is to play our opening game in Reliant Stadium against a quality opponent.”

Based on the FOX 26 report and comments from Alleva, it seems that the LSU-Wisconsin game is very likely to happen if the financial details can be agreed upon.

A report surfaced last week that Wisconsin wanted to play LSU at Lambeau Field in Green Bay. There have no further public discussions on that possibility. The upcoming College Football Playoff coupled with discussions on a nine-game SEC schedule may delay non-conference scheduling past the 2014 season.

In an interview with ESPN.com, Wisconsin athletic director Barry Alvarez provided an update on LSU-Wisconsin:

“We haven’t signed a contract yet, but we are still in discussions with them and ESPN. Hopefully we can finalize that in the near future.”

Okay, LSU is just being cheap. They have a common tactic of scheduling games against high-ranked northern teams in Texas, so it’s counted as neutral but might as well be at home. They did vs. Oregon back in 2011, and they want to lure Wisconsin into it as well. “Just say ‘no’ to LSU in Texas.”

LSU has options if Wisconsin doesn’t want to play LSU in Texas then they can go schedule Grand Valley St. to play in Wisconsin. Give LSU credit for scheduling some tough and exciting games out of conference. And LSU schedules tough despite the fact that it is the only program to play Florida, Alabama, Auburn, Arkansas, and now Texas A & M every year.

Oh EverettHuges youre just mad because the SEC is a tough conference to play in let alone beat the teams in the conference. LSU demands high gate reciepts as it rightfully should as it has won 2 national championships and by the way since the inception of the BCS ALL national titles belong to SEC schools namely LSU and Alabama.

If they decide to go to a playoff expect many of the slots to be filled with SEC teams and them to emerge as champions. They are the better conference in Division 1 football. Just except it and move on.

Chris, maybe I’m missing something, but the BCS has been around since 1998 and has crowned 15 National Champions with the SEC winning nine (9) of them, not all as you have written. If you’re speaking of just the recent past history of only the past seven years then yes the SEC has won every BCS Championship and you are correct. History tends to be in motion and at this point in time the SEC has bought the best Football Conference in College. Let’s all enjoy College Football for what it is, entertainment.

It could have been more if it weren’t for the pre domination bias that kept some Damn good SEC champions out of the ship.

The game at Lambeau still might happen. Discussions from Wisconsin’s side still include a ‘home-and-home’. Reliant in 2014 and Lambeau in 2016. The original plan was Lambeau in 2014, but it appears LSU wants the ‘home’ game first.

Does the SEC ever play games outside their footprint?

yes they have to play in this

Bring on the Badgers! And/or, let’s play Michigan, or even better Ohio State! Tigers would beat any of them! Fear the Hat!