LSU at Florida game postponed, may not be rescheduled 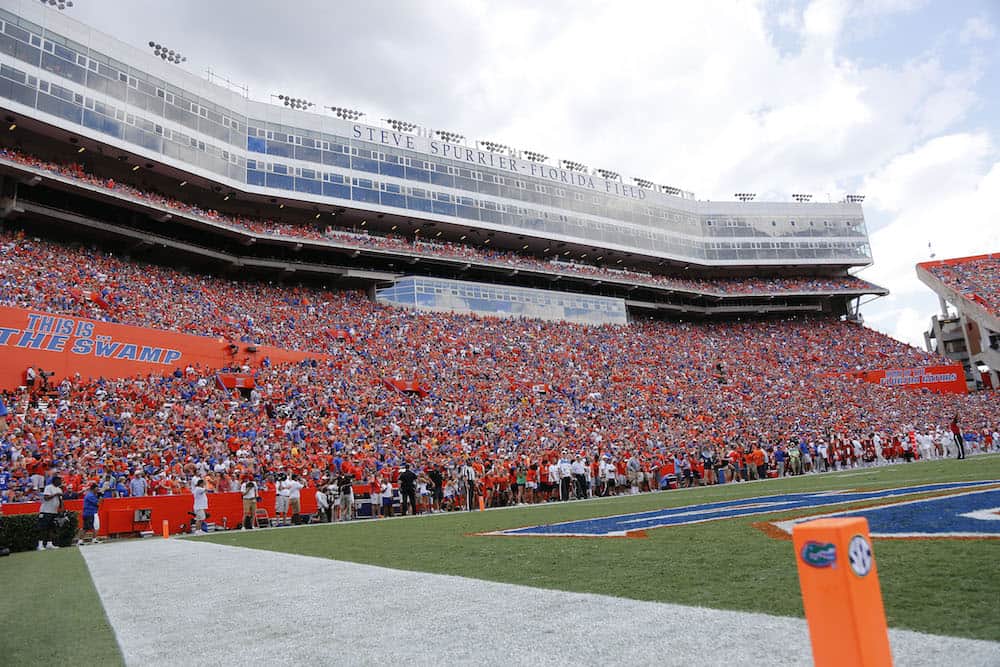 Hurricane Matthew has had a drastic effect on the statuses of college football games this weekend, with major ramifications for a game within the SEC.

The University of Florida has announced Thursday that their home game against SEC West rival LSU has been postponed due to the incoming hurricane.

“We had a very productive phone call today with a great spirit of cooperation between the universities’ presidents and athletics directors and it became clear that the University of Florida could neither host nor travel to a game this weekend considering the circumstances,” said Greg Sankey, the SEC commissioner said in the statement. “The developments of the hurricane in the last 24 hours, the projected magnitude of its impact and the unknown aftermath of this storm have resulted in this decision to seek another date to play the LSU-Florida game. We have to be sensitive to the possible imminent disruption to the state of Florida and in particular the Gainesville and surrounding area.”

Per the SEC release, they will attempt to reschedule the game. However, Florida and LSU do not have a common open date.

“At this time the schools do not have a common open date on which to reschedule the game,” the statement read. “So the schools and SEC Office will make every effort to find a scheduling solution with the possible movement of other games on the schools’ schedules.”

The statement continues by stating that LSU offered to host the game or travel elsewhere in order for the game to be played, however the University of Florida said that “…it was determined that the likelihood of damage from the storm, lack of available emergency personnel and the uncertainty of the impact of the storm on people, facilities and travel necessitated a postponement.”

With the status of one potentially impacted SEC game determined, the status of the Georgia-South Carolina game in Columbia remains in doubt.

The statement issued by the University of South Carolina on Wednesday stated that the game would remain in Columbia and an announcement on the game time would be made by Thursday afternoon.

As far as a make-up date for Florida at LSU, that looks unlikely. Since the two schools don’t share an open date, they could play on Dec. 3 if neither makes the SEC Championship Game, or on Dec. 10 around the Army-Navy Game (if allowed by the NCAA).

A third option, which is also unlikely, would involve the cancellation of two games. LSU is scheduled to host South Alabama on Nov. 19, while Florida hosts Presbyterian.

However, if LSU and Florida played on Nov. 19, that would mean LSU would have three straight SEC road games because the Tigers are at Arkansas on Nov. 12 and at Texas A&M on Thursday, Nov. 24 (Thanksgiving).

From the looks of it, LSU won’t be playing Florida in the regular-season in 2016.

The Florida-LSU game has been rescheduled for Nov. 19 in Baton Rouge.

Also, Presbyterian will now play at South Alabama on Nov. 19.

The idea of having USA play Presbyterian on 11/19, and having LSU go to Florida 11/19 makes perfect sense. 3 road games isn’t exactly a problem for LSU. If LSU doesn’t make the SEC championship, then USA can play LSU then 12/3 if they’re open, or 12/10. Presybterian can do the same with Florida if they don’t somehow pass Tennessee for the SEC East. Everyone gets games, and USA and Presbyterian get an extra.

Both LSU and Florida should pay USA and PC to play each other on 11/19 and LSU should just suck it up and play 3 straight road games. Either that or play 12/3 and move the SEC title game to 12/10. This ain’t hard folks.

It’ s not that easy. CFP committee sets the playoff teams and bowl games are set on Dec 4th! You just can move the tje SEC championship game.

CFP said last year that if Navy was in playoff contention, they would hold all selections until after the Army-Navy game. So they obviously can do that somehow.

Also, after the 9/11 attacks, the SEC Championship was pushed back one week. That was pre-playoff era, but still it shows that it can be accomplished if necessary.

I keep hearing the 9/11 connection, but let’s also acknowledge that 9/11 was a very unique circumstance. This doesn’t even come close.

Nobody said the two events were similar, just that there is a precedent for moving the SECCG back one week.

Is that really a precedent, though? I mean, the scope of 9/11 was massive. People were in a very different mindset then and, like I said, this event doesn’t even come close. 9/11 disrupted all of our lives, so moving a football game around (or a thousand football games around) didn’t really matter to anyone.

Plus, they had three months to plan. That time is cut in half here.

I just don’t think they will move the SEC championship game to accommodate Florida and LSU. It just makes very little sense to do so.

I’d tend to imagine that rescheduling any event that involves as many people, reservations, travel situations, etc., as a football game between two power-5 level teams is a logistical nightmare, even if there’s an obvious date and it’s a home game in a college town.

I’d think that throwing the neutral site game in an NFL team’s home stadium into the mix, a situation that would revolve around having to be concerned with several times as many hotel reservations and travel methods, and that would be moving that game from a week where the NFL team is away to a week when they would have a home game the next day (and who knows what else may or may not be scheduled there that weekend) would complicate things a lot more. Not saying they can’t possibly figure it out, but a lot goes into putting on football games of this magnitude beyond just moving around the dates…

It’s not as easy as just moving games to different weekends. It’s just not. If it were, they’d already have done that.

You’re rescheduling hundreds of people’s lives, from people who work the games to people planning to travel to the games to schedules for other events scheduled in those cities that may use some of the same facilities… not to mention hotel rooms.

It would take months to work all of it out, not the two weeks some of you think it can happen in.

Geez. I would rather they play the game… somehow. However, that may not be possible. Big deal. It’s a game. Move on.

That’s not going to happen. Jacksonville would never approve that, plus the Jaguars are at home the next day (Oct. 23).

Play it the week of the championship games like the BXII does, because these two won’t be in the SEC championship.

You may be correct but do not know that for sure, anything can happen.

CFP teams and a bowl games are set on December 4th! It looks like this game will not be played this season.

This is a very good compromise.

Alleva refuses to do anything but cancel the game, since UF couldn’t switch the game to BR instead, as USC did before. Time for the SEC to step in and put that jackalope in his place. The game is a conference game. Playing only 7 conference games isn’t acceptable.

Why was this game postponed to begin with? The storm will have long passed by game time.

It’s the Weather Channel Effect. Sadly 4 or so Floridians have died… But the eye of the storm stayed offshore, and the weather right now in Gainesville? Had the game just been moved to Sunday….

SEC drama queens. Buy out South Alabama and Presbyterian and play the game Nov 19. You can play 3 road games LSU. At 3-2 you’re not accomplishing anything this year anyway.

Florida does still have a shot, so does Georgia, its only halfway through the season, anything can happen.

Sankey could end up saying this: A team with only 7 conference games is ineligible for the championship, and for their share of conference money. What’s Florida going to do? Join the Big 12 in protest?

If you’re correct, then the SEC should investigate this, and possibly give UF a loss.

Other elements of the story include a new coaching staff at LSU had the Tigers hitting on all cylinders with Florida having inadequate time to prep for the new schemes. Also, you had a newbie SEC Commish dealing with a seasoned vet AD at Florida. The fact that there was a legitimate hurricane will give cover to all who wanted to not play the game last weekend. But, for me, these are all aspects seen from the outside looking in with no certain understanding of the conversations and intent. So, I could be wrong about all this but it just doesn’t look good.