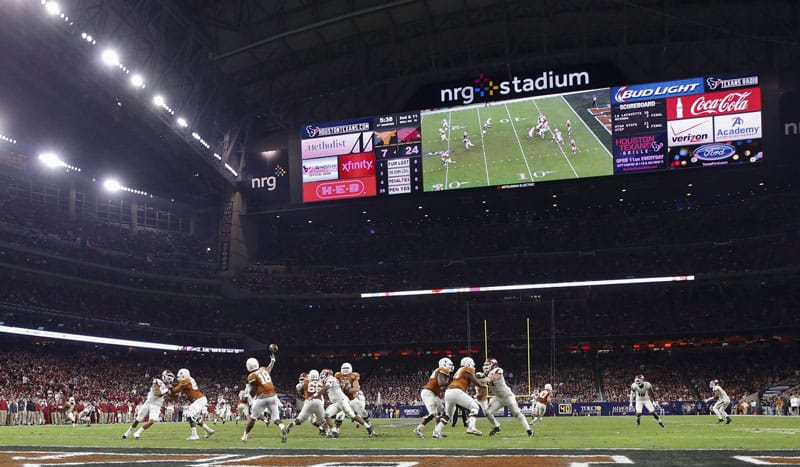 The LSU Tigers and the BYU Cougars will meet in the 2017 AdvoCare Texas Kickoff, ESPN and the schools officially announced this afternoon.

The game will be played at NRG Stadium in Houston on Saturday, Sept. 2, 2017 and an ESPN network will televise the game to a national audience. LSU and BYU have never met on the gridiron.

“We are excited about the opportunity to return to Houston for the 2017 season opener against BYU,” said Joe Alleva, LSU Vice Chancellor and Director of Athletics. “We opened the 2014 season against Wisconsin in NRG Stadium and the turnout and response from our fans far exceeded our expectations.

“Houston is a great city with a huge LSU alumni base and NRG Stadium continues to be one of the great venues for football. We look forward to opening the 2017 season against BYU in Houston in what should be another great start to the football season.”

LSU was previously scheduled to open the 2017 season at home against Georgia Southern. That game will be moved to another Saturday in 2017.

The Tigers are also scheduled to host Syracuse on Sept. 9 and Troy on Sept. 30. The Syracuse game will count towards the SEC’s strength of schedule requirement for that season.

“Any football team or fan who loves the game would be thrilled to have the chance to play a traditional powerhouse like LSU of the SEC in an awesome venue like NRG Stadium,” said BYU Director of Athletics Tom Holmoe. “We are excited and grateful for the invitation to play in such a great game.”

BYU now has nine or ten games scheduled for the 2017 season depending on the placement of a road contest at UNLV. The Cougars are slated to host rival Utah the week after LSU, and later host Boise State, San Jose State, and UMass.

The inaugural AdvoCare Texas Kickoff in 2013 featured Oklahoma State and Mississippi State, which was followed by LSU-Wisconsin in 2014. Other scheduled matchups include Texas A&M-Arizona State in 2015 and Oklahoma-Houston in 2016.

Why did the LSU AD recently make the denial of a game against BYU?

Because he’s a liar.

That comment he made was from Nov. 2013. Was there a more recent one?

No, same comment. Us old guys have long memories.

Waiting to hear confirmation on:

-2015-
Which game New Mexico St is dropping from schedule.

If I ran a pro stadium I’d never host BYU, most of the margins are made on pop and beer and all of the sister wives will fit into a mini van so even your parking takes a hit.

You would never be put in charge of running a pro stadium because you’re an idiot.

Nice bash on religion… Not sports. So many people like you bash on BYU because of their religion, but leave all other (many) religious schools alone because you are bigots. Do your research and you will see that any team or venue will host BYU due to how many tickets they sell at any arena in the US or world for that manner. ESPN doesn’t give exclusive contracts to just any school. Only 2 teams were on ESPN more than BYU. Mormons don’t practice polygamy, don’t have horns, and we aren’t a cult. We are simple Christians who keep the commandments, live life, and yes we do like football And tailgating like your buddies. We just don’t have to be sloshed to have a good time, but we are happy to let you enjoy your football how you please. Do you know that BYU’s starting running back is black, started as a 17 year old his freshman year and is not a member of the faith? His name is Jamal Williams and he will probably break BYU records held by similar individuals. Did you know Jim McMchaon is not Mormon and was just inducted into BYU’s hall of fame?

Mr. Smith, When are you up for parole? You must be serving time somewhere because you are certainly guilty of criminal stupidity.

You’d be surprised and I’m not kidding…. Mormons can party! I was in Salt Lake City a few years ago and the nightlife is kickin

Can’t wait for this game. Hopefully BYU will have a good team in 2017 and make a contest of out it.

BYU by their scheduling seems to want to prove they belong in a P5, the fact is most likely it will make them 8-4 or 7-5 every year.

There are a lot of P5 programs that would love to go 8-4 or 7-5 every year. The vast majority of G5 programs would go 2-10 or 3-9 with the type of schedules that BYU is putting together.

If BYU can average 8 wins with the more difficult schedules, they will indeed prove that they belong in the P5.

LSU still owes Tulane a game in New Orleans; it is time for LSU “just do it.”

And BYU and Tulane still have an unannounced scheduled game. When will that game be ?

This is going to be a great game. I’m pumped for college football.

I can’t wait until BYU and Memphis announce a future series!