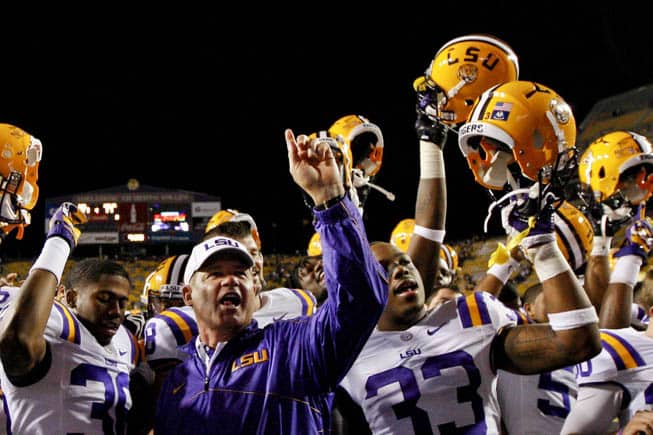 The LSU Tigers and the Arizona State Sun Devils have postponed their home-and-home football series for the second time, The Times-Picayune has reported.

LSU needed to move the 2016 game in order to travel to face Wisconsin at Lambeau Field in Green Bay on Sept. 3. Like the Badgers, the Tigers didn’t want to play the neutral site game and then face a tough opponent the following week.

With the removal of Arizona State, LSU senior associate athletic director Verge Ausberry said the Tigers are pursuing a BCS opponent to fill the void in the 2015 schedule on Sept. 12.

LSU was previously slated to open the 2015 season at home vs. Jacksonville State on Sept. 5, so that game has likely been bought out or postponed.

The Times-Picayune also reports that LSU and Tulane are in talks to open the 2015 season at the Mercedes-Benz Superdome in New Orleans.

Back in 2009, LSU canceled a 10-year contract with Tulane. However, LSU stated at the time that they would play one more game against Tulane in New Orleans.

“We have had informal discussions with the people at Tulane,” Ausberry said. “We have to agree to a price. It’s a good game for both schools, both schools will make money.

Yeah that was moved from BR to Tempe because of Katrina. Since ASU donated all the money from the game they decided that game wouldnt count as part of the agreement.

Just heard about this. What a bummer! We (ASU fans) were looking forward to visiting Death Valley in 2015. Hopefully they play each other sooner than later