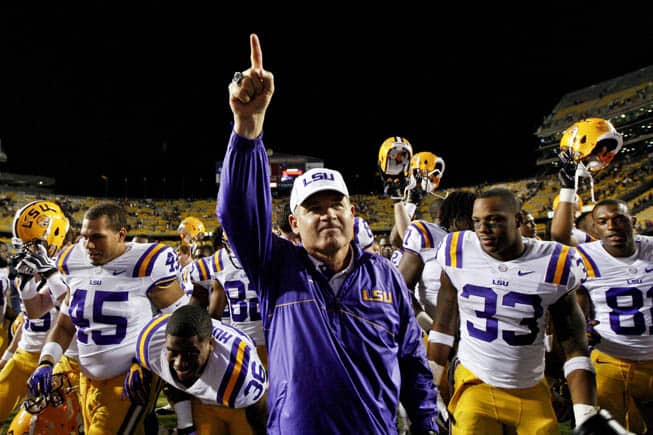 The 2014 SEC Football Schedule has yet to be released, but information on potential match-ups, or lack thereof, continues to trickle out.

Earlier this month, Cecil Hurt of the Tuscaloosa News reported that Alabama would likely be playing Florida in 2014. Hurt then replied to us on Twitter that a rumored Alabama-Georgia match-up in 2014 had been pushed back to 2015, although he later deleted that Tweet.

Yesterday, LSU athletic director Joe Alleva told The Advocate that the Tigers will not play Georgia or South Carolina in 2014.

“I’m shocked the schedule isn’t out yet,” he said. “When we left Destin, they told us a few schools had to move some games. We weren’t one of those.

“It sounded relatively quick and easy, but it isn’t done yet. But there will be no Georgia or South Carolina.”

Although the 2014 schedule will again be considered a “bridge” and not part of any long-term format, it was already obvious that LSU wouldn’t host Georgia in 2014. The Tigers visit Athens this season, and under new rules adopted last year by the SEC, rotating cross-division games will not be played in back-to-back seasons. Rather, they will be played in succession.

Without Georgia or South Carolina as LSU’s 2014 rotating cross-division opponent, that leaves the Tigers with four possible options: Kentucky, Missouri, Tennessee, and Vanderbilt.

LSU already plays Florida from the East as their permanent cross-division rival. But head coach Les Miles and Joe Alleva have been lobbying to do away with the permanent rivals due to a “competitive imbalance.”

“It’s going to happen,” Alleva told The Advocate regarding the two-game series.

The two schools will open the 2014 season at Reliant Stadium in Houston. They will then meet in a future season at Lambeau Field in Green Bay. The date of that game, and possibly the financial details, are the only remaining contract issues to be resolved.

Wisconsin has already cleared the way for opening the 2014 season against LSU. The Badgers were slated to open next season at Washington State, but postponed the entire home-and-home series to 2022 and 2023.

I’m thinking adding Mizzou and A&M has scrambled the SEC leaders brains to the point that they cannot come up with a set permanent schedule for each time. Pathetic.

I’m sure that they care about your opinion on the matter, Rich. Clearly you understand all the politics involved and the needs for balance and travel costs and the various requests for changes in the future. You must be omnipotent.

ATL..pretty sure the word you are looking for is omniscient! NOT omnipotent..

Not really. I just think the SEC is an overrated joke where all-american football players and number 1 draft choices have lower IQs than my dog.

7 in a row joke Ritchie boy so put that in your pipe and smoke it. You are just a hater and by the IQ crack dare I say a racist.

HI PNB I think what Ritchie is trying to say is a one loss or 2 loss SEC TEAM ALWAYS GETS THE benefit of the dought ,just because some people disagree with u that does not mean people hate the SEC but when 2 sec teams play for the bcs there it is a little political and why does L S U don’t want to play Florida because its a tuff game and L S U knows if its a tie the SEC RULES why because they got the big TV CONTRACTS and unfortunately MOSTLY all the major colleges don’t care what grades the kids get anymore ,unless u go to navy or army or air force OR byu ,ever see that special on CBS about that NAVY FOOTBALL PLAYER and his scheudle

It’s racist to call somebody out on their lack of intellect? Wow. I would think million dollar universities exploiting young minorities for the sake of the almighty dollar would be worse but I guess not in this day and age. I’m more impressed with the young men who ACTUALLY GRADUATE and let their brains and education improve their lives, not where they played football.

6 in division, 3 out of division. It’s not rocket science.

2 out of division in an 8-game schedule