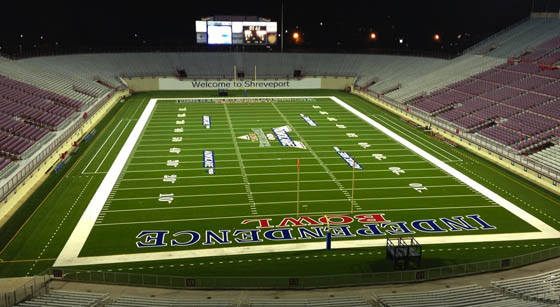 Hurricane Isaac has forced the postponement of another 2012 college football game. Louisiana Tech and Texas A&M have moved their Thursday night match-up to Saturday, Oct. 13.

No other changes to Louisiana Tech or Texas A&M’s schedule was necessary since both schools were set to be off on Oct. 13.

“Our primary concern was for the health and safety of the general public, students and fans of both institutions,” Tech athletic director Bruce Van De Velde said. “It’s impossible to predict exactly what is going to happen throughout the state so we also wanted to be conscientious of the possible effects of his storm on residents throughout Louisiana.”

“As much as both teams wanted to play, the safety of everyone took precedent over a football game, even one of this magnitude. We simply couldn’t move forward with Thursday’s kickoff in good conscience knowing what this storm may do. We appreciate the cooperation of Mayor Glover and the City of Shreveport and the Independence Bowl as well as Texas A&M University.”

The game was set to be played at Independence Stadium in Shreveport, Louisiana. A new kickoff time, as well as television coverage, will be announced at a later date. ESPNU was slated to televise the game, but that may not be feasible on the new date. As MattSarzSports.com  indicates, the game could likely be on ESPN3 only.

Texas A&M will now play their first game as a member of the SEC against the Florida Gators at home on Sept. 8. The Aggies will play 12 straight games without an off week.

The Bulldogs will also play 12 games without an off week as a result of the move. Louisiana Tech now opens the 2012 season on Sept. 8 at Houston.

Earlier today, South Alabama announced that their season-opener against UTSA on Thursday has been moved to Saturday, Sept. 1.

They also announced that would be no refunds. Bad news for those of us with tickets to other games on that date.

Well if anyone has tickets for sale im interested.

I heard that Texas A&M had suspended two starters for the “season opener”. Since now game #1 is with Florida, Coach has changed his tune and said those same two players are now “suspended for the LA. Tech game”.

Typical top-40 attitude about winning first. Those 2 players should be sat down next Saturday…..