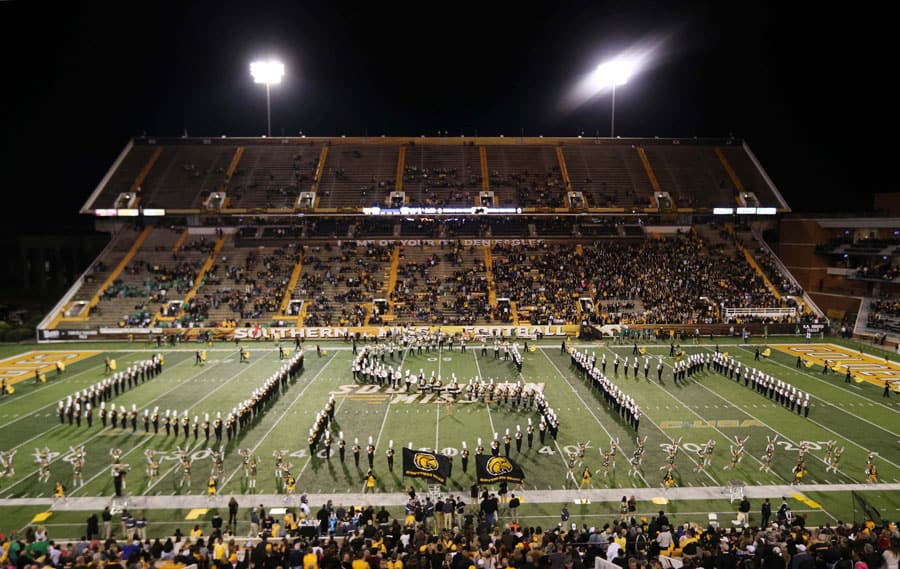 The Kentucky Wildcats and the Southern Miss Golden Eagles have scheduled a home-and-home football series for 2016 and 2017, the schools announced today.

In the first game of the series, Kentucky will host Southern Miss at Commonwealth Stadium in Lexington on Sept. 3, 2016. The Wildcats will then travel to face the Golden Eagles at M.M. Roberts Stadium in Hattiesburg on Sept. 2, 2017.

According to a copy of the game contract obtained by FBSchedules.com, Kentucky will pay USM $200,000 for the game in Lexington. The Wildcats will not receive any payment for the game in Hattiesburg.

FBSchedules.com also learned today that Kentucky will host Austin Peay on Nov. 19, 2016 and will pay the Governors a $375,000 guarantee.

Kentucky is scheduled to close the season at arch-rival Louisville on Nov. 26. UK needs one more non-conference game to complete their 2016 schedule.

Southern Miss has completed their 2016 non-conference schedule with the addition of Kentucky. The Golden Eagles are also set to host Austin Peay on Sept. 10 and Troy on Sept. 17 and travel to LSU on Oct. 15.

USM was previously slated to play at BYU Nov. 19, 2016, but that game will be moved to another season per Golden Eagles athletic director Bill McGillis.

McGillis also announced that Southern Miss’ game at Tennessee in 2017 has been pushed back from Sept. 2 to Sept. 16.

I suspect this means UMass will be in Provo Nov. 19, 2016. BYU still needs two home games.

Paging AD Ingram at UAB, get that 2016 Kentucky game back, stat.

What happened to Miami (Florida) U playing a home and home with Southern Miss? Did that deal fall through or are they still going to play?

Disappointed the Southern Miss backed out of the November 19th BYU game on such short notice. I understand that lately SM has been playing for a paycheck and my guess is that SEC Kentucky is paying a lot more (and is closer to home).

BYU should contact Kansas State ASAP. They have an open ROAD GAME in 2016.

Kansas State would never again schedule a decent out of conference team like BYU. They want more cupcakes like South Dakota.

Dave. I’ll have you know south dakota is he only team to play NDSU and not lose to them. AKA the coyotes beat the national champion.