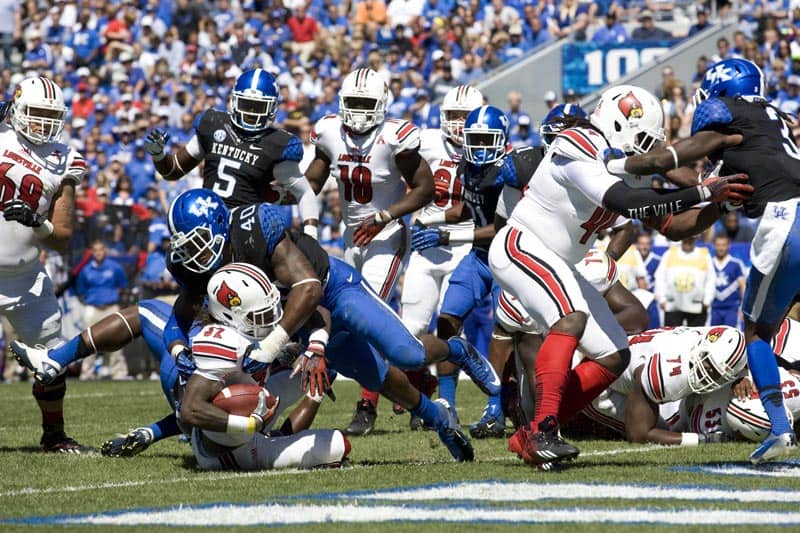 Kentucky and Louisville will continue their annual battle for The Governor’s Cup through the 2019 season, according to a copy of the contract extension obtained from both schools.

Back in August 2013, Kentucky and Louisville extended their contract through 2016 and included the following game dates:

The most recent extension to the contract, dated July 1, 2014 and signed by both athletic directors, continues the Kentucky-Louisville series on the last game of the regular-season:

From 1994 through 2006, Kentucky and Louisville met the opening weekend of the season. Then in 2007, the match-up was moved to the third game when played in Lexington but remained as the season-opener when played at Louisville.

With the Kentucky-Louisville rivalry moved to the regular-season finale beginning this season, the match-up now coincides with several other ACC-SEC rivalry games, including Clemson-South Carolina, Florida-Florida State, and Georgia-Georgia Tech.

The two in-state rivals first met in 1912 and have squared off annually since 1994. Kentucky currently leads the all-time series 14-12.

Getting to the ACC sure worked out for Louisville. Had the XII taken them over WVU, they’d be stuck in a 9-game conference schedule, and no ability to play UK like this. With the ACC and SEC sticking to 8-game, there’s an incentive to schedule these end-of-season P5 matchups. (Plus, they have the advantage of not affecting the conference’s championship setups as much since they’re OOC games.)