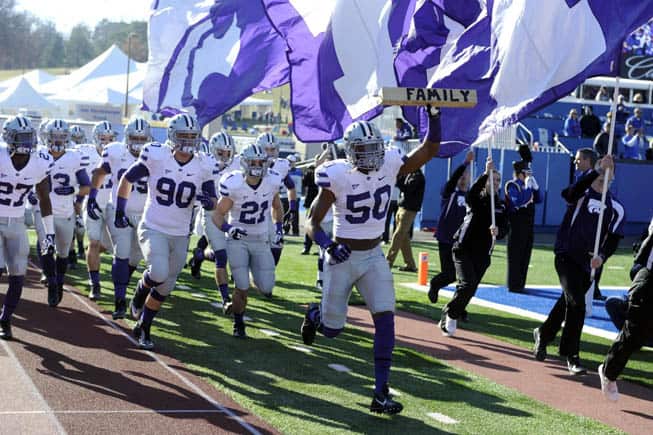 Currie stated that the Wildcats will host the Miners on Sept. 27, 2014. The two schools have met twice in their history with UTEP winning in 1947 and Kansas State coming out on top in 1999.

With UTEP set for Sept. 27, K-State now has two consecutive open dates early in the season on Sept. 6 and Sept. 13. They are also off on Nov. 15. But there still could be some movement of games on their 2014 schedule according to Currie (MP3 audio).

“There’s a chance that one of our conference games will slide up into that second window so we don’t have two byes in a row. But that affects a lot of other people in the conference, and a lot of other things, and even teams in other conferences.”

Currie went on to mention that their game vs. Auburn could move to a Thursday night.

“And there’s also the possibility that you could see that Auburn game shifting to a Thursday. It’s quite possible. But regardless, it’s going to be a huge, huge national home game for us.”

Currie stated that their possible early-season Big 12 game would be Sept. 6. The Auburn game, currently slated for Sept. 20, would then move back to Thursday, Sept. 18 in order to preserve the Sept. 13 open date that each team has prior to the game.

“Auburn is open on the 13th so we’ll want to have the same kind of equity, or equality, in terms of preparation time. So if people are looking for a day to plan their wedding, it’s Sept. 13 (2014).”

The El Paso Times reports than UTEP has bought out their Sept. 20, 2014 home game vs. Colorado State to instead play at Kansas State.

Does Auburn have to agree to a Thursday night game or is it all controlled on the K-State side of things (including TV)?

I think that the home team has the TV option meaning, it could be either on ESPN or FOX Sports 1. Now, I also think that Auburn has to agree to make it a Thursday night game.

When they sign the contract, they negotiate all the terms including whether or not a game can be moved.

Thanks, just found it.