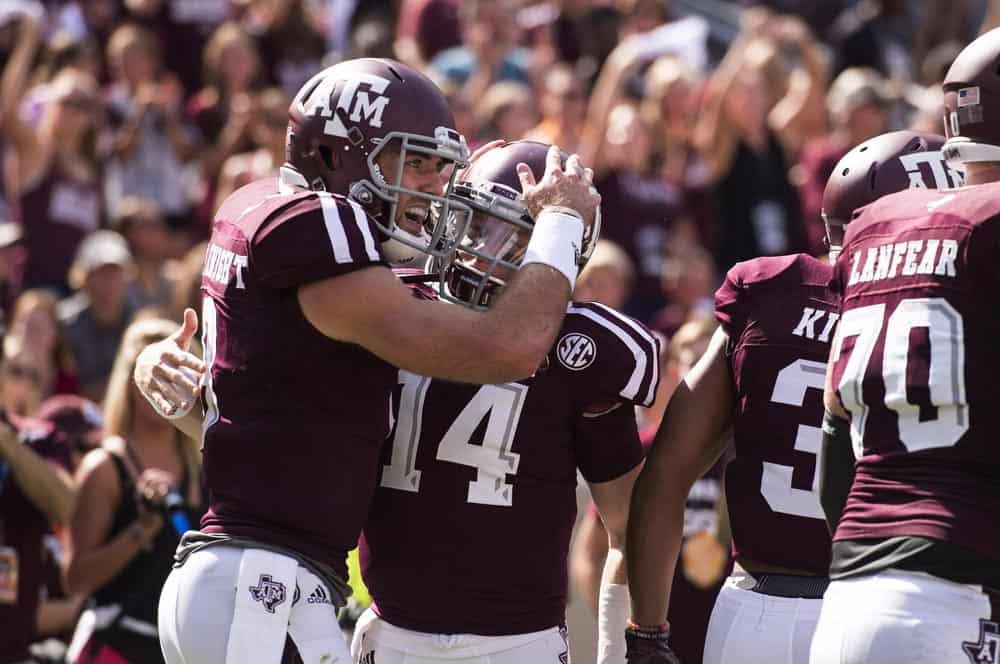 The biggest shocker from the first CFB Playoff Rankings is 7-1 Texas A&M at No. 4 while 8-0 Washington is No. 5.

It means that if the Playoff bracket were fielded today, the Aggies would be in while the Huskies would be relegated to the Rose Bowl, despite being undefeated. It also sets a precedent for the position each team will be ranked from in the weeks ahead. In other words, Washington has to climb while Texas A&M has to fall.

Though there many different ways to approach the question of which team is better (without actually playing one another), the CFB Playoff committee has been clear on its ranking criteria.

Given that the two haven’t played head-to-head, don’t share any common opponents and it’s too early to award conference titles – the comparison comes down to strength of schedule.

First, take a look at the two team’s slates through Week 9.

Next, let’s compare the two straight up, including the current records and rankings of their combined opponents.

Both teams have played six Power 5 opponents, one from a Group of 5 conference, and one FCS team.

The big difference comes down to the quality of the set of opponents. Where the Huskies have played only two teams (Stanford and Utah) which currently have a record over .500, the Aggies have played four (Auburn, Arkansas, Tennessee, and Alabama).

Similarly, where Washington has one past opponent currently ranked in the Top 25 (No. 16 Utah), Texas A&M has two (No. 9 Auburn and No. 1 Alabama). It also makes the Aggies the only one of the two who has faced a Top Ten opponent.

Finally, there is combined winning percentage, the Huskies’ seven FBS foes are 25-32 on the season vs. the Aggies’ 33-23. It works out to 15% advantage for A&M.

So, Texas A&M’s schedule has been more difficult than Washington’s through nine weeks of play.

That said, the issue with comparing the two, or ranking the two, is that the Aggies have one loss (at No. 1 Alabama) while the Huskies are still running the tables.

If you take the Alabama game out of the mix, A&M is still the only one (of the two) which has beaten a current Top Ten opponent (No. 9 Auburn) and it still holds the advantage in combined winning percentage (25-23 or 52% without Alabama).

If strength of schedule is the yard stick, the Aggies hold a slight advantage, despite the loss.

Can Washington Catch Up with Texas A&M?

Here’s how each team will finish its season.

And, here’s the comparison:

The differences here swing the other way. First, Washington plays four Power 5 opponents vs. Texas A&M’s three, bringing the total on the season to ten for the Huskies vs. nine for the Aggies. This is a reflection on the Pac-12’s decision to play nine league games vs. the SEC’s eight.

Next, Washington has three opponents (USC, Arizona State, and Washington State) with winning records remaining vs. A&M’s one (LSU). Straight up it’s a combined 20-13 mark vs. a 10-14 record.

The only advantage for the Aggies is that LSU is ranked higher than Washington State. Of course, this could all change by season’s end, especially with the Tigers hosting the Crimson Tide this weekend.

Overall, the message is clear – Washington’s finishing schedule is more difficult than A&M’s.

Beyond that, the Huskies will get a huge bump if they win the North and go on to beat the champion of the South in the Pac-12 title game. It would give them 11 wins over Power 5 teams, and more than likely earn them another ranked opponent. This vs. the Aggies’ cap of only nine such games. The only way they play in the SEC Championship is if Alabama loses two of its final four games.

Here’s the comparison if both teams win out, the Aggies at 11-1 and the Huskies at 13-0. Washington’s numbers include a win over a ranked team in the Pac-12 title game.

Keep in mind that these numbers include Alabama, which with an 8-0 record pushes A&M’s opponents’ winning percentage up. Taking it out, since it’s a loss, drops it to 48.61%, or just one percent higher than Washington’s. It also drops the number of winning opponents down from six to five and ranked from three to two.

Think about it as “teams beaten” rather than “teams played.”

So, while the committee might have gotten it right this week – if both teams win out it’s reasonable to think that Washington will regain an edge and a spot in the bracket over Texas A&M.

Especially if the Huskies have just won a Power 5 conference title while the Aggies sit home.

More difficult because they have more average teams to play? Seems more logical that loses come from good teams not average teams when you’re trying to win the title

Well that question was put to rest today when the Aggies lost to Mississippi State 38-25.