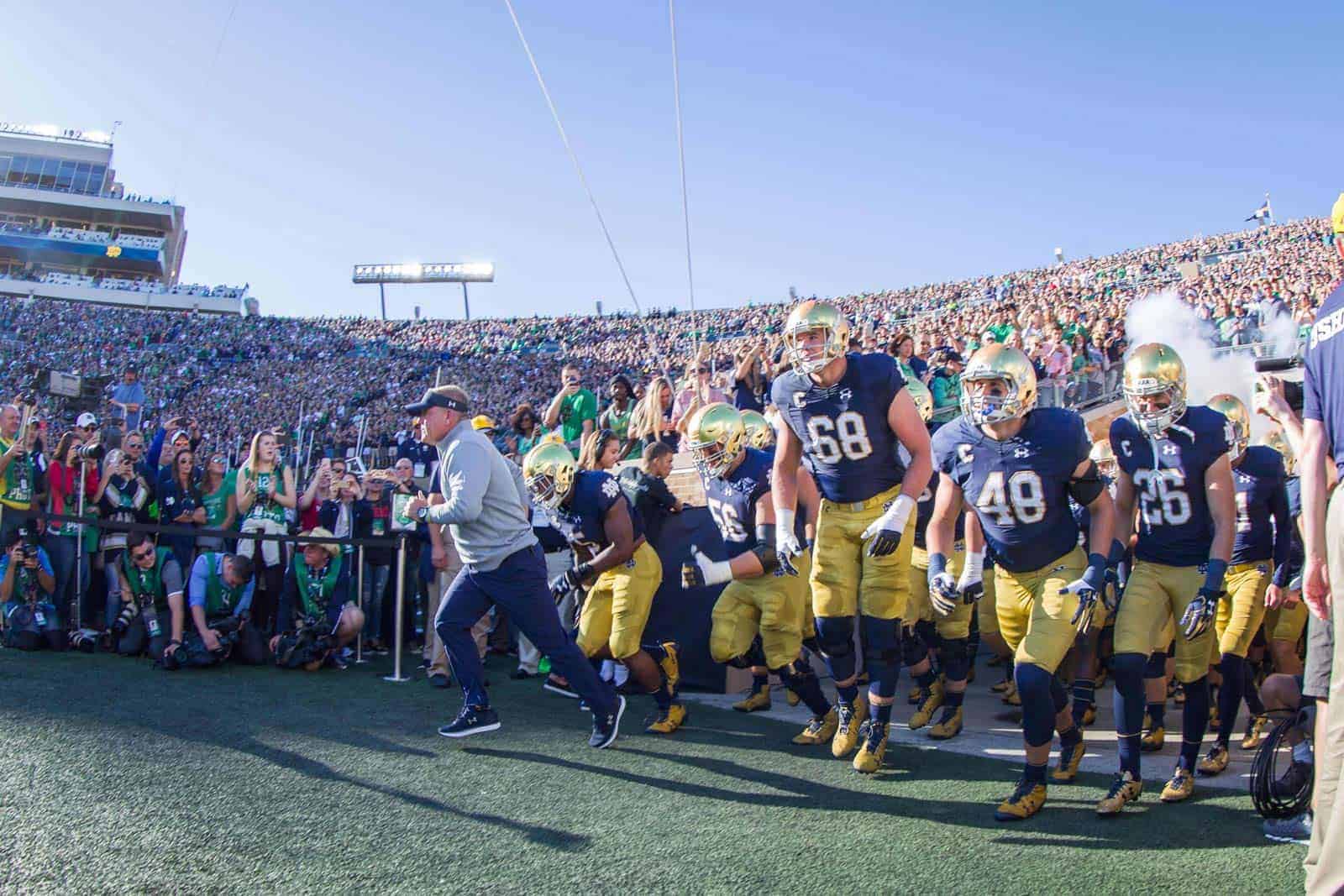 In its conclusion, it summed up Swarbrick’s approach to wooing the CFP committee.

…as an independent it’s Notre Dame’s duty to build the resume with a 12-game schedule that matches or eclipses any 13-game slate a conference team might have with a league playoff.

In other words, if both Notre Dame and Georgia finished the regular season 11-1, and the Bulldogs went on to beat, let’s say Auburn, in the SEC title game, the 11-1 Irish would either be tied with or leap frog 12-1 Georgia and make the CFP bracket. That would happen because of the overwhelming difficulty of Notre Dame’s regular-season schedule.

An undefeated or one-loss Notre Dame would throw a tremendous wrench into the playoff picture. Think about it – four playoff slots and five Power conferences. There is already one league left out, which means deeming the Irish’s 12-game resume as superior to a 13-game body of work from a Power conference champion would relegate two title holders to meaningless bowl games.

The truth is, we don’t know what the committee would do with an 11-1 or 12-0 Irish team. That’s because Notre Dame hasn’t finished with fewer than three losses since the CFP era dawned in 2014.

What we can do is objectively compare the blueprint of Notre Dame’s schedule with that of the four programs who have made the CFP bracket more than once. In each case, the resumes have passed muster with the committee.

The Irish play Stanford, USC, and Navy every season. On top of that, they are committed to five ACC opponents per year. That leaves four “other” games to openly schedule. Despite its independent status, these elements make Notre Dame’s schedule footprint very similar to the eight-league/four-other game format used by the ACC and SEC.

The Irish consistently schedule two Power schools with their four “other” openings, the remaining two go to non-Power FBS programs. They do not schedule FCS opponents.

The Crimson Tide play eight SEC games every season – six against fellow West division members, Tennessee (their permanent cross-division rival), and a rotating member from the East. That leaves four “other” opponents.

In non-SEC action, Alabama plays one Power school (at a neutral site), two non-Power FBS foes, and one FCS opponent each season.

Though not a part of the regular-season schedule, the Tide have beefed up their resume three of the last four years (or since the CFP scheme began) by playing a 13th game via the SEC championship – (14) Missouri in 2014, (18) Florida in 2015, and (15) Florida in 2016. This game counts as an additional (plus-one) Power opponent.

Like Alabama, Clemson plays eight ACC games annually – six vs. fellow Atlantic members, one vs. Georgia Tech (the permanent cross-division rival), and one vs. a rotating member of the Coastal division. This also leaves four “other” opponents.

Clemson has added an additional non-ACC Power opponent to its annual game vs. South Carolina each season since the CFP kicked off in 2014. Its drawn an additional SEC opponent three times and hosted Notre Dame once. It’s used the remaining two openings for one non-Power FBS foe and one FCS opponent.

Ohio State plays nine Big Ten opponents annually – all six fellow members of the East division and a rotating three from the West. That leaves three “other” opponents.

It’s important to note that this practice (nine and three) began in 2016 – before that, it was eight league games and four others. This was the blueprint when OSU made the CFP bracket the first time, in 2014.

Since 2016, the Buckeyes have scheduled one non-Big Ten Power opponent and two FBS non-Power schools. In 2015 and earlier, the format was one and three. Ohio State has not scheduled an FCS opponent in the CFP era.

The Buckeyes won the Big Ten championship over (11) Wisconsin in 2014, their first trip to the CFP, but did not participate in the league title game in 2016 (their second trip up).

Oklahoma plays nine Big 12 games, facing each-and-every other member of the conference on an annual basis. Like Ohio State, that leaves three “other” opponents.

The Sooners schedule one non-Big 12 Power opponent and two non-Power FBS programs annually. They also do not schedule FCS opponents.

Since the Big 12 championship game didn’t resurface until 2017, Oklahoma did not participate in a 13th Power matchup in 2015 (its first trip to the CFP bracket). It did do so in its second appearance – last season, toppling (10) TCU in the title game.

The bottom line is that the Irish play, at minimum, one fewer quality opponent per year. If Ohio State would have played in the Big Ten title game coming into its most recent CFP appearance (and therefore played 11 Power games), Notre Dame would be minus-two in quality opponents vs. every other team less Alabama.

It’s only fair to note that the Irish are slated to play 10 Power foes in 2018 (something that hasn’t occurred since 2014 and isn’t due again until 2020), adding a Power opponent to it’s “other” category. Even if they were to win out and go 12-0 with this scheduling anomaly, they would play one fewer quality opponent than an undefeated champion of the Big Ten, Big 12 or Pac-12. They would also fall one Power game short of Clemson or Florida State, who both have two Power non-ACC opponents scheduled for 2018.

Though there are lots of variables to consider, and its not truly an apples-to-apples comparison, it would be very difficult to argue that the Irish’s 12-game regular-season slate is obviously more difficult than a league champion from any of the Power 5 conferences.

If you’re thinking that Notre Dame’s set of opponents, from top to bottom, is superior to that of the other programs mentioned, you may have a point. But it’s a hard argument to stick, because the target is always moving. In other words, opponents that appear to be “quality” are better some years than others. Stanford and USC, annual opponents for the Irish, are prime examples.

Again, while it would be inconceivable to argue that Notre Dame’s schedule isn’t tough, it’s almost impossible to assert that its strength is such that it would trump a 13-game championship run in the Power 5’s.

May I offer a counterpoint? Whether ND’s schedule is equivalent to the power conference champions’ is actually highly variable from year to year. For example, in 2017 it was actually stronger than any of them. Based on the final committee rankings (the ones before the bowls that determined the playoff), ND played (3) Georgia, (8) USC, (10) Miami, (13) Stanford, (16) Michigan State, and (24) NC State. So 6 top 25 teams and 3 in the top ten.

So Notre Dame’s 2017 schedule was tougher than any playoff participant or power conference champion’s (though weaker than Auburn’s and possibly Maryland’s). As you establish in the article, it’s certainly not like that every year, but it is possible for ND’s 12 games to beat everyone else’s 13 games. The problem is, it needs to happen in a year when ND is actually good enough to take advantage of it, which hasn’t happened in a while.

The analysis is a bit oversimplistic.

Notre Dame’s regularly scheduled non-power opponents (Temple, Navy, BYU) are at least equivalent to low / mid-tier Power5 programs. How is Clemson getting a pass on Wake Forest / Syracuse etc, or Oklahoma with Baylor / Kansas / Iowa State on their schedule? Those are “Power Programs” only by association, not by the merit of their on-field performance. The SEC is probably the strongest league top to bottom, but they are notoriously shy in scheduling OOC foes – Alabama schedules 1 neutral site Power5 team then mails in their other 3 matchups. The SEC also has that league-wide “bye” week in November where everyone feasts on FCS cupcakes to the ire of their fanbases as well as ESPN who has to send those games to their 3rd tier partner because they can’t televise that crap.

It sort of depends on how you define “quality opponent,” though. If you equate quality opponents with “Power 5 opponents,” then your “bottom line” is valid. But there much room for disagreement with that characterization.

I used S&P percentiles to evaluate strength of schedule. S&P might not be perfect, but it’s a better evaluator of a team’s quality than whether it is in the power 5 or not, and also a better evaluator than how many “ranked” teams it plays. I looked at teams below the 40th percentile.

Oklahoma played two very weak power 5 teams last year: Baylor and Kansas, basically guaranteed wins. Similarly, Alabama played Vanderbilt, Arkansas and Tennessee. Georgia played Vanderbilt, Missouri, Kentucky and Tennessee; Ohio State played Rutgers, Maryland, Nebraska and Illinois; and Clemson played, well, Syracuse. (The average percentile of Clemson’s opponents was 67, while Notre Dame’s was 71.5. All the others were a good deal lower.) The weakest team that Notre Dame played was North Carolina, one of the nine Power 5 teams on the schedule — and the only team they played, Power 5 or otherwise, that was below the 40th percentile.

Ohio State deserves credit for scheduling a tough non-conference slate, but they are dragged down by the weakness of the “quality opponents” at the bottom of the Big Ten. The top teams in the other conferences have to play similar “quality opponents,” too.

Aside from five conference games, Notre Dame can work out whatever schedule it wants to. As you mention, it schedules two of the best teams in the Pac-12 every year as well as Navy, who is a better opponent than three or four of the “quality opponents” that each conference team has to play each year. It also schedules two or three more of the (usually top) Power 5 teams from other conferences: Georgia and MSU last year, Michigan, Vanderbilt (ok, I did say usually top) and Northwestern next year, and Georgia and Michigan in 2019. So, not only do they schedule nine Power 5 opponents, four of those are usually much better-than-average Power 5 opponents.

For these reasons, I disagree with your “bottom line” assertion. The fact that Alabama’s 12-game non-championship run trumped Ohio State’s 13-game championship run last year suggests that the Playoff Committee does too.

The playoffs are crazy and I personally don’t believe they are the best solution. Fix is fairly simple. All teams enter a conference (including ND). Go to conference title game and win it. Power 5 conferences winners get automatic bids. 3 at large bids. Central Florida’s of the world or if a Alabama 12-0 vs Georgia 12-0 example. Loser can still qualify with a loss but a much lower seed and 1st round game.